Atrial septal aneurysm (ASA) is a risk factor for arterial embolism, as it frequently co-exists with an atrial septal defect (ASD) or patent foramen ovale (PFO). The incidence of ASA, depending on the imaging method, is 0.2–4% transthoracic echocardiography (TTE) and 2–8% transesophageal echocardiography (TEE). Despite prior reports concerning paradoxical embolism through a PFO, the magnitude of this phenomenon as a risk factor for a stroke remains undefined because deep venous thrombosis is infrequently detected in such patients. Atrial dysfunction and atrial arrhythmia, such as atrial fibrillation (AF), might represent an alternate and additional mechanism for arterial embolism in these patients [1–3].

Recently, the assessment of left atrium (LA) deformation profiles obtained by deformation imaging has been proposed as an alternative method of exploring LA function and to detect early changes in LA myocardial performance. Several studies have shown that LA stiffness increases with atrial remodeling and reflects a deteriorated reservoir function [4–6].

However, to date, little has been known with regard to the change of LA mechanical function, including LA stiffness, in patients with ASA.

Selection of the patients

Entry criteria included the presence of ASA determined by echocardiography and sinus rhythm on surface electrocardiogram (ECG). A physical examination, medical history and blood biochemistry testing were conducted in both patient groups. The subjects were defined as hypertensive if their blood pressure was ≥ 140/90 mm Hg or if they were receiving any antihypertensive medication. Diabetes mellitus was defined as a history of antidiabetic medication use or a fasting glucose level > 126 mg/dL. Smoking status was classified as smokers and those who never smoked. Patients with coronary artery disease, heart failure, valve disease, cardiomyopathy, hypertension, diabetes mellitus, chronic lung disease, thyroid dysfunction, anemia, and renal and hepatic insufficiency were excluded from the study.

M-mode, 2D, pulsed and color-flow Doppler echocardiographic examinations of all the subjects were performed by the same examiner using a commercially available device (Philips IE33; Philips, The Netherlands) (equipped with a 1–5 MHz phased-array transducer). During echocardiography, a single-lead ECG was recorded continuously.

Tissue Doppler imaging echocardiography was performed by transducer frequencies of 3.5–4.0 mHz, adjusting the spectral pulsed Doppler signal filter until a Nyquist limit of 15–20 cm/sn was reached, and using the minimal optimal gain. The monitor sweep speed was set at 50–100 mm/s to optimize the spectral display of myocardial velocities. Myocardial peak systolic s’, cm/s), early (e’, cm/s), and late (a’, cm/s) diastolic velocities were obtained by placing a tissue Doppler sample volume in the basal segments of lateral and septal walls for the LV. Each parameter was measured as the average of at least 3 consecutive beats.

LV mass was calculated by the Devereux formula and then indexed to body surface area [8].

Assessment of the LA function by 2D STE

The global systolic LA myocardial strain was measured by 2D STE [13]. Gray scale image of apical 4-chamber views was obtained with the frame rates of 50–80 Hz. Analysis was performed using QLAB advanced quantification software version 7.1 (Philips, The Netherlands). Automated tracking of myocardial speckles was reviewed and manually adjusted as minimally as possible. The cardiac cycle was demarcated by indicating QRS onset. Peak atrial longitudinal strain parameters were assessed as the average of 6 segmental values in apical 4-chamber view demonstrated in Figure 1. In this study, to derive a noninvasive dimensionless parameter, the ratio of E/e’ to LA peak strain was used to estimate the LA stiffness [5, 14, 15]. 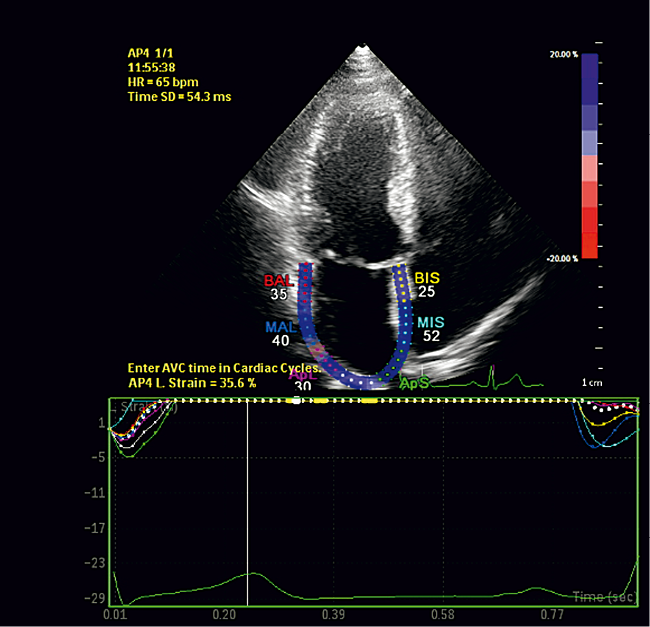 The SPSS 16.0 statistical program (SPSS, Chicago, IL) was used for the statistical study. All values are given as mean and standard deviation. Values between different groups were compared using the independent-samples t-test. The χ2 test was used to assess differences between categorical variables. P < 0.05 was considered significant. The correlation between LA strain and stiffness and LA volume indices were evaluated using Pearson’s correlation co­efficient.

There was no statistically significant difference between the patient group and the control group with regard to age, gender, heart rate, diameters of the LA, right atrium, LVEF, pulmonary artery systolic pressure, and body mass index (Table 1).

The main findings of our study are that patients with ASA showed a decreased global LA peak strain and an increased stiffness compared to the control subjects. LA strain and stiffness were strongly correlated with LA volume indices.

ASA is a risk factor for arterial embolism, as it frequently co-exists with ASD and PFO. Despite prior reports concerning paradoxical embolism through a PFO, recently suggested LA dysfunction and atrial arrhythmia, such as AF, might represent an alternate and additional mechanism for arterial embolism in these patients [15].

In previously published studies, the incidence of AF in ASA patients ranged from 0% to 23% [16, 17]. Janion et al. [2] reported that p wave dispersion and paroxysmal AF was higher in ASA patients.

In another study, it was reported that supraventricular arrhythmia and p wave dispersion was higher in ASA patients than in the control subjects [18].

Rigatelli et al. [3], in a study of 98 patients with ASA, found that LA dysfunction was higher in the patient groups.

We also demonstrated that impaired right and left atrial appendage function was higher in the ASA patients [19]. These studies, suggesting that the ASA may cause LA dysfunction.

Recently, LA myocardial strain has been confirmed as a reliable index that represents the magnitude of atrial deformation [20].

In our study, LA strain was found to be lower in the patient group and it is believed that this may be related to atrial arrhythmia more common in those patients. Moreover, LA stiffness was higher in patients with ASA.

The most significant limitation of our study was the insufficient number of patients. Other limitations are that our study was not prospective and that the patients were not followed up for arrhythmias. Additionally, the degree and direction of protrusion was not considered.

In conclusion, this study demonstrated that LA strain was lower and stiffness was higher in ASA patients. These results are consistent with a few studies indicating an association between ASA and atrial dysfunction and paroxysmal AF.

The impaired strain and increased stiffness in the atrial myocardium may cause AF and arterial embolism in patients with ASA. It is clear that further comprehensive studies are needed regarding this issue. STE is a sensitive tool to assess impairment of LA mechanics, which is detectable in absence of changes in atrial size and volume, and may represent an early sign of atrial dysfunction in patients with ASA.