Mortality in low- and very low-risk patients undergoing cardiac surgery: Evaluation according to the EuroSCORE II as a new standard

Behind this process, cardiac surgeons in developing countries try to reproduce these results. However, it is clear that these countries have at least a technological limitation that prevents them from matching their results with international measures. In this sense, technological backwardness and infrastructure constraints are valid arguments to justify not attaining the highest quality standards. These reasons, however, would only be well-founded for patients with severe comorbidities and high expected risk, where perioperative technological support is crucial to make a difference in the results. Instead, it is in very low-risk patients, with an expected lower demand for additional instrumental support, in whom local cardiac surgery should achieve the best quality standards. In this situation, there would be a strong and direct relationship between outcomes and the individual performance of the surgical team during surgery.

To date, only a few reports have analyzed the outcomes in low-risk patients, and in every case risk has been calculated based on a logistic EuroSCORE ≤ 2 [3–7]. Since this original EuroSCORE overestimates operative risk [8], we developed this study to prospectively evaluate the immediate results of cardiac surgery in patients with an expected mortality risk ≤ 2% according to the EuroSCORE II as a new gold-standard. We also examined the cause of death and whether it could be considered preventable.

A prospective risk stratification of all cardiac surgical patients treated at the Buenos Aires University Hospital of Argentina, Hospital de Clínicas “José de San Martín” and its associated Clinics, was performed between 2012 and 2014 using the EuroSCORE II. Definitions proposed by the EuroSCORE II were fully adopted and the risk score was determined with an online interactive calculator (http://www.euroscore.org/calc.html). Creatinine clearance was calculated with the Cockroft-Gault formula [9]. All types of surgery were included, except acute aortic dissection, transplant and transcatheter aortic valve implantation. Patient characteristics, surgical details and postoperative outcomes were simultaneously recorded in a computer database. Individuals with a score ≤ 2 were identified from the database and included in the study. According to our definition, they were categorized as the low-risk group. An extra category was defined when the expected risk of operative mortality was < 1, and these patients were included in the very low-risk group. Only patients with EuroSCORE II > 2 were excluded. Primary endpoints were in-hospital and 30-day all cause-mortality. Major complications, overall mortality, cause of death, observed-to-expected operative mortality ratio and observed-expected difference were calculated. Causes of death were classified by 2 senior surgeons and 2 cardiologists into 3 categories: not preventable, preventable (technical error), or preventable (system error). We defined non-preventable death when the cause was an unavoidable and unpredictable event such as pulmonary embolism, stroke, mediastinitis, septicemia or sudden death after discharge. Definitions of technical and system errors were adopted from previous FIASCO studies [3, 4].

Preoperative baseline demographic and clinical comorbid risk variables and operative procedural variables were recorded and analyzed with the approval of the institutional review board.

Between 2012 and 2014, 990 adult patients underwent cardiac surgery at our institution, 626 (63.2%) of whom were identified as having EuroSCORE II ≤ 2 (low-risk group) and 322 (32.5%) EuroSCORE II < 1 (very low-risk group). Population characteristics and the immediate postoperative adverse events in both groups are shown in Table 1. 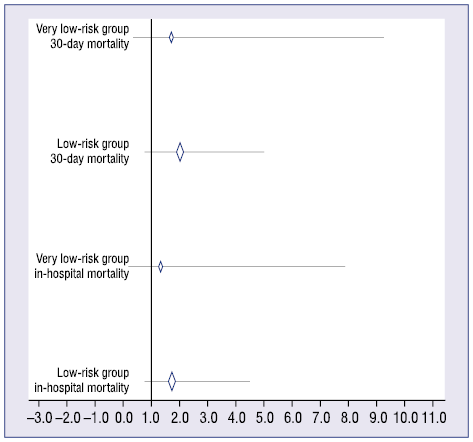 The causes of death in low-risk patients undergoing cardiac surgery are summarized in Table 2.

Table 2. Surgical procedure, cause of death, and problems identified in low-risk cardiac surgery patients, according to EuroSCORE II.

The table also identifies the problems used to classify death as preventable or not. Seven deaths out of 13 (54%) were considered preventable and related to renal failure due to excessive blood transfusion, unresolved sternal wound complication, problems with anticoagulation and antiarrhythmic treatments, delayed pacemaker implantation, technical problem with bypass grafting and systemic embolism during surgery.

Perioperative death in low-risk patients is uncommon and had not been thoroughly studied until recently [3–7]. Previous studies defined low-risk with a logistic EuroSCORE ≤ 2 or an additive EuroSCORE ≤ 3, and investigated whether death could be considered preventable due to a technical or system error. Recently, the EuroSCORE II has been introduced in order to adjust risk overestimation attributed to the original version of the score. The EuroSCORE II is an update of the original logistic EuroSCORE model and is derived from a more contemporary dataset which reflects current cardiac surgical outcomes better [2]. Based on this new score we defined a low-risk population when expected mortality risk was ≤ 2%, and a very low-risk population when risk was < 1%.

In this series, in-hospital mortality in patients with EuroSCORE II ≤ 2 was 1.8%, and 0.93% when the EuroSCORE II was < 1. Though surgical performance was adequate according to this new risk model standard, we found that there is still some room for improvement, since over half of deaths were potentially preventable. In previous studies, some unforeseen events such as stroke or mediastinitis were usually presumed to be non-preventable [6]. However, a stroke could arise from aortic debris embolism during cross-clamping or from air embolism in open heart surgery, and in these situations, the event might be considered preventable. Therefore, we assumed that classification of the causes of deaths as preventable or not might be affected by a high degree of subjectivity, and depend on identifying the actual circumstances and mechanisms leading to death.

The operative mortality rates for cardiac surgery continue to fall despite older and sicker patients, indicating better quality of in-hospital care [4]. Hence, new standards must be chosen to stratify surgical risk. EuroSCORE II is a challenging new standard, and nearly one-third of all our cardiac surgical patients were assigned as having a very low expected risk of mortality. Certainly, with this risk model, many patients with a previous logistic EuroSCORE > 2 could be reassigned to the low- or very low-risk groups, according to the EuroSCORE II.

A recent meta-analysis by Guida et al. [10], involving 145,592 patients, confirmed the global validity of EuroSCORE II as a tool to stratify patient risk. However, a single large study assessing the performance of this score in United Kingdom cardiac surgery (23,740 procedures from the Society of Cardiothoracic Surgery Database), showed poor calibration for isolated coronary artery bypass grafting surgery in both the lowest and highest risk patients [11].

Since the incidence of mortality is low, the investigation of the cause of death in very low-risk patients requires a larger group of individuals to demonstrate accurate mortality rates. In this sense, the major limitation of this work was the relatively small number of patients and deaths in the sample. Nevertheless, we determined that it is possible to achieve a good performance on low- and very low-risk patients undergoing cardiac surgery, in a context of technological constraints. Although the observed in-hospital mortality in very low-risk patients was 0.93%, the expected risk based on the EuroSCORE II was even lower (0.70), and this difference could reach statistical significance in a larger sample.

Table 3 summarizes the findings of different studies analyzing death in low-risk patients and virtually 3 of them (from United Kingdom [3, 4] and Sweden [5]) showed mortality rates well be-low 1%. The remaining 2 studies from Turkey reported similar results to ours, though they only included coronary artery bypass grafting that has a well-known lower risk of operative mortality than other types of open heart surgery [6, 7].

In conclusion, we propose to use and further validate the EuroSCORE II as a new standard for assessing low- and very low-risks patient outcomes. Even in the context of the technological constraints occurring in a developing country, this risk model proved to be useful in evaluating the quality standards of local cardiac surgery. Additionally, the review of cause of death in low-risk patients provides valuable information which may reveal potentially correctable issues, and eventually lead to improvements in the quality of care. Furthermore, the adoption of a more demanding standard, as the EuroSCORE II to identify low-risk patients, avoids the sense of safety offered by previous versions of the score.