Negative T waves (NTW) in the inferior and precordial leads is a recognized electrocardiogram (ECG) manifestation of acute pulmonary embolism (APE) [1, 2] and has been suggested as a marker of right ventricular (RV) strain (RVS) [3] or RV dysfunction (RVD) [4, 5].

There were 342 patients diagnosed with APE in our hospital from January 2008 to July 2014, including 315 patients confirmed by multidetector computed tomographic (MDCT) pulmonary angiography and 27 patients highly suspected by ventilation-perfusion scintigraphy. Using a retro-spective analysis, 210 patients with NTW were included in this study: 131 patients with and 79 patients without STDV ≥ 0.1 mV (Fig. 1). 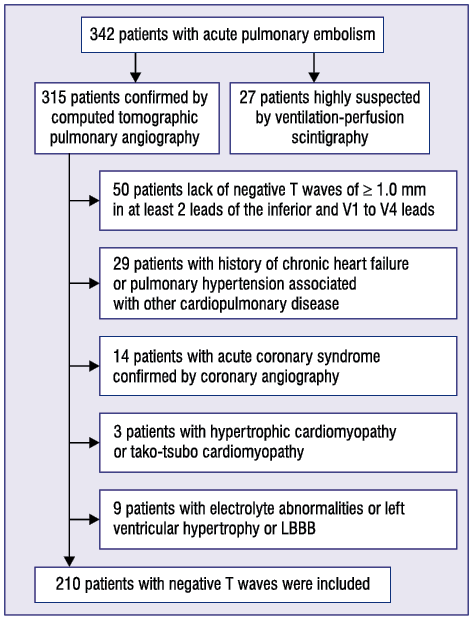 The inclusion criteria were: (i) acute onset of clinical signs and symptoms before admission suggesting APE; (ii) APE confirmed by MDCT pulmonary angiography; and (iii) admission ECG with NTW ≥ 0.1 mV in at least 2 leads out of the inferior (II, III and aVF) and V1–V4 leads.

The exclusion criteria were: (i) history of chronic heart failure or confirmed pulmonary hypertension associated with other cardiopulmonary disease (chronic obstructive pulmonary disease was not excluded if there was no confirmed history of pulmonary hypertension by echocardiogram); (ii) concomitant cardiac disease possibly causing NTW in the inferior or precordial leads, such as acute coronary syndrome, hypertrophic cardiomyopathy or tako-tsubo cardiomyopathy confirmed by coronary and/or LV angiography; (iii) ECG manifestation of complete left branch bundle block, LV hypertrophy or ventricular pacing.

The study was approved by the Shiyan Taihe Hospital bioethical committee.

After admission, an ECG using a paper speed of 25 mm/s with standardization of 1 mV/10 mm was recorded. Both ST-segment elevation (STE) and ST-segment depression (STD) were measured at the J-point in all leads and were considered present if the J-point was ≥ 0.1 mV above or below the isoelectric line. The LV subendocardial ischemic pattern was defined as STE in lead aVR with concomitant STD in leads V4/V5 to V6 (Fig. 2A). 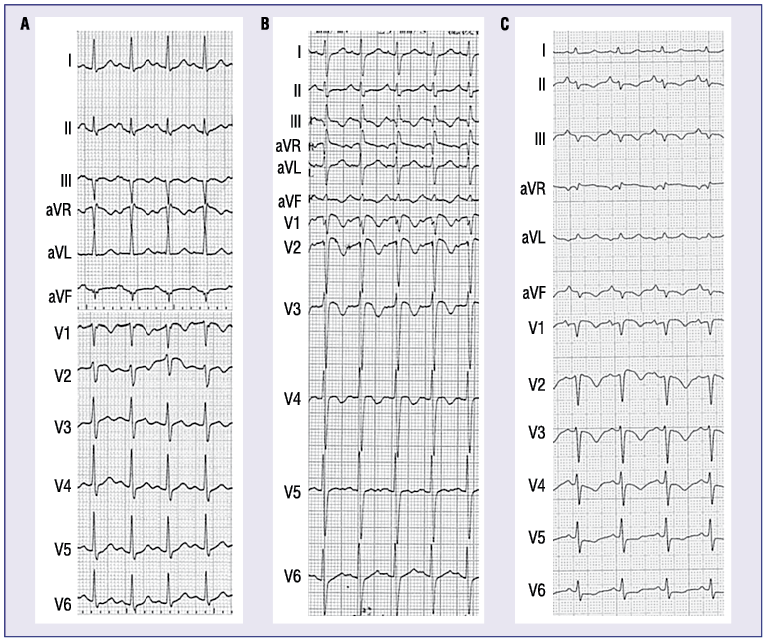 The following adverse clinical outcomes were recorded: need to intensify therapy based on the Management Strategies and Prognosis in Pulmonary Embolism Trial-3 (MAPPET-3) study criteria [10], including cardiac arrest, need for inotropic support, mechanical ventilation for respiratory support and treatment with thrombolysis or surgical embolectomy; and 30-day mortality.

All data were analyzed by SPSS 12.0. Data were expressed as mean ± standard deviation for continuous variables and rates (%) for categorical variables. The Student’s U test was used for comparison of continuous variables. Categorical variables were compared using the χ2 test or the Fisher exact test. All ECG variables were analyzed by multivariate logistic regression to identify predictors of the need to intensify therapy and 30-day mortality. Odds ratios (ORs) and 95% confidence intervals (CIs) were calculated. A 2-tailed probability value < 0.05 was considered statistically significant.

The multivariate logistic regression analysis of the ECG parameters for the prediction of 30-day mortality and the need to intensify therapy during hospitalization are listed in Table 3.

Table 3. Multivariate logistic regression analysis of electrocardiogram (ECG) parameters for the prediction of 30-day mortality and the need to intensify therapy during hospitalization.

We have described that 3 distinct ischemic ECG patterns represent different manifestations of RV and LV transmural and subendocardial ischemia [9]. According to our results, these ECG patterns are frequent (89%) in APE patients with STDV and NTW. The mechanism of the ischemic patters has been attributed to hypotension, hypoxemia, pulmonary artery hypertension, and catecholamine surge [9, 14].

In this study, we have demonstrated that STDV with concomitant NTW had worse evolution compared to NTW without STDV. Patients with STDV had a higher incidence of dyspnea on exertion or on rest, hypotension, cardiogenic shock, need to intensify the therapy, and higher 30-day mortality compared to patients without STDV. The 3 distinct ischemic ECG patterns could be used to identify patients at higher risk of worse clinical adverse outcomes. To our knowledge, we are the first to demonstrate that the relatively normal ECGs (no STDV, absence of notched S wave or RBBB or QR sign in lead V1 and S1Q3T3) are associated with favorable clinical outcomes. It should be pointed out that the relatively normal ECG still present with NTW ≥ 0.1 mV in at least 2 leads out of the inferior (II, III and aVF) and V1–V4 leads.

NTW in the inferior and precordial leads has been suggested as a marker of RVS [3] or RVD [4, 5]. However, another study [17] suggested that an increase in the amplitude of NTW in the precordial leads after thrombolytic therapy reflects an improvement in cardiopulmonary hemodynamics with concomitant decrease of both RV diameter and mean pulmonary artery pressure. We previously described the dynamic ECG changes in 2 patients and found that NTW developed later than STE and that the NTW persisted beyond recovery of RVD [14]. In another study [9], none of the 8 patients with acquired APE during hospitalization presented with NTW in precordial leads during hypotension or cardiogenic shock; additionally, all 8 patients showed STE and/or STD. Hence, NTW in the inferior and precordial leads without STDV might represent a “post-ischemic” ECG stage, thus reflecting a previous, transient, stage of RV stretch and ischemia [9, 14]. We also speculate that more leads with NTW reflect more extensive prior ischemia. Hence, there is a conflicting relationship between NTW and RVD or the severity of the APE in the literature. Association of NTW and RVD or the severity of the APE can be found in patients with STDV [14] and in patients who were not treated for APE [3, 5]. More leads with NTW are also related to worse short-term prognosis [18, 19]. However, there is a poor relationship in patients after effective treatment where the RVD has possibly been recovered [14, 17].

Our study has several limitations. It is a retrospective single center study. Different departments and different physicians may have variable criteria with regards to need to intensify therapy. There are many factors influencing STDV and we could not rule out all the confounding factors such as concomitant coronary artery disease or paradoxical coronary embolism.

Ischemic ECG patterns are common ECG manifestations of APE. They are clinically important as they could predict adverse clinical outcomes. Prompt recognition of these patterns may help in avoiding inaccurate diagnosis leading to unnecessary medical investigations and treatments and may aid in detecting high-risk patients with APE. Relatively normal ECGs may associate with favorable clinical outcomes.

Conflict of interests: None declared