Sexual dimorphism in socioeconomic differences regarding the risk factors, symptomatology and management of patients with stable coronary artery disease in Poland

Coronary artery disease (CAD) is described as one of the major causes of death worldwide [1, 2]. In the Polish population, CAD is estimated to affect over 1 million of individuals, and in 2012 led to 45,850 deceases [3]. The population of patients with CAD is heterogeneous in many aspects, including the socioeconomic status (SES) [4]. SES has been found to be associated with the risk of CAD, its prevalence and treatment, as well as late outcomes in patients after myocardial infarction (MI) in the Unites States and Western European countries [5–11]. However, there is no analogous evidence for Poland. It is not obvious if such associations are present in Eastern European countries due to economic, education and healthcare differences. Although several cardiovascular risk factors, such as hypertension, abdominal obesity, hyperglycemia were found to be more prevalent in low educated Polish women [12, 13] and higher cardiovascular mortality was shown in low educated citizens of Warsaw and Tarnobrzeg [14]. Nevertheless, the aforementioned studies were limited to the analysis of few factors in the selected local communities, so it is not possible to assign these results to the whole Polish population.

Gender is a risk factor of CAD itself. Further, there is a clear sexual dimorphism seen in European population regarding epidemiology, symptomatology, treatment and outcomes of CAD [15–17]. There are also well known gender differences in SES gradients regarding the prevalence of hypertension and metabolic syndrome in Poland [12, 13], hence it is justified to analyze men and women separately.

SES is conditioned by a broad range of factors, among which the most significant are: education, occupation and income. Education level, due to its high correlation with the two others, constitutes the most commonly used SES measure in epidemiological studies [18], also in those regarding CAD [9, 18, 19]. Moreover, education among other SES measurements was found to be the strongest and most consistent determinant of CAD risk factors prevalence in Poland [20] as well as MI occurrence in another Eastern European country — Czech Republic [21], and was also applied in our analysis.

In the present study, we investigated, considering gender stratification, the association between SES and cardiovascular risk factors, symptoms and applied treatment in the large representative population of Polish stable CAD patients, participating in the RECENT study [4].

The selection of the participating physicians, the enrolment of patients and the data collection protocol of the RECENT study were described accurately elsewhere [4].

The representative group of 2,593 patients (1,466 men and 1,127 women) was enrolled by the previously chosen ambulatory care physicians (general practitioners and specialists) in Poland. All healthcare professionals were obliged to enrol, within 14 days of recruitment period, up to 10 consecutive patients with confirmed CAD that had been treated for at least 12 months. Out of this group, 22 subjects were excluded from the analysis due to the lack of the data regarding educational status which was crucial for the study. Detailed recruitment scheme and criteria were described elsewhere [4].

Forms were filled in anonymously by physicians on each participant of the study. Detailed information about the questionnaire content was presented elsewhere [4, 22].

The data on SES, physical examination and medical history were obtained from the study questionnaire. Regarding the reported level of educational attainment, patients were divided into three groups:

We analyzed the following variables categorized into four groups:

Generally, SES gradients regarding the prevalence of cardiovascular risk factors were markedly seen in women. Women with primary education were older than in SEG and HEG. Almost all measured quantitative risk factors, such as BMI, SBP, DBP were the higher the lower the level of education was. A trend in greater prevalence of hypertension in PEG, than in SEG and HEG was also found, however, the difference did not reach the level of statistical significance (p = 0.05). In contrast to the aforementioned risk factors, dyslipidemia was diagnosed the more frequent, the higher the SES (Table 1).

In males, higher level of educational attainment was associated with lower LDL-C levels (Table 1). This was not observed in women.

There were no SES differences in the prevalence of diabetes in both sexes (Table 1).

SES gradient was seen only in the prevalence of heart failure and only in women. There were no SES differences in an incidence of peripheral artery disease, stroke/TIA or MI (Table 1).

There were SES gradients regarding the angina symptom control in both genders when assessed using CCS class (Fig. 1) and the number of used nitroglycerin doses over the week preceding the study (Fig. 2B). Both measures showed that the lower the level of education, the more exaggerated the symptoms. 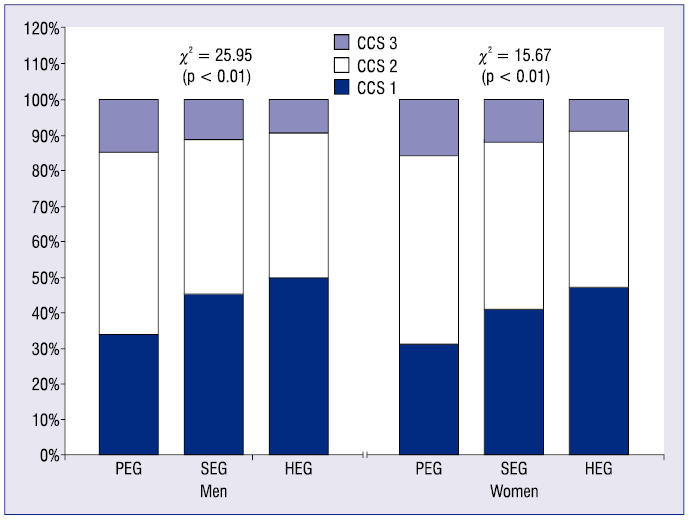 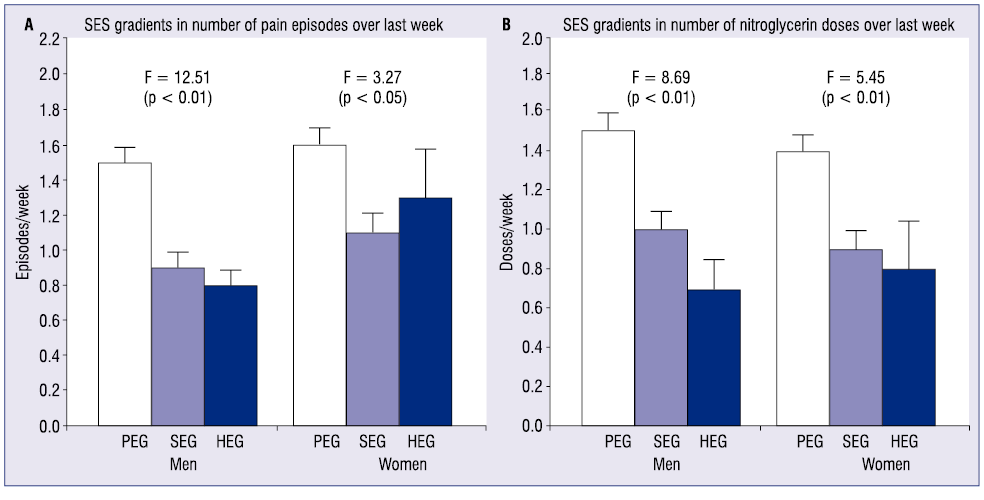 The number of chest pain episodes over the week preceding the study was significantly higher in PEG in comparison to SEG and HEG in both genders (Fig. 2A).

There were no statistically significant SES differences within PCI and CABG appliance, however the trend toward more frequent CABG in HEG was observed in men (p = 0.05) (Table 2).

Table 2. Socioeconomic gradients in the treatment of coronary artery disease in Polish man and women with stable angina.

Regarding pharmacotherapy, SES gradients in both men and women were found only in the use of statins, whose frequency of prescription depended on the quality of SES.

No other SES gradients were found among the analyzed medications (Table 2).

Our analysis of the stable CAD population of the RECENT study revealed that: (1) SES gradients within the cardiovascular risk factors are seen mainly in women, (2) the higher the level of SES, the better the symptom control in both genders, and (3) despite the differences in the symptom control, there are only few SES gradients within applied treatment of CAD, regarding statin use in both genders, as well as antiplatelet and LAN use in women.

The results of our analysis are quite concordant with the results of Mayer’s et al. [9] study of the European, multi-country, CAD population, where inverse relationships between SES, and the CAD risk factors, and applied pharmacological treatment were found. However, some SES gradients differ in Poland, which may be the result of trends seen in the general Polish population.

To begin with, in our analysis, SES gradients regarding the prevalence of CAD risk factors are much more frequent in women than in men. Thus, on the contrary to the European population [9], in Poland, SES gradients in mean DBP and SBP are found in women instead of men. This finding is in accordance with trends seen in the general Polish population, where low level of education was reported to be associated with higher risk of hypertension in women but not in men [12]. Furthermore, the relationship between low education level and BMI, in our analysis, is present only in women, when EUROASPIRE II sub-study showed such a regularity for both sexes. Tobacco consumption is reported to be inversely related to the level of education in European CAD populations [9, 11]. In contrast to these data, we found a straight relationship between SES and smoking in women — smoking rate is the highest in HEG group. This difference may be a result of changes seen in Eastern European societies since early 1990s, where apart from transient increase in premature mortality of working-age men (mainly due to CAD) and changes in drinking habits, the increase in tobacco consumption in women was observed [23, 24].

To the best of our knowledge, our study provides for the first time the association between angina control and SES. Apart from CCS class we used the number of used nitroglycerin doses and the number of chest pain episodes experienced in the week preceding the study as well as the occurrence of the typical chest pain over 3 months preceding the study to determine the severity of symptoms. According to the results of our analysis, clear SES gradients in the occurrence of CAD symptoms are seen in all used measurements, in both genders. This finding is difficult to explain simply with the differences in applied treatment. No SES gradient within invasive treatment reaches the level of statistical significance, use of LAN is also the lowest in HEG. Nevertheless, our results may help understand the data presented by Cohen et al. [25], who revealed, using treadmill exercise test, lower functional capacity in low educated CAD population.

The adherence to CAD life-saving medications in Poland is independent of the level of education with two exceptions. Statins, same as it was found by Mayer et al. [9] in the population of 15 European countries, are more frequently administered in HEG individuals of both genders, which reflects in lower LDL-C levels in that group (difference significant only in men). Antiplatelets are less frequently used by women in SEG. This finding cannot be explained by lower appliance of PCI in that group or higher rates of atrial fibrillation (data not presented) whose treatment may influence antiplatelet therapy, and needs to be explained in future studies. Among symptomatic drugs, probably as a result of more exaggerated symptoms, the usage of long-lasting nitrates is the higher the lower SES is, however this gradient is statistically significant only in women.

The strongest side of our analysis is the unique sample drawing scheme, which allowed us to analyze a representative group of stable CAD patients, treated in primary care settings and outpatients clinics across Poland. Hence, the results of the analysis describe everyday real-live patients. Majority of studies concerning CAD population cited here were recruiting patients after hospitalization due to acute coronary syndrome or after invasive coronary revascularization [9, 11]. Hospital stay due to acute coronary syndrome improves further drug prescriptions, compliance and adherence itself [26–28], same invasive treatment increases use of antiplatelets and reduces symptomatic drugs use due to the procedure itself.

There are also several limitations to the study. First of all, it was a questionnaire based study, so the questionnaire bias cannot be excluded. However, the questionnaires were filled by physicians based on patients’ medical history, which reduced potential misunderstanding of questions and provided an opportunity to ask participants additional questions if the response was inaccurate. Secondly, the level of education was the only factor used to determine SES. Nevertheless, the factor is the most consistent and the strongest determinant of health, and is most commonly used in epidemiological studies [18].

Our analysis revealed that SES differentiates Polish population of patients with stable CAD. High education, independently of gender, is associated with better symptom control and higher appliance of statins. Sexual dimorphism is particularly well seen in SES gradients regarding the CAD risk factors — risk profile of low educated women is worse than of low educated men. Sexual differences are also present in the use of LAN.

The results of our study would be important and help understand the effect of SES on health of our patients and identify groups (e.g. low educated women) which need intensified medical attention in terms of preventive lifestyle changes and compliance with evidence-based pharmacotherapy.

Conflict of interests: P. Ponikowski, W. Banasiak, and E.A. Jankowska are consultants and members of the speaker’s bureau of Servier. R. Pociupany, A. Wilkins are Servier employees. Servier provided financial support for the RECENT study execution and supervision of the database. The analysis of presented data was performed by authors themselves.