Insulin resistance (IR) plays a role in pathogenesis of metabolic syndrome and diabetes mellitus [1]. For evaluation of IR in larger clinical studies, the Homeostatic Model Assessment (HOMA) index is commonly used [2]. Previously, IR measured in patients with coronary artery disease was associated with increased risk for coronary events and predicted mortality independently from diabetes mellitus [3, 4]. IR increased in-hospital mortality after acute coronary event [5, 6]. The aim of the current study was to evaluate whether HOMA adds predictive value in the population after myocardial infarction (MI) in long-term follow-up and in a large study group. Identifying patients with IR with relation to their body mass index (BMI) may allow better risk stratification and initiation of aggressive risk factor modification after MI when lifestyle changes are more likely to be implemented [7].

This investigation is a sub-study of the Thrombogenic Factors and Recurrent Coronary Events (THROMBO) study. Detailed protocol and inclusion criteria have been previously described [8]. THROMBO was a multicenter study examining the effect of lipids and thrombogenic factors on recurrent coronary events, nonfatal MI or cardiac death during a 26-month follow-up in patients with index MI. Between October 1 1994 and June 30 1997 1,045 patients were enrolled and signed the consent for participation in a 2-month post-infarction (baseline) visit. Glucose and insulin measurements were available for 1,032 of 1,045 patients (98.7%) and constituted the study population of this report.

The endpoint was defined as death due to coronary heart disease, recurrent nonfatal MI or unstable angina episode, whichever occurred first. Unstable angina definition included hospitalization during follow-up with an increase in either frequen-cy or duration of angina symptoms, or development of new angina at rest — whichever occurred first with both requiring ischemic electrocardiogram (ECG) changes without enzyme elevation. A 2-member committee reviewed information on the endpoint events from appropriate medical records.

The effects of the HOMA2-IR by quartile on time to endpoint were examined graphically by the Kaplan-Meier method, and the log-rank statistic was used when comparing the difference in survival between each pair of curves. Nineteen patients who died of causes other than coronary heart disease were censored at the time of their death. The multivariate Cox proportional hazards regression analysis was performed with the Cox proportional regression hazards model (SAS PHREG computer program). The regression model was adjusted for factors that play a role in recurrent coronary events. To identify important clinical factors we included in the model previously pre-selected factors (age, sex, race, prior MI, prior stroke, history of diabetes mellitus, index infarct type by ECG [Q-wave vs. non–Q-wave], thrombolytic therapy, pulmonary congestion by chest roentgenogram, and ejection fraction during the index coronary event, and smoking status at enrollment) [8], and additionally we included factor identified by Grace study (hypertension, coronary artery bypass grafting [CABG] and percutaneous transluminal coronary angioplasty [PTCA]) [9]. A significance level of p = 0.05 was used for entering a variable into the basic clinical model. The following parameters enter clinical model: age, male, sex, diabetes mellitus, prior MI, pulmonary congestion on chest roentgenogram, PTCA and CABG. All probability values were 2-tailed, and p < 0.05 was considered significant.

A total of 1,032 patients were analyzed. The clinical characteristics of the entire study population and patients by HOMA2-IR status are presented in Table 1. Patients with high HOMA2-IR were more likely to be younger and less likely to be white, male, obese, male and with history of hypertension and diabetes. They were often treated with diuretics and angiotensin converting enzyme inhibitors. Patients categorized as having higher HOMA2-IR had higher BMI, fibrinogen, PAI-1, von Willebrand factor, apo-B, triglyceride and CRP.

During a mean follow-up of 1.7 ± 0.89 years, the combined primary endpoint was met in 199 su­-bjects including: 127 patients with unstable angina, 52 patients with MI and 20 patients with cardiac death. 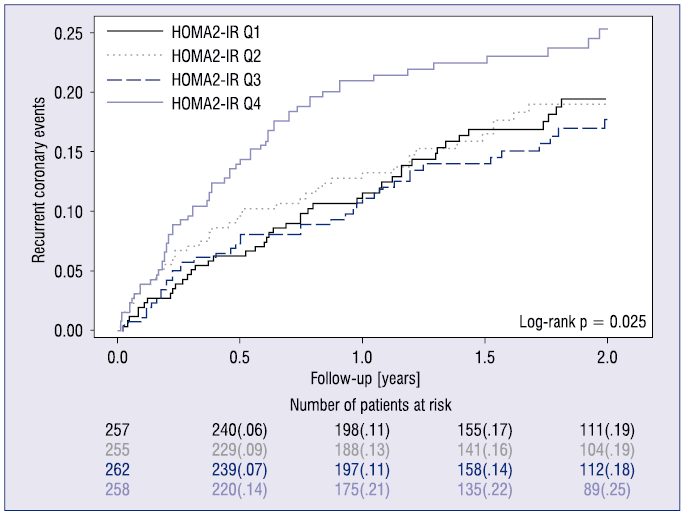 In the multivariate models after adjustment for age, gender, diabetes, prior MI, pulmonary congestion on chest roentgenogram, PTCA and CABG patients with Q4: HOMA2-IR were at higher risk for recurrent coronary events (hazard ratio [HR] 1.44; confidence interval [CI] 1.03–2.01; p = 0.03) compared to patients in the lower 3 quartiles (Table 2). When HOMA2-IR was analyzed separately for cardiac death, MI and unstable angina, only unstable angina was predicted with statistical significance (Table 2).

Table 2. The contribution of Homeostatic Model Assessment 2 for Insulin Resistance (HOMA2-IR) (Q4:Q1-3) to the risk of experiencing a recurrent cardiac event for patients in the top quartile (Q4 ≥ 2.4) compared to patients in the lower 3 quartiles.

To examine whether the association between HOMA2-IR and clinical outcome was driven by a concurrent diagnosis of diabetes, we additionally analyzed interaction between diabetes status and HOMA2-IR that was not statistically different (interaction p = 0.07). 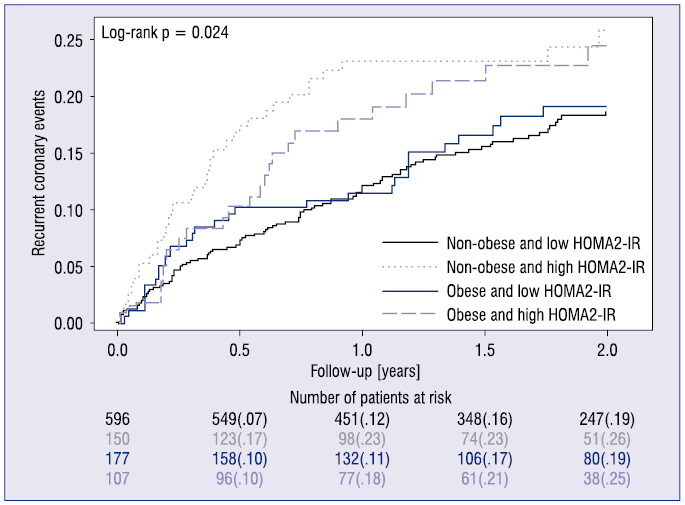 In primary risk stratification, IR predicts development of cardiovascular disease independently of diabetes mellitus [10–12]. In acute hospital setting, IR is associated with increased mortality after acute coronary event [5, 6]. In our multicenter prospective study, IR predicts recurrence of coronary events in post-infarction population. Analysis of specific components suggested that the main effect was related to prediction of unstable angina. Our study is consistent with previous observations, furthermore emphases significance of IR in development of acute cardiac events in population at high cardiovascular risk. Importantly, IR was associated with adverse prognosis after adjustment for important clinical factors including diabetes mellitus.

IR was measured 2 months after MI and therefore it is less likely to be associated with adrenergic surge as a part of the acute stress responses, but rather a representation of metabolic disturbances. It has been postulated that IR in the post-myocardial period may predispose patients to micro vascular, myocardial injury and larger infract size [13]. Emerging evidence supports direct pro atherogenic effect of IR [14, 15], as well as its direct adverse effect on myocardial contractility [16].

An adipocentric view of the metabolic disturbances considers obesity the major clinical component for IR in peripheral metabolic tissues. However, the link between obesity and IR is complex, as indicated by the fact that some extremely obese people are glucose tolerant, while others with a mild degree of obesity develop severe IR and diabetes. In our study, patients identified as non-obese with IR had a higher risk for recurrent coronary events. Although obesity is an independent predictor of clinical coronary disease in the Framingham study [17], the association becomes weaker after adjustment for hypertension, hypercholesterolemia: features classically associated with obesity [18]. Noteworthy among people with established coronary artery disease is the fact that BMI is inversely associated with mortality, phenomenon known as “obesity paradox” in review [19]. It has been previously suggested that perhaps BMI is not a good parameter to explain the complex association of obesity and cardiovascular disease. Other parameters like visceral adiposity, body composition, waist circumference, body fat and free fat mass have a role in clinical practice [20]. Our study showed that HOMA2-IR is a better prognostic factor than BMI in predicting risk for recurrent coronary events suggesting that intracellular lipid accumulation in ectopic tissue triggers pathological responses with subsequent impairment in insulin signaling in review [21].

Our findings indicate that IR is a good clinical marker of increased risk and improving insulin sensitivity may modify cardiovascular risk. HOMA2-IR is better than BMI in stratifying the risk of recurrent coronary events. Multilevel intervention to increase insulin sensitivity in people after MI may influence the clinical outcome.

This study was supported by research grant HL-48259 and HL-30616 from the National Institute of Health, Bethesda, MD. We would like to thank Patricia Severski from Heart Research Follow up Program for her assistance in data management and data analysis for THROMBO study and for this manuscript.