Current cardiac guidelines support cardiac resynchronization therapy (CRT) for symptomatic heart failure (HF) patients (New York Heart Association functional [NYHA] class III or IV) on optimal pharmacologic therapy, QRS ≥ 120 ms and left ventricular ejection fraction (LVEF) ≤ 35% [1]. CRT may be considered in patients with class II HF, and even class I with QRS > 150 ms according to the 2013 ACCF/AHA guidelines for the management of HF [2]. CRT improves symptoms, functional status, ventricular size and function, hospitalization rate and mortality in patients with advanced HF [3]. However, approximately 25–30% of patients who meet standard criteria for CRT fails to derive substantial benefits [4]. Left ventricular (LV) lead placement in a suitable cardiac vein branch along the dyssynchronous wall of the LV is an important determinant of responsiveness to CRT [5]. As most of those patients have cardiomegaly, the coronary sinus (CS) is larger and its anatomic location may be displaced. Implanting the electrode in a cardiac vein can be difficult in as many as 20% of patients, a consequence of unfavorable anatomic factors. In such patients, accurate anatomic depiction of the vessels can be crucial to the success of LV pacing [6]. Retrograde venography (RV) via CS is currently the standard technique for defining CS anatomy [5]. Ideally, venous anatomy should be assessed noninvasively before implantation to determine whether a transvenous approach is feasible [7]. Cardiac computed tomography (CT) has been increasingly used to assess the anatomy of cardiac vessels, including the cardiac venous system (CVS) [7]. The feasibility of multidetector cardiac tomography (MDCT) to visualize the venous anatomy has been demonstrated [7–11]. It has the advantage of showing the entire CS and the origin of the inferior interventricular vein (IIV), which is obscured by the balloon in RV. With MDCT, there is no foreshortening or vessel overlap. It has also been demonstrated that MDCT properly depicts variants of normal anatomy and small branches [6].

The objective of the present study was to evaluate the accuracy of 320 detectors CT scan to depict cardiac veins and right atrium (RA) anatomy before CRT.

This was a single center retrospective study. The study conforms to the principles of Helsinki declaration and was approved by the hospital’s Ethics Committee. Given the retrospective character of this study, the ethics committee waived the necessity for informed consent. All authors have read and agreed to the manuscript as written.

A cohort of consecutive patients referred to CRT from January to November 2012 was studied. All patients were under optimal medical treatment, with NYHA class III or IV symptoms, LVEF ≤ 35% and QRS ≥ 120 ms. A creatinine clearance ≤ 30 mL/min, allergy to iodinated contrasts, resting heart rate > 100 bpm were considered as contra-indications for performing the MDCT study and those patients were excluded from the study. The population was divided into two groups regarding ischemic (IS) or non-ischemic (NIS) cardiomyopathy to allow a sub-analysis.

Scan protocol. Images were taken with a Toshiba Aquilion 320 detector Tomographer (Toshiba Medical Systems, Otawara, Japan) less than 30 days before the CRT. Scanning coverage was from the level of the carina to the bottom of the heart. One hundred milliliters of iodine contrast (VisipaqueR) were administered at 5 mL/s, followed by a 50 mL saline flush. The acquisition was performed when the peak density reached 200 HU in the descending aorta and was prospectively synchronized with the electrocardiogram (ECG) to lower radiation exposure. Scanning was done with collimation: 0.5 mm, tube rotation time: 400 ms, tube voltage: from 100 to 135 kV and 300 to 510 mAs, according to the patient´s body mass index.

Qualitative and quantitative evaluation of MDCT data. Images were evaluated by 2 physicians experienced in cardiac imaging (MPR 5y, GG 12y). The following CS tributaries: IIV, posterior vein (PV) of the LV and left marginal vein (LMV) were identified on volume rendered reformations. Multiplanar reformatting in 3 orthogonal planes was used to measure antero-posterior and supero-inferior CS ostium diameters (where CS makes an angle with the RA in the crux cordis area). The RA area and the distance between CS ostium and RA lateral wall were also measured.

Venography protocol. Following the CS cannulation, a retrograde angiography was performed using a balloon occlusion catheter and hand injection of contrast. If any veins demonstrated on the MDCT were not encountered on venography, the procedure was repeated moving the catheter up-stream and down-stream to find all veins. Fluoroscopic acquisition was continued several seconds after the end of contrast injection to allow retrograde filling of branches occluded by the balloon via collateral flow. Two orthogonal views (right anterior oblique [RAO] 30–45° and left anterior oblique [LAO] 30–45°) were performed for a better visualization of the venous tree and appropriate targeting of the LV lead.

Qualitative data in retrograde venography. Venographies were retrospectively reviewed by 2 electrophysiologists to determine the presence of CS tributaries: IIV, PV and LMV.

Each categorical variable is expressed as a percentage. The corresponding number of patients is indicated. Variables are presented as medians with respective inter-quartile ranges (IQR). SPSS 16.0 (Chicago, Illinois, USA) was used for statistical analysis. The sensitivity of MDCT for depicting CS tributaries was determined in comparison to RV. A p value < 0.05 was considered statistically significant. Inter-observer agreement was calculated using the intra-class coefficient.

A total of 41 patients were included. MDCT was successfully performed in those patients. RV was not obtained in 2 patients, because of a giant RA, too dilated to properly cannulate the CS in 1 case and because of a right subclavian vein occlusion in the other case.

The median of the distance between CS ostium and RA lateral wall was 49 mm, (IQR 44.3–58.2 mm) and other atrial measures are summarized at Table 3. A statistically significant positive correlation (r = 0.749; p < 0.001) between echocardiographic RA area and the distance from CS ostium to the RA lateral wall in the MDCT, was observed.

Comparison between MDCT and RV

The capability of MDCT for depicting the presence of CS tributaries was systematically compared to RV in 39 patients (Fig. 2). Figure 2. Image of lateral vein in multidetector cardiac tomography 3-dimensional volume renders reconstruction (A) and the same artery in right ventricular projection (B).

Comparison of MDCT and echocardiography 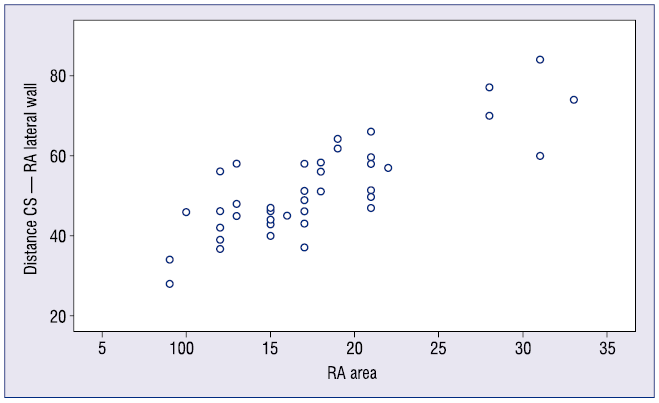 CRT is one of the most successful HF therapies that emerged in the last 25 years and is applicable to almost 25–30% of patients with symptomatic HF. Since the initial approval of the therapy over 10 years ago, there have been hundreds of thousands of procedures worldwide. Historically, significant attention has been paid to the technical aspects of the implant procedure, particularly regarding the placement of the LV lead. Placement of the transvenous epicardial LV lead is critical to achieving cardiac resynchronization and to garnering the dramatic improvement in symptoms, quality of life, LV function, hospitalization and mortality rates in patients with systolic dysfunction, QRS delay, and HF [12].

The optimal site for LV lead implantation may vary, depending on the region and/or extent of dyssynchrony. CVS anatomy is very variable and there may not always be a suitable vein that can accommodate a pacing lead with acceptable pacing parameters [13].

Cardiac veins have a macroscopic disposition different from that of the coronary arteries and show many more variations [6].

The CS has become a clinically important structure especially by providing access for different cardiac procedures. Cannulation of the CS may be complicated by obstruction due to Thebesian valve [16, 17].

Until recently, exploring the CVS necessitated an invasive approach using RV, either by manual contrast injection or after occlusion of the CS [7, 10, 18, 19].

In most patients, CVS anatomy using RV is properly depicted and venous accessibility determined. Reported disadvantages of this method are incomplete venous system visualization, a difficult CS ostium cannulation, an excessive use of contrast material (up to 500 mL in 1 study) and balloon related trauma to the CS [10, 11, 20].

Cardiac magnetic resonance (CMR) and MDCT scan are increasingly used to assess the anatomy of cardiac vessels, including cardiac veins. However, CMR cannot be used in patients with pacemakers or intracardiac defibrillators (encountered in 53.1% and 31.7%, respectively in our study), and is less reliable than MDCT to depict cardiac vessel anatomy [8, 10, 21].

Since the beginning of the 21st century, many studies using MDCT have reported it as an easy, reliable and safe way to depict cardiac veins [7, 9–11, 22–25].

It has been demonstrated that 64 slices MDCT is a user-friendly and effective non-invasive method for visualizing cardiac veins before CRT [26, 27]. It can be used as a guide map for CRT [10].

In our study, we used 320 detectors MDCT to depict the CVS anatomy and to study the RA. Our study confirmed that the CS is an oval shaped structure, with a larger supero-inferior diameter, that requires a description in more than one dimension to know its real shape [7, 9].

We also demonstrated that there is a good correlation between echocardiography and MDCT for measuring the RA area and CS to RA lateral wall distance. There is also a good inter-observer agreement for RA and CS measurements. These findings may help the electrophysiologist to choose the appropriate catheter for cannulating the CS. Moreover, it may also demonstrate much dilated RA, indicating a potentially difficult procedure using standard tools.

Our study showed that the CS and IIV are always present on MDCT [7, 9, 10]. In comparison to RV, MDCT has an excellent sensitivity to determine the presence of PV and LMV before CRT.

According to the IS and NIS sub-group analyses, no significant difference was demonstrated for the presence of PV or LMV regarding the IS or NIS status of the patient. Nevertheless, there was a tendency for the IS patients to present less LMV than NIS and our study may lack of power to appropriately confirm this finding. This would be in accordance with of the study of Van de Veire et al. [7], who concluded that patients with a history of infarction were less likely to have a LMV.

Finally, the recent EHRA/HRS consensus for CRT suggests, based in preliminary data, that knowledge of the CVS using MDCT could facilitate CRT though decreased procedure time and utilization of guiding catheters [12].

This is a retrospective study with a small sample size, therefore we consider it a very interesting study but it may have lacked power to confirm this finding and further investigations are necessary. This protocol did not include a follow-up of creatinine, renal failure or contrast nephropathy.

MDCT is as accurate as RV to depict CS and its tributaries (IIV, PV, LMV), and it could be useful as a non-invasive technique before CRT.