Perceived control as a predictor of cardiovascular disease mortality in Poland. The HAPIEE study

Cardiovascular disease (CVD) mortality started to decrease in Poland over 20 years ago but the diseases of circulatory system still remain the main cause of deaths [1]. Causes of the changes in the CVD mortality are not fully explained [2]. Introduction of reperfusion treatment, preventive pharmacotherapy and modification in the main risk factors such as hypertension, hypercholesterolemia or smoking contributed to the decreasing trend in CVD mortality. However, it seems unlikely that they were the triggering factors for the reversal of the trend at the beginning of the 1990s. Recent estimates made in the IMPACT Poland project showed that about 10% of the factors affecting the reduction in mortality due to ischemic heart disease remain unknown [3]. Also, the causes of the favorable spontaneous changes in the exposure to main CVD risk factors remain unclear. One of the hypotheses is that they were a result of macroeconomic changes and psychosocial factors. This is supported by the coincidence of CVD mortality decline during the political transition in Poland [4]. The mechanism of relationship between psychosocial factors and CVD is still the subject of research. The postulated mechanism indicate metabolic changes as a result of neuroendocrine response, imbalances of the sympathetic and parasympathetic nervous system, occurrence of metabolic syndrome or immunological response to inflammation [5–8]. The importance of psychosocial stress in development of CVD was established [8, 9].

In Central and East Europe, where for a long time socio-economic environment differed from Western Europe, no cohort studies to investigate the relationship between perceived control and CVD mortality have been carried-out. Numerous authors highlight the need for research to investigate causal relationships between psychosocial factors and CVD mortality in this region [20–23].

The sample of 19,865 men and women was randomly selected from permanent residents of Krakow, who on December 31, 2002 were at age between 45 and 69 years. The drawing was conducted in the gender groups, 5-year age strata and in the 4 main districts of Krakow, assuming an equal representation of population in each stratum.

Total and cause specific mortality follow-ups were performed. The study was carried out within the Polish part of the HAPIEE project (Health, Alcohol and Psychosocial factors In Eastern Europe). The rationale of the study and methodology of the project were presented in detail previously [24, 25]. Brief information relevant for this publication is given below.

All participants gave written consent for participation in the study. The study was approved by the Bioethical Committee at the Jagiellonian University Collegium Medicum.

Perceived control was assessed using a scale adapted from WHITEHALL II Study, the MacArthur Foundation Midlife Development Program and The New Barometer Studies [20, 23, 24, 26]. Respondents were asked to identify the extent to which they agree or disagree with presented statements in a 6-point scale (from totally agree — code 0 to totally disagree — code 5). The final score was defined for respondents who answered at least 9 out of 11 questions. In persons who gave only 9 or 10 responses, missing values were replaced by the arithmetic mean of the others. The final result ranged from 0 (perceived lack of control) to 55 (the highest perceived control). The studied group was divided into 4 subgroups using sex-specific quartile values.

Height and weight were measured in the vertical position using electronic scales with a built-in ruler in participants wearing light indoor clothing and no shoes. Body mass index (BMI) was calculated in kg/m2. Obesity was defined as BMI ≥ 30 kg/m2. Blood pressure was measured after at least 5-min rest, in a sitting position, on the right arm using the automatic device Omron M5-I, 3 times in 2-min intervals. The average of the last 2 measurements was used in the analysis. Hypertension was defined as blood pressure ≥ 140/90 mm Hg or receiving hypotensive treatment.

Blood was collected by venipuncture, from the respondents in the fasting state (after at least 12 h after the last meal), in the sitting position. Time of tourniquet use was limited to < 1 min. Biochemical analyses were conducted on the same day, less than 4 h after the time of collection. Prior to centrifugation, samples were stored at 4oC. Hypercholesterolemia was defined as total cholesterol ≥ 5 mmol/L or low density lipoprotein cholesterol ≥ 3 mmol/L or receiving lipid-lowering treatment. Diabetes was defined as having fasting plasma glucose ≥ 7 mmol/L or having diabetes diagnosed by the doctor.

Low physical activity was recognized if total duration of physical activity was shorter than 25 h in a typical week. Current smoking status was defined in persons smoking cigarettes regularly or occasionally and ex-smoking if they had smoked in the past but stopped. The remaining participants were classified as non-smokers. The number of chronic diseases was assessed according to the answer to the question, in which respondents selected from a given list of diseases those, which were diagnosed in them by a doctor (with or without hospitalization). History of CVD was coded as a dichotomous variable.

Follow-up was carried out until for all participants at least a 5-year observation was reached. Deaths from all causes were registered. Information on deaths was obtained from the Local Register of residents of the City of Krakow. Causes of deaths, according to the International Statistical Classification of Diseases and Related Health Problems — Review X (ICD-10), were obtained from families and Central Statistical Office. CVD deaths were defined as ICD codes I.00-I.99.

There were 10,728 men and women examined in baseline examination (response rate 61%). Out of them 185 (1.7%) had not data on perceived control available and a total number of 10,543 individuals were included to a cross-sectional analysis. Further 688 (7%) did not agree for follow-up, and finally 4,789 men and 5,066 women were considered to the prospective study. 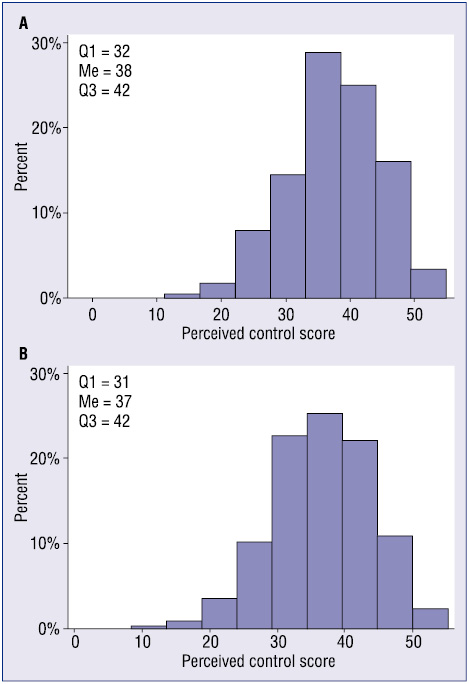 Figure 1. Distribution of perceived control; A. Men; B. Women

Kaplan-Meier survival curves by perceived control for all-cause and CVD mortality for men and women were presented in Figure 2. The relationship between perceived control and all-cause mortality was weaker than in the case of CVD mortality (Table 4).

There are some limitations in the interpretation of the results presented. The Polish version of perceived control scale was published in 2002 [24] but its external consistency was not fully assessed, because there was no other Polish tool for the assessment of perceived control in the general population. However, this tool is widely used for the assessment of perceived control in large epidemiological studies [15–17, 20, 21, 23, 27] and its internal consistency was satisfying [28]. Although the study group was drawn from the general population, nearly 39% of individuals did not participate in the baseline examination. This could have a negative impact on the representativeness of the sample. Such a participation rate, however, is not considerably different from response rates obtained in studies in this age group [29, 30]. Comparison of mortality among respondents and non-respondents of the Polish part of the HAPIEE project showed that respondents were the healthier part of the general population [31]. Thus, the relationship between perceived control and mortality in the population of Krakow might be even stronger than our results showed.

Despite involving more than 10,000 of participants, statistical power was too low to demonstrate a significant effect of perceived control on all-cause mortality. There is some evidence from several studies on inverse relationship between perceived control and mortality from all causes [34, 35]. The effect described by other authors was not supported by our results. After adjustment for age, education, marital status, chronic diseases, smoking, hypertension, hypercholesterolemia, physical activity, and BMI, there was no association between perceived control and all-cause mortality. This also might be due to differences in the standardization of the final models. A significant proportion of all deaths are due to CVD. Our results clearly indicate that the relationship between perceived control, and the risk of death from all causes was mostly explained by the influence of CVD risk factors, the impact of which was not always taken into account in the other studies. In addition, all cited studies refer only to research carried out in Western Europe and United States, where socio-economic conditions and mortality rates still remain different in comparison to the countries of Central and Eastern Europe.

The relationship between perceived control and CVD mortality is confirmed by the results from other fields of science. In psychology, perceived control was described as a trait which influences the perception the situation as more or less stressful [36]. It is therefore one of the characteristics which determine the physiological stress response as the hypothalamic-pituitary-adrenal axis is also affected psychologically [37]. High perceived control was found to be related with lower concentrations of cortisol and in individuals with high perceived control cortisol levels quicker returned to baseline levels after a stressful situation than in persons with low perceived control [38]. Chronic psychosocial stress may contribute to the acceleration of the atherosclerotic process. There is some evidence which allow assertion that the development of CVD can be affected by chronic unquenched stimulation as a result of the stress response to the psychosocial situation [9].

Our study supports the hypothesis that psychosocial characteristics might appear as independent determinants of CVD, and changes in exposure to psychosocial factors could partially explain the changes in CVD mortality trends.

Low perceived control is a strong independent predictor of CVD mortality and may be considered a CVD risk factor in Polish urban population.

The relationship between perceived control and all-cause mortality was explained by the influence of classic CVD risk factors.

The HAPIEE Study was funded by the Wellcome Trust, the MacArthur Foundation and National Institute on Aging. The authors are grateful to all investigators of The HAPIEE Project and to the participants of the surveys.