The metabolic syndrome (MetS) is a constellation of risk factors including central obesity, insulin resistance, dyslipidemia, hypertension and impaired glucose tolerance, which are highly associated with increased mortality and morbidity of cardiovascular diseases [1–3]. Although the pathogenesis of MetS remains unclear, abdominal obesity and insulin resistance have been suggested to be the underlying feature [4]. Patients with MetS have increased incidence of adverse cardiovascular events compared to those without MetS after coronary stent implantation [5].

Periprocedural myocardial infarction (PMI) occurs in up to 5–30% of patients after percutaneous coronary interventions (PCI) [6, 7] and predicts adverse events and prognosis even after apparently successful procedures [8, 9].

On the basis of these data, we hypothesized that chronic ACE-I therapy before elective coronary interventions might reduce the incidence of PMI among patients with MetS.

An observational prospective cohort study was designed to determine whether chronic ACE-I treatment reduces the rate of PMI among patients with MetS. All consecutive patients scheduled for elective coronary stenting between February and June 2014 were screened for eligibility. The inclusion criteria were MetS and plan for elective percutaneous coronary stenting.

MetS was defined according to the third report of the National Cholesterol Education Program Expert Panel on detection, evaluation and treatment of high blood cholesterol in adults (ATP-III), as the presence of 3 or more of these components: high fasting glucose (fasting serum glucose ≥ 100 mg/dL or drug treatment for elevated blood glucose), abdominal obesity (given as waist circumference > 102 cm in men and > 88 cm in women), high blood pressure (≥ 130/≥ 85 mm Hg or drug treatment for hypertension), hypertriglyceridemia (serum triglycerides ≥ 150 mg/dL), and low high-density lipoprotein cholesterol (< 40 mg/dL in men and < 50 mg/dL in women) [10]. Patients were excluded if they had acute coronary events, kidney failure (creatinine > 2 mg/dL), left main coronary artery disease, chronic total occlusion, any contraindication of aspirin, clopidogrel or ACE-I treatment, increased levels of baseline creatine kinase-myocardial band (CK-MB) and/or troponin I, were on ACE-I < 1 month or on angiotensin receptor blocker therapy, needed the use of glycoprotein IIb/IIIa antagonists (Fig. 1). 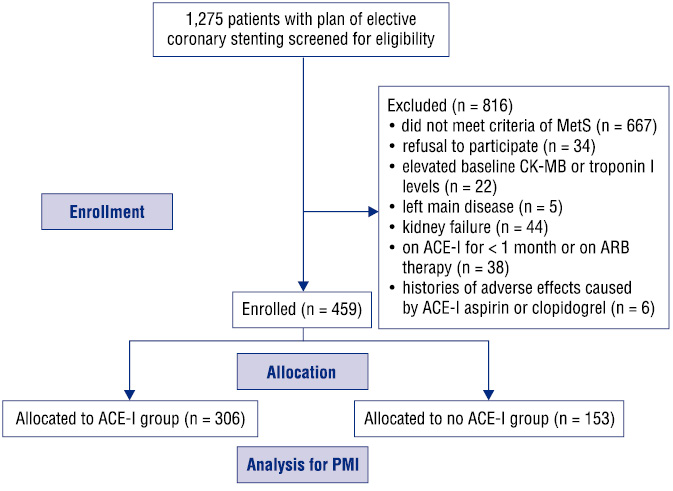 All patients provided their written, infor-med consents. This study was approved by the institutional committee on human research and registered at ClinicalTrials.gov (identifier: NCT02054390).

We presumed an 18% incidence of primary endpoints according to the previous studies in the control group and prospectively decided on an allocation ratio of 2/1. The total sample size of 410 patients would provide 80% power to detect 50% reduction of the rate in patients who received ACE-I with an alpha level of 0.05. We recruited 459 patients with MetS, of which 306 were under chronic ACE-I, and 153 were ACE-I naive.

The chronic ACE-I use was defined as more than 1 month of ACE-I treatment. Types of ACE-I used were ramipril (n = 135), perindopril (n = 96), lisinopril (n = 59) and trandolapril (n = 16). All patients received 300 mg of clopidogrel as a loading dose at least 12 h before the procedure and 75 mg/d maintenance dose thereafter. During the intervention, an intravenous bolus of weight-adjusted unfractionated heparin with a targeted activated clotting time of 250–300 s was administered. Extra pre- or post-dilatation with a balloon, or intracoronary nitrate administration for maximal epicardial vasodilation were left at the discretion of the operator. As a final step, stenting was performed.

To assess the effect of ACE-I treatment on the incidence of PMI, measurements of cardiac biomarkers were performed at baseline and 24 h after the procedure. CK-MB and troponin I were measured by chemiluminescence immunoassays on automated analyzers (Access, Beckman Coulter, Fullerton, CA). The upper limits of normal (ULN) were defined as the 99th percentile of the normal population according to the European Society of Cardiology/American College of Cardiology Foundation/American Heart Association/World Heart Fe­deration universal definition [14]. Laboratory ULN was 6.3 ng/mL for CK-MB mass and 0.04 ng/mL for troponin I. The primary outcome measure was PMI that was defined as cardiac troponin I release of > 5 times ULN 24 h after PCI. The secondary outcome measure was periprocedural myocardial injury that was defined as cardiac troponin I release of > 1 × ULN 24 h after PCI. The operators who performed the stenting procedure and the laboratory staff who measured cardiac biomarkers were blinded to treatment groups.

All analyses were performed using an SPSS software package (version 20 for Windows, SPSS Inc., Chicago, IL). Data are expressed as frequencies and percentages for discrete variables and as means ± standard deviation for continuous variables. Distributions of data were assessed by the Shapiro-Wilk test. Continuous variables were compared by Student’s unpaired t-test or Mann-Whitney U-test according to the distribution of data. The χ2 analysis or Fisher’s exact test was used to assess the significance of differences between dichotomous variables. In univariate logistic regression analysis; age, sex, body mass index, presentation of hypertension, diabetes, family history of coronary artery disease, history of myocardial infarction, serum creatinine level, plasma levels of total cholesterol, low- and high-density lipoprotein and triglyceride before the procedure, use of statins, beta-blockers, calcium channel blockers, nitrates, angiographic and procedural variables including the lesion morphology, a multivessel intervention, use of drug-eluting stents, total stent length, stent diameter, number of implanted stents, maximum balloon inflation time, maximum balloon inflation pressure and treatment assignment were assessed. Univaria­te correlates of periprocedural infarction with a p value < 0.1 plus terms for age and gender (due to their well-established association with heart disease) were included in the multiple logistic regression analyses for odds ratios (OR) and 95% confidence intervals (CI). Results with a p value < 0.05 were considered significant.

Among 1,275 patients screened for the study, 816 patients were excluded for various reasons (Fig. 1). Therefore, a total of 459 patients fulfilling the inclusion criteria were recruited to chronic ACE-I treatment and ACE-I naive groups in a 2/1 ratio. Comparisons of different demographic, clinical and angiographic characteristics are shown in Table 1.

Participants were mainly male (74%) with a mean age of 61 years. The patients in the ACE-I group had a trend toward higher baseline prevalence of hypertension (p = 0.09), diabetes mellitus (p = 0.07) and previous myocardial infarction (p = 0.07). The number of stents implanted per patient tended to be higher in ACE-I treatment group (p = 0.06).

None of the patients died in the hospital. All patients enrolled in the study underwent successful stent implantation. The overall rate of the primary outcome, defined as cardiac troponin I release of > 5 times ULN 24 h after PCI was 7.4% (34 patients) among the whole population. The incidence of periprocedural myocardial injury, which is the secondary outcome measure was 18.5% (85 patients). Troponin I levels were significantly correlated with CK-MB levels 24 h after PCI (r = 0.54, p < 0.01). Baseline troponin I and CK-MB levels were similar in both treatment groups, whereas biomarkers were significantly lower in ACE-I group 24 h after the procedure, indicating that more protection was conferred by ACE-I treatment (Table 2).

Table 2. Myocardial necrosis markers at baseline and 24 hours after the procedure.

Rates of PMI and injury are shown in Figure 2. 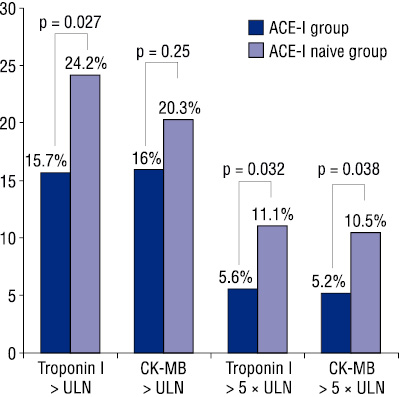 No difference was observed in the incidence of PMI between various ACE-I drugs (Table 4).

Table 4. Incidences of periprocedural myocardial injury and myocardial infarction according to the various types of angiotensin converting enzyme inhibitor drugs.

The current prospective cohort study demonstrated a lower risk of PMI among patients with MetS, who were under chronic ACE-I therapy (OR 0.51, 95% CI 0.27–0.93). Significant decreases in the incidences of both PMI and injury were provided by ACE-I treatment (p = 0.032 and p = 0.027, respectively).

Existing studies have yielded inconsistent data on whether MetS increases the risk of cardiovascular events after PCI [15–18]. However, a recent meta-analysis stated MetS as an important risk factor following stent implantation [5].

Renin–angiotensin system is regulated by hyperlipidemia, hyperglycemia and obesity, which are components of MetS and it is also a therapeutic target for several risk factors associated with MetS [19]. Although the data from the clinical studies are limited, ACE-I are known to have favorable effects on patients with MetS [20, 21]. Their effects on PMI were not assessed. Therefore, we sought to determine whether ACE-I therapy prevents PMI among patients with MetS, who underwent elective coronary stenting.

ACE-I therapy is known to be beneficial in patients with coronary atherosclerotic disease [22, 23]. The cardioprotective effects of intracoronary ACE-I therapy during coronary angioplasty were described previously among patients with stable coronary artery disease [24] and acute myocardial infarction [25]. The favorable effects of ACE-I may be due to increased endogenous bradykinin activity which mediates improvement of the endothelium-dependent epicardial vasomotion [26]. ACE-I were also shown to improve coronary microvascular functions and protect the myocardium from the procedure-related injury during PCI [24, 27]. Our data extended these previous findings by demonstrating that treatment with ACE-I therapy before PCI was associated with a lower incidence of PMI, defined as the elevation of troponin I or CK-MB values > 5 times ULN, among patients with MetS.

PCI may cause PMI by formation of distal microembolization and induction of reperfusion injury of the ischemic myocardium. PMI is associated with adverse events and poor prognosis. Several risk factors are associated with PMI and include patient characteristics, lesion related and procedure-related factors [28]. Rates of hypertension, diabetes mellitus, prior myocardial infarction and number of stents per patient were insignificantly higher among patients under chronic ACE-I treatment. First three of these risk factors are patient-related risk factors, and the last one is procedure-related risk factor for PMI. Even the rates of these components tended to be higher among patients under ACE-I therapy, rate of PMI was observed lower in this group. Other patient characteristics, lesion related risk factors and procedural features were similar between ACE-I treatment and naive groups. Although investigating the difference between various types of the ACE-I is beyond the scope of this trial, we noted no difference between 4 types of ACE-I. The positive effect of ACE-I may be considered a class effect.

There is little data in the literature suggesting that ACE-I given periprocedurally are cardioprotective. In conclusion, this prospective observational cohort study demonstrated that the chronic ACE-I therapy was an independent predictor for reduced PMI among patients with MetS who underwent elective coronary intervention. These results generate hypothesis if all patients with MetS should be on ACE-I therapy. Prospective randomized trials are needed to test this hypothesis.