Cryoballoon ablation of atrial fibrillation: How important is the proper selection of patients?

The increase in number of catheter ablation of atrial fibrillation (AF) continues around the world [1]. The time-consuming, point-by-point radiofrequency ablation technique has been challenged by using novel technologies, like cryoballoon ablation (CAB), aiming for a tantalizing “single-shot” approach to facilitate and speed up the invasive procedure [2]. The cryoballoon technology is limited to pulmonary vein isolation (PVI) and previous reports showed worse outcome in patients with non-paroxysmal atrial fibrillation (NPAF) accompanied by other comorbidity. Moreover, obtaining satisfactory effects in case of variant anatomy of pulmonary veins (PVs) can be challenging with the need for additional “touch-up” with additional catheters [3].

We hypothesized that the acute and long-term success rate after a single CBA procedure is related to proper pre-procedural selection of patients.

The combined ALARMEc risk score was proved to be an effective tool for discrimination of patients outcome after any ablation procedure [4, 5].

We calculated ALARMEc risk score for each individual patient.

Medical history was obtained during ambulatory visits with a thorough review of the medical records including ECGs and Holter-ECG recordings showing episodes of AF. All patients gave written informed consent. The study was approved by the local institutional Ethics Committee. Oral anticoagulation was stopped 3 days before intervention and replaced by subcutaneous low-molecular-weight heparin. Antiarrhythmic drugs were discontinued at least 3 days before ablation. Beta-blockers were allowed according to the protocol.

All patients underwent echocardiography to determine left atrium (LA) diameter and exclude LA thrombus. The LA size was assessed by measurement of short and long axis in the apical 4-chamber view.

The procedure was previously described [3, 6]. After the transseptal punctures were performed, heparin was introduced with the aim of keeping the activation clotting time > 300 s throughout the whole procedure. Briefly, we used 23- and/or 28-mm cryoballoon (Arctic Front™, Medtronic­Cryocath). The single application time was 240–300 s. During CBA of the right-sided PVs, unaffected phrenic movement was monitored by both continuous phrenic nerve stimulation and continuous monitoring of spontaneous breathing. An observation period after initial isolation to check for recurrence of PV conduction was 30 min. If PVI could not be achieved with a first-choice cryoballoon size, we additionally used the different sized one. If PVI could not be confirmed after 5 consecutive applications per PV with any balloon, an 8-mm tip cryoablation catheter (FreezorMAX™, MedtronicCryocath) was used for touch-up ablation to complete PVI which was verified as complete elimination of all PV signals at the antral or ostial level. Additionally, exit and entrance-block of all PVs were confirmed by pacing maneuvers, as previously described.

After the procedure, intravenous heparin was continued to achieve a partial thromboplastin time of 60–80 s, followed by oral anticoagulation with coumadin, for at least 3 months, targeting an international normalized ratio of 2–3. Antiarrhythmic treatment was stopped. Beta-blockers were allowed during the follow-up.

Our strict follow-up protocol fulfills latest recommendations [7]. After discharge from the hospital, patients were scheduled for quarterly follow-up visits. Late follow-up (> 1 year post-intervention) was performed once a year. Seven-day Holter-ECG recordings were obtained at each follow-up visit. Each patient, in case of any palpitations, was instructed to have ECG performed for confirming or excluding atrial fibrillation, atrial flutter or atrial tachycardia (AFLAT).

The study was designed as an observational cohort study with the analyzed period of one year. The end-point of the study was the first AFLAT-recurrence after the 3-month blanking period in the 1-year follow-up since the index procedure, in the absence of antiarrhythmic drugs (class I and III) therapy. Kaplan-Meier univariate analysis was used to estimate AFLAT-free survival. Continuous data were described as median, lowest (IQR25) and highest (IQR75) quartiles. The discrete variables were given in number and percentage. The differences were considered significant be error probability p < 0.05.

*Additional catheter (other sized cryoballoon and/or FreezorMax™) was needed, including 29 (7.67%) in whom both two sized balloons and FreezorMax™ was used; **45 patients with typical anatomy but critical pulmonary veins angulation; CAB — cryoballoon ablation

Peri-procedural complications are presented in Table 4.

Table 4. The incidence of complications.

Right phrenic nerve palsy (PNP) was observed in 36 (9.5%) patients during cryoablation of the right superior PV. PNP resolved in 14 cases during the procedure. An early termination of cryoenergy application during right phrenic pacing did not prevent the subsequent occurrence of PNP. In all other patients, full re-covery of right phrenic function was observed during 1-year follow-up. We observed higher occurrence of PNP in patients treated with the 23 mm balloon as compared with 28 mm: 24 vs. 12 patients, respectively.

The overall 1-year success rate after a single CAB procedure was 66.9%. The 1-year outcome related to calculated ALARMEc risk score is presented in Figure 1. The most favorable 1-year outcome was observed in patients with ALARMEc scores 1 and 2 (83% and 70% AFLAT-free, respectively). On the contrary, individuals with lowest ALARMEc scores (3 and 4; 40% and 29% AFLAT-free, respectively) should not be rather the candidates for CAB. 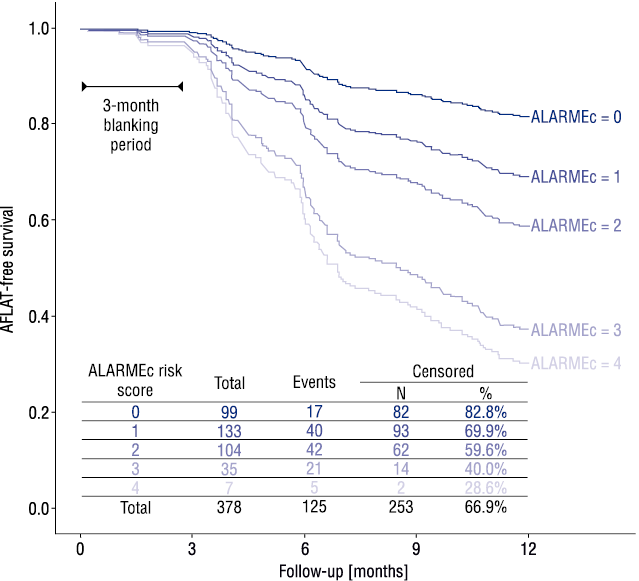 The cryoballoon technology is limited to PVI. Our results show that adequate pre-procedural selection of patients and focusing on individuals with low ALARMEc risk score, is crucial both for acute PVI and long-term outcome after CBA procedure.

The isolation of PVI is a cornerstone of CBA. Previous analysis showed that acute PVI, with a single cryoballoon catheter only, could be completed in 78% of patient [8]. Better acute results were reported in studies in which additional cryoballoon catheter (98.7%) or concomitant focal ablation (98.9%) was used [8]. Our results are comparable. We were able to isolate all PVs in 79% of patients with a single balloon only. Additional catheter allowed for PVI in 99.3%.

Pre-procedural imaging of PVs anatomy seems to be crucial, especially for centers restricted to 1 cryoballoon catheter only. Failure in acute PVI could result not only in AF-recurrence but also in LA tachycardia related to CBA [9, 10]. Mikhaylov et al. [9] showed that atrial tachycardia after CBA was more frequently observed in patients in whom procedure was more laborious (atypical anatomy and need for additional “touch-up” lesions) [10].

Recently Goginn et al. [11] has showed that the mechanisms leading to PVs conduction recovery were difficulty in correct positioning of the cryoballoon and geometrical mismatch between the cryoballoon and the PV ostium. The good cryo­balloon-tissue contact is an important parameter influencing the cryoenergy-related lesion. This parameter is likely involved in the PV reconduction process, especially at PV with difficult geometries [11]. Optimization of tissue contact may require utilization of technical maneuvers [11, 12], different sized balloons [3, 6, 8, 13], and “touch-up” focal lesions [3, 6, 8, 13–15]. Moreover, peri-procedural PNP results in abrupt interruption of cryoenergy application by an operator which can be the next cause of not-complete acute PVI success. Still, in our series, we have not found any differences in outcome comparing patients with and without transient PNP during CBA procedure.

In 1998, Haissaguerre et al. [16] showed that PVs have been the crucial source of the triggers that initiate AF and electrical PVI could be an effective therapeutic option for AF. Currently we know that AF has a tendency to becoming more persistent over time [17]. The progression of electrical and further structural remodeling of atria promotes both reentry and ectopic activity which can serve not only as substrate but also as triggers for AF [17]. Sole PVI has low effectiveness in such electrically and structurally changed environment.

Many factors (type of AF, LA size, age, sleep apnea and obesity, hypertension, LA fibrosis detected by magnetic resonance imaging, diabetes, a rise in right atrium magnetic strength) have been proposed as predictors of a poorer outcome after PVI [18, 19] but the discrepancies among authors [20–25] showed the complicated nature of already ablated atrial tissue. We applied a combined ALARMEc risk score which effectively discriminates patient outcome after any ablation procedure [4, 5]. Our data show that patients with low (≤ 1) ALARMEc risk score have most favorable outcome. In individuals with high (≥ 3) ALARMEc risk score the outcome is poor.

There are many possible reasons that patients with low (≤ 1) ALARMEc risk score may have such a good outcome. This group has not-enlarged atria and paroxysmal form of AF. The probability of deep remodeling process, in such settings, is low and the development of AF is rather trigger- and not substrate-dependent. Most triggers originate in LA-PVs junction [26]. PVI-focused CBA, which eliminates triggers, and partially substrate located near LA-PVs junction, results in high success rate in such patients. Failure of PVI in this group is rather a result of incomplete isolation of LA-PVs triggers or existing non-LA-PVs triggers. Moreover, the combination of normal-sized LA and relatively big balloon may result not only in ostial circumferential but also in PVI by ipsilateral antral block ablation, which might further improve the clinical outcome [27]. Comparable good results in similar low risk patients, were recently showed by others [15, 28]. Moreover, CBA procedure was proposed as first-line therapy in patients with lone paroxysmal AF [15]. Indeed, our results show that it can be a case for patients with lowest (= 0) ALARMEc risk score.

Patients with moderate (= 2) ALARMEc risk score are at the borderline of persistency of AF. The ablation procedure should be advocated in this group to interrupt a process of continuous remodeling. We show that PVI with CBA will have moderate 1-year success rate. More invasive approach, with additional lesions within atria, should be rather considered to further improve the outcome in this cohort.

Patients with high (= 3) and very high (= 4) ALARMEc risk score, i.e. patients with non-paroxysmal AF with concomitant comorbidity which further promotes atrial remodeling, had poor 1-year outcome. Steep drop in AFLAT-free survival was noted since the first months after the blanking period (Fig. 1). Other authors also showed very poor outcome in similar cases [29]. These patients are rather candidates for radiofrequency ablation with additional substrate modifications or in severe cases for rate control only.

The incidence of major complications was comparable to previously published data [8]. We noted peri-procedural PNP in 9.52% of cases. Still, in all our patients, the full recovery from PNP, between some minutes after cessation of cryoenergy application up to 1 year after the ablation procedure, was observed. Nevertheless, despite different safety approaches proposed recently, the problem of PNP has not been eliminated [30].

Firstly, selection of patients is crucial. Patients with typical anatomy and lower ALARMEc risk score appear to be the first line candidates for CBA procedure.

Secondly, more than one single cryoballoon can be needed to complete PVI, especially in patients with atypical anatomy of PVs.

Thirdly, patients should be aware of possible procedure-related complications, including PNP.

Finally, ongoing surveillance is warranted, even if CBA was deemed initially successful. Incidence of late recurrence may be related to the extent of ECG monitoring and earlier recurrence may be missed in selected patients with no or minimal symptoms [7]. Additionally, procedure of ablation is one of many steps in the process of treating a patient with AF. Focusing on controllable risk factors, like renal insufficiency and components of metabolic syndrome, could shift a patient to a lower ALARMEc risk group and further improve the outcome.

This is a single-center, observational cohort report with the inherent limitations of this study design. However, there was no selection bias for study inclusion since all consecutive patients undergoing cryoballoon ablation procedure were included for analysis.

The presented data reflect our experience with cryoballoon technique gained in a high volume center by operators already experienced in standard and advanced ablation procedures. The results should not be extrapolated to low-volume centers and unexperienced operators.

Cryoballoon ablation, aimed at PVI, allowed to achieve satisfactory outcome in the selected population of patients.

Acute single-cryoballoon PVI success was high (79%) but not complete. Multi-catheter approach was needed in 78 (20.6%) patients.

PNP was a transient complication. Other serious complication with the need for intervention were relatively rare.