Everolimus-eluting bioresorbable vascular scaffold (BVS) is an interesting new technology recently applied in the treatment of coronary artery lesions that might overcome the limitations of the currently used drug eluting stents (DES). Favorable features of BVS involve restoration of native vessel vasomotion, prevention of expansive remodeling, improvement of plaque stability, late lumen enlargement and potential avoidance of long-term complications, such as stent thrombosis, restenosis and neoatherosclerosis [1–4]. These beneficial effects were confirmed in preliminary studies in patients with stable coronary artery disease [4–12]. However, the utility of BVS was not sufficiently evaluated in the setting of acute coronary syndromes characterized by a different plaque pathomorphology. Acute thrombothic lesions with a large thrombus burden predispose to distal embolization and no-reflow syndrome, as well as to increased risk of stent malapposition. The latter phenomenon is associated with the dissolution of the thrombus sequestrated between the BVS struts and the vessel wall [13, 14]. There are only few reports with a comprehensive optical coherence tomography (OCT) evaluation of the BVS implantation in this group of patients [15, 16]. To add more data to the current limited body of evidence, we performed a pilot study with a qualitative and quantitative OCT examination to assess vessels’ response to the implanted BVS and the performance of the new device in culprit lesions in patients presenting with ST segment elevation myocardial infarction (STEMI).

The protocol was approved by the local Ethics Committee and all patients gave written informed consent before inclusion.

Dual antiplatelet therapy was planned to be continued for 12 months after pPCI according to the current guidelines on the management of patients presenting with STEMI [17]. The administration of glycoprotein IIb/IIIa inhibitors was left to the operator’s discretion.

Detailed characteristics of BVS implanted in this study have been previously described [18–20]. Briefly, the scaffold is made of a polymer backbone of poly-L-lactide (PLLA) covered with a thin layer of a 1:1 mixture of poly-D,L-lactide polymer (PDLLA). Both materials are completely bioresorbable within approximately 2 to 3 years. The ester bonds of these polymers are hydrolyzed into lactate and its oligomers are further metabolized in the Krebs cycles. Antiproliferative drug everolimus is integrated in this balloon-expandable device in the concentration of 100 mg/cm2 of the scaffold and 80% of the whole everolimus load is eluted within the first 30 days.

The OCT measurements using the LightLab OCT imaging proprietary software were done by analysts blinded to the angiographic data. The quantitative and qualitative OCT assessment was based on previously described methodology [4, 23–25].

Scaffold analyses were performed in 1-mm longitudinal intervals. Quantitative measurements were performed at the abluminal surface of the struts and included lumen and scaffold areas and diameters. The OCT evaluation also involved the calculation of lumen areas and diameters at reference sites. Residual area stenosis was calculated as: (1 – [minimum scaffold area/maximum lumen area at reference site]) × 100. Strut and vessel wall interaction was defined in every single scaffold strut as complete apposition or malapposition (Figs. 1–3). 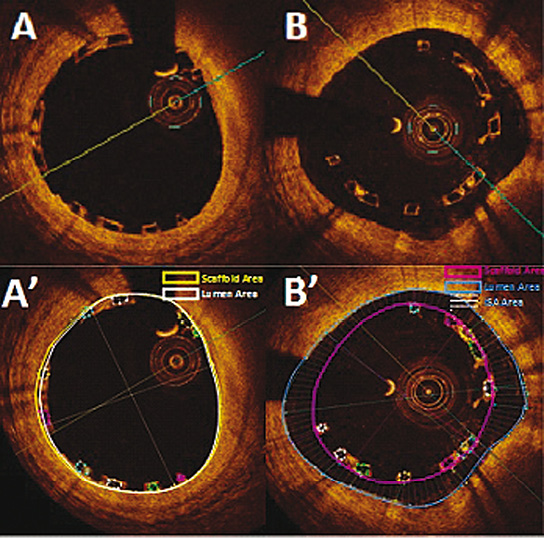 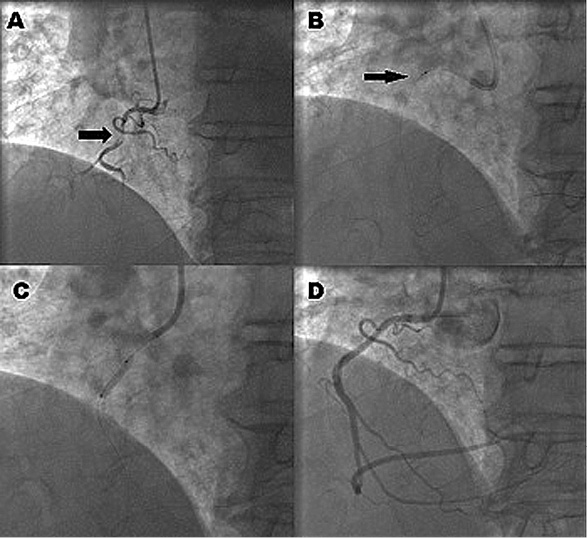 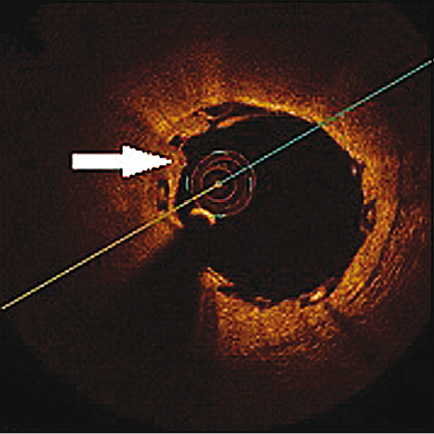 Success rates were defined as in previous studies with BVS implantation [15, 16]. Device success was described as the presence of residual diameter stenosis < 30% of the segment of the culprit lesion, covered by the BVS, assessed by angiographic visual estimation. Bailout stenting was not considered a device failure. Procedural success was defined as a device success with final TIMI 3 flow and no major periprocedural complications, such as coronary perforation requiring pericardial drainage, emergent coronary artery bypass graft or flow-limiting dissection. Clinical success was defined as procedural success and no in-hospital major adverse cardiac events (MACE) including death, stroke/transient ischemic attack and new myocardial infarction (MI).

The patient baseline characteristics are presented in Table 1.

The OCT examination was performed in all patients after optimal angiographic result was achieved. In 5 (21.7%) cases, the operator decided to perform additional postdilatation because of scaffold malapposition and/or device underexpansion revealed by OCT.

OCT data from 3 patients were excluded from further evaluation due to insufficient quality of obtained images. The final OCT data of 20 patients (25 scaffolds) are presented in Table 4.

The scaffold length by OCT was 23.4 ± 8.42 mm that was comparable with QCA measurements (21.8 ± 8.75 mm). Similarly, the results of in-scaffold MLD did not differ in both imaging modalities (2.5 ± 0.40 mm and 2.6 ± 0.35 mm, for OCT and QCA, respectively). Minimum scaffold area in OCT was 6.9 ± 1.54 mm2 and final residual area stenosis was 8.8 ± 24.37%. Edge dissections were found in 3 (12.0%) lesions — in all cases in proximal reference. The scaffold expansion was symmetrical and no disruptions or discontinuities of scaffold structure, such as overhanging struts, were observed. Out of 4,019 analyzed struts, 95.4 ± 7.96% were completely apposed, malapposition was found in 4.6 ± 5.71%. There were only 2 (8.0%) scaffolds in which more than 5% of malapposed struts were found. Qualitative OCT assessment immediately after implantation revealed a preserved box appearance in all struts.

One patient who discontinued pharmacotherapy had a non-fatal MI due to sub-acute stent thrombosis on the 9th day after BVS implantation (5 days after discontinuation of antiplatelet drugs). The TLR (and TVR) in this case involved manual aspiration thrombectomy, abciximab infusion and plain old balloon angioplasty, with good final angiographic result (TIMI 3). His LVEF dropped from 50%, directly after the primary index procedure to 38%. Two patients had non-TVR angioplasty with DES implantation. There were no other MACE observed in this study.

The principal finding of this study with precise qualitative and quantitative protocol-based scaffold analysis in OCT is that BVS implantation in patients with STEMI is safe and effective, which was clearly demonstrated by excellent device, procedural and clinical success rates associated with over 95% of completely apposed scaffolds’ struts, and low incidence of residual stenosis and edge dissections.

Dilletti et al. [15] reported 22.6% of scaffolds with more than 5% of malapposed struts, which is regarded as significant malapposition according to commonly used definition in previous studies [27, 28]. In patients with acute coronary syndromes, treated with the currently recommended DES implantation, the rate of malapposed stents reached up to 30% [28, 29]. In our study, only 8.0% of scaffolds were found to be significantly malapposed. Such a low rate of malapposition may be partially related to the small number of study patients. However, the more likely explanation is the fact that the OCT guidance used in all patients influenced the operator’s performance, leading to additional balloon postdilatations in 21.7% of cases. Although the BVS implantation technique employs the same principles utilized in conventional metallic stent angioplasty, the adequate assessment of optimal expansion of the device, based solely upon angiography, may be difficult due to radiolucent features of the BVS.

A relatively high thrombus burden (grade 4 or 5 in 72%) was observed in our group before BVS implantation. It has been hypothesized that due to the higher profile of BVS, its placement in acute thrombotic lesions might require a more intense lesion preparation compared with standard metallic stents, which may increase the risk of distal embolization, no-reflow phenomenon and reduced final TIMI flow [15]. Nevertheless, TIMI 3 flow and MBG rate were high and comparable with those reported in previous studies on pPCI with stents [30–32]. Distal embolization occurred only in 1 (4.3%) case and no-reflow phenomenon in none. These findings are in line with recently published studies in STEMI population treated with the same type of BVS [15, 16].

STEMI is an independent predictor for acute or late stent thrombosis [33–35]. In our study, one sub-acute stent thrombosis was observed. However, due to the fact that it occurred 5 days after the patient had stopped (on his own) dual antiplatelet therapy, it seems to be a consequence of inappropriate platelet inhibition rather than a device-related event.

Sequestration of thrombus burden between the struts and vessel wall may lead to late scaffold malapposition and/or scaffold thrombosis in case of its resolution before the struts dissolution. As a consequence, the turbulent blood flow around scaffold’s struts and activation of platelet aggregation on the surface of struts might facilitate new thrombus formation. However, the assessment of the risk of possible late acquired malapposition and scaffold thrombosis requires serial OCT examinations.

The results from the prospective registry and currently available body of evidence provide valuable clinical insights in favor of everolimus-eluting BVS implantation in STEMI population. However, the current body of evidence is still limited due to a small number of patients and does not allow to draw any firm conclusions regarding wider application of BVS in pPCI in everyday clinical practice.

The main limitation of this study is the low number of patients, strict angiographic and clinical inclusion/exclusion criteria and its non-randomized design. The report is of preliminary character and further investigations with a head-to-head comparison of BVS with the current standard of care are needed to assess the role of this device in the treatment of patients with STEMI.

The presented results demonstrated that BVS implantation in selected STEMI patients is safe and feasible. The acute OCT evaluation confirmed excellent performance with appropriate scaffold expansion and low rate of malapposition. Further randomized controlled trials are necessary to confirm the safety and efficacy of BVS in this group of patients.