Cardiogenic shock (CS) affects approximately 5% to 7% of patients with myocardial infarction (MI) and is the leading cause of death among hospitalized patients with MI, with mortality approaching 50% despite urgent reperfusion therapy, optimal medical care, and intra-aortic balloon support [1].

Therapeutic hypothermia (TH) is the standard of care in the treatment for out-of-hospital ventricular tachycardia/fibrillation arrest. The potential beneficiary neuroprotective effect is by reducing reperfusion injury [2]. Theoretically, the cooling properties of TH that protect the brain and promote recovery after cardiac arrest may have similar effects on other vital organs, such as the infracted heart and other injured organs due to CS. The cardioprotective effects of TH have been reported for over 30 years [3]. The benefit of mild TH as a treatment for acute MI (AMI) has now been demonstrated in several animal models [4] and small to intermediate scale feasibility randomized clinical trials [5–7]. A small reduction in temperature (2–4°C) may result in a profound reduction effect on infarct size [8]. Experimental studies have shown that there is a strong correlation between infarct size and body temperature and the size of ischemic risk zone, which becomes necrotic dependent on temperature. In humans, the adjunctive intravascular cooling before mechanical reperfusion in uncomplicated AMI appears to be safe and may reduce infarct size without significant delay in the door to balloon time [9]. Recently, it has been proposed that CS is a systemic illness that needs systemic treatment, such as TH [10]. There are yet no clinical studies investigating prospectively the effect of TH in patients with CS following AMI.

The aim of this study was to evaluate the safety and feasibility of non-invasive cooling induction as adjuvant therapy in patients with a ST-elevation MI (STEMI) complicated with CS scheduled to undergo primary percutaneous coronary intervention (PPCI).

The present study was performed in accordance with the Declaration of Helsinki. The study protocol was approved by the local Ethics Committee. Since all included patients had been sedated and invasively ventilated, the authors were exempt from obtaining prospective written informed consent. Close family members received detailed explanation about the study aims and protocol. After the patients’ recuperation and rehabilitation, the study protocol was given to all surviving patients.

It was a single center, prospective, open label, historical control study. Patients were enrolled to test the feasibility and safety of an infusion of cold normal saline at 4oC at a high rate, alongside to a designated hypothermia suit, as an adjunct therapy in patients with an acute coronary syndrome complicated with pump failure CS eligible for PPCI. Men and women between 18 and 75 years of age who presented with an anterior or inferior STEMI with ST-segment elevation of 0.2 mV in 2 or more anatomically contiguous leads or ST depression of 0.3 mV or more in V3–V4 and a duration of symptoms of < 12 h were included. Pump failure CS was defined as persistent hypotension, systolic pressure < 90 mm Hg despite fluids and catecholamine infusion. Patients with cardiac arrest, known congestive heart failure, significant valve disease, CS related to any mechanical complication (rupture free wall, ventricular septal defect, tamponade, acute mitral regurgitation, significant right ventricle infarction), end-stage kidney disease or hepatic failure, recent stroke, coagulopathy or pregnancy, or absence of maximal support therapy, were excluded from the study.

Eligible patients were prospectively assigned to TH group. Mild TH (32–34oC) was applied for 12 h; non-invasive induction was obtained by combining an IV infusion of normal saline at 4oC at a 5–15 mL/kg/h rate, alongside to a designated hypothermia suit. After induction, hypothermia was maintained by the suit only. Body core temperature was monitored independently using 3 separate probes. Re-warming was initiated after 12 h of hypothermia at a rate of 0.3oC per hour. All patients were sedated with midazolam and a muscle relaxant in order to prevent shivering. Once normal body temperature was regained, sedation was halted. After induction of hypothermia started, coronary angiogram was performed. Loading doses of 300 mg of aspirin and 600 mg of clopidogrel were given to all patients before cardiac catheterization. Patients underwent PCI according to current standard of practice.

The historical control group was selected based on similar inclusion criteria.

Troponin T and CK were sampled on admission to the catheterization laboratory, and at 12 h and 24 h after admission. Peak values were defined as the highest measured value within 24 h. The area under the curve (AUC) was calculated in each patient.

Standard statistical calculations were used. Comparison between groups was based on the unpaired t-test, statistical significance was defined as p < 0.05.

Twenty-one patients were enrolled into the study: 8 patients prospectively in the TH group and 13 in the historical control group (normothermia group). There were no significant differences in baseline characteristics between the hypothermia and the control groups (Table 1).

Laboratory and angiographic data are shown in Table 2.

Successful revascularization was achieved in all patients and a stent was inserted in all with Thrombolysis in Myocardial Infarction (TIMI) 3 flow at the end of the procedure.

There were no significant differences between the groups with regard to clinical events (Fig. 1). In the TH group, the mortality at 7 days was 50% compared with 46% in the control group. The surviving patients in the TH group returned to good functional class at 6 months and 3 of the 4 alive patients had some systolic function recuperation at 3-month echocardiography assessment. There were no differences in the incidence of fever, infection, significant arrhythmia or blood transfusion between the two groups (Fig. 2). 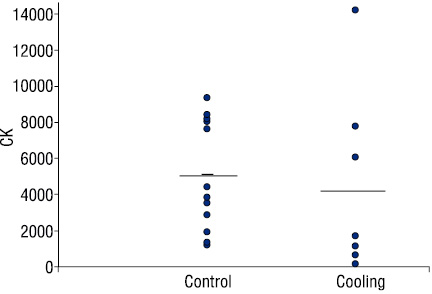 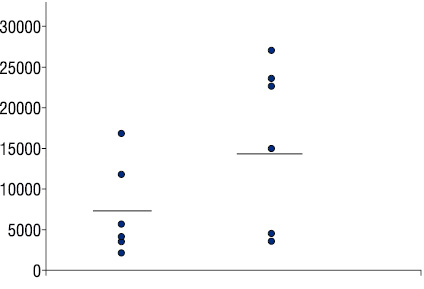 Figure 4. Calculated area under the curve.

Cardiogenic shock is a systemic clinical syndrome. Therapeutic strategies with global systemic effects may offer additional benefit over standard cardiac support. TH may potentially offer systemic beneficial physiologic effects, including the probability to improve post-ischemic cardiac function and hemodynamics, decrease myocardial damage, and reduce end-organ injury from prolonged hypoperfusion. Favorable effects of TH have been demonstrated in ischemic animal models of CS by reduction of ischemia/reperfusion injury after urgent revascularization for AMI. In humans, 3 studies showed decreased infarct size in patients with acute non-complicated infarcts treated with intravascular cooling. Clinical experience of TH in CS is limited. Several case reports and case series of TH in patients with CS, limited to pediatric and adult cardiac surgery patients, have been described. Patients with CS following AMI have not been included.

The present study demonstrates that using a combination of an infusion of cold saline together with a disposable suit to induce mild hypothermia in patients with acute coronary syndrome complicated with pump failure CS is feasible and safe without significant door to balloon delay. No significant difference in clinical event rate was observed between the groups.

The primary aim of this study was to assess the safety and feasibility of hypothermia in AMI complicated with CS. Survival and MI size reduction assessed by cardiac biomarkers was a secondary end point, and even though a significant reduction was not observed, these results should be interpreted with caution due to the small number of patients, the nature of the control group (retrospective, non-consecutive) and infarct size estimated only by biomarkers.

The results of the present study indicate that TH as an adjunctive therapy in STEMI patients complicated with CS, applied before reperfusion, is clinically feasible and safe without significant delay in time to reperfusion. Larger clinical studies are needed to evaluate the potential clinical efficacy of this approach to treat CS in the setting of AMI.