A thrombus within the left atrium (LA) is a common source of thromboemboli and it is frequently seen in atrial fibrillation (AF) [1], valve disease [2, 3], and severe left ventricular systolic and diastolic dysfunction [4, 5]. The risk of thrombus formation in the LA is known to be very high in patients with both mitral stenosis (MS) and AF. However, the risk should not be ignored in patients with MS in sinus rhythm (SR). The prevalence of LA clots in patients with MS in SR was reported as ranging from 2.4% to 13.5% in previous studies [6–10]. The pathophysiology of LA thrombosis in patients with MS includes mechanisms such as hypercoagulable conditions, blood stasis, inflammation, and abnormal platelet size and activation [11–13].

Serum uric acid (SUA), which is the final product of purine metabolism, has been associated with the pathophysiology of several diseases, including hypertension [14], chronic kidney disease [15], congestive heart failure [16], metabolic syndrome [17], type 2 diabetes mellitus [18], atherosclerosis with or without cardiovascular events [19–21], and stroke [22–23]. In addition, a correlation was recently detected between hyperuricemia and the development of new-onset AF and increased risk of ischemic stroke in patients with AF [24–27]. Previous studies suggested associations between hyperuricemia and endothelial dysfunction [28], local oxidant generation, and elevated circulating levels of systemic inflammatory mediators [29, 30].

The aim of the present study was to determine the clinical, echocardiographic, and biochemical factors that could play determining roles in the formation of LA thrombosis, and to investigate the relationship between SUA level and frequency of LA thrombosis in patients with MS in SR.

A total of 207 consecutive patients with MS (mitral valve area [MVA] < 1.5 cm2), who underwent both transthoracic echocardiography (TTE) and transesophageal echocardiography (TEE) for diagnosis or to investigate the presence of a thrombus in the LA and appendage, were enrolled in this study. All patients had attended regular hospital appointments for at least 6 months and were in SR, as documented via electrocardiogram (ECG), at every control appointment and during TEE examination. Exclusion criteria included AF, no TEE, not presenting at regular visits for least 6 months, renal failure, acute rheumatic fever, acute infection, inflammatory disease, malignancy, and a history of anti-inflammatory, anticoagulant drug use.

Informed consent was obtained from all patients. This study complies with the Declaration of Helsinki, and the trial protocol was approved by the local Ethics Committee.

TEE was performed using a commercially available echocardiography machine (VIVID 6, GE Medical) with the use of a multiplane TEE probe and a 5 MHz phased array transducer. After administering topical anesthesia using lidocaine, the TEE probe was advanced and echocardiographic images were obtained. LA thrombus was diagnosed by the presence of a clearly defined echogenic intracavitary mass with an echo texture different from that of the underlying endocardium and not due to the pectinate muscle. The presence or absence of a LA thrombus was evaluated independently by 2 observers, and any discrepancy was resolved by consensus.

All analyses were performed using SPSS V 16.0 software for Windows (SPSS, Chicago, Illinois). All data are presented as mean ± standard deviation unless otherwise stated. Comparison of parametric values between the two groups was performed by means of an independent sample t-test. Comparisons of nonparametric values between the two groups were performed by means of a Mann-Whitney U test. Categorical variables were compared by means of the χ2 test. Pearson’s test was used to test the correlation of parametric variables, and Spearman’s test was used to test the nonparametric variables. Logistic regression analysis was used to assess the predictors of LA thrombosis. Those variables with p < 0.1 by univariate analysis were included in the multivariate logistic regression analysis model and the respective odds ratios (OR) with 95% confidence intervals (CI) were calculated. All statistical tests were 2-sided and significance was determined at p < 0.05.

The baseline characteristics of the study population are shown in Table 1.

Abbreviations as in Table 1.

Table 3. Multivariate regression analysis for the investigation of independent correlates of left atrial thrombosis in the study population.

Abbreviations as in Table 1. 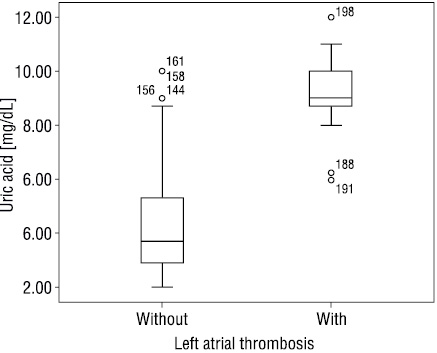 Figure 1. Serum uric acid levels of patients with and without left atrial thrombosis. 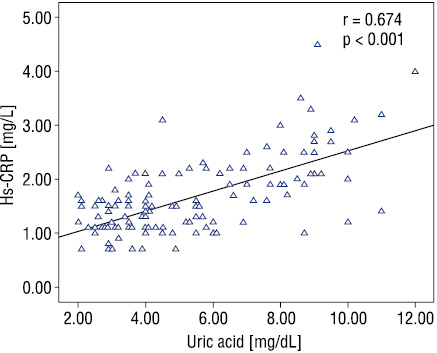 Various studies with conflicting results have been performed to evaluate echocardiographic parameters in patients in SR. Some of the studies identified only the MVA as a predictor of LA thrombus formation [35, 36]. Kasliwal et al. [9] investigated the predictors of spontaneous echo contrast (SEC) in patients with MS and SR, and they demonstrated an association between SEC and smaller MVA, larger LA, and higher mean diastolic mitral pressure gradient. Nevertheless, in the study by Saidi et al. [8], which evaluated the relationship between echocardiographic parameters and LA thrombosis in patients with MS in SR, none of the parameters was found to be predictive of LA thrombosis. A recent study by Manjunath et al. [34], which included a larger patient group than previous studies, reported a relationship between LA thrombosis and increasing age, anterosuperior LA dimension, and mean mitral valve gradient. In the present study, LA thrombus formation seemed to be associated with higher mean mitral valve gradient, smaller MVA, greater LAAPD, and decreased LA appendage filling velocity, but LAAPD was the only echocardiographic parameter found to be an independent predictor of LA thrombosis on multivariate analysis.

Whether or not gout is present, elevated SUA level is associated with cardiovascular diseases such as hypertension [14], coronary heart disease [19–21], AF [24, 26], and stroke [22, 23]. Previous studies have suggested that this correlation could be due to endothelial dysfunction, local oxidant generation, elevated vascular smooth cell proliferation, and reduced vascular nitric oxide production induced by SUA [28–30]. Furthermore, a positive correlation has been demonstrated between SUA and elevated circulating levels of systemic inflammatory mediators, such as monocyte chemoattractant protein-1, nuclear factor-κB, interleukin-1β, interleukin-6, and tumor necrosis factor-α. Similarly [28–30], in the present study, a positive correlation between SUA and hs-CRP was also detected. Several studies have detected a correlation between SUA and ischemic stroke [22, 23, 25]. Studies have suggested that SUA may have harmful effects on platelet function [40] and it may cause endothelial dysfunction [41], thereby explaining the relationship. In addition, hyperuricemia was found to be correlated with LA dimension and a significant risk factor of new-onset AF [42]. In a recent study, hyperuricemia was associated with higher stroke rate in patients with AF, and even after CHA2DS2-VASc score adjustment, hyperuricemia was found to be a significant risk factor for ischemic stroke [25]. No data on the association between SUA and LA thrombus in SR was found in the literature, and the present study was the first to investigate the relationship between SUA level and LA thrombosis in patients with MS in SR. The SUA level was higher in patients with LA thrombosis, and the SUA level was found to be an independent predictor of the presence of LA thrombi.

As a limitation of this study, the possibility of intermittent AF, cannot be eliminated with 24 h of undergoing an ECG; however, the patients in this study were regularly evaluated with the standard 12 lead ECG for at least 6 months.

In summary, patients in SR still have considerable risk for thromboemboli, and clinical, echocardiographic, and biochemical predictors are required when evaluating patients for risk stratification. In the present study, none of the clinical parameters were predictive of LA thrombus formation. However, larger LAAPD and elevated SUA levels were found to be independent predictors of LA thrombosis in patients with MS in SR.