Multicenter, randomized studies have consistently demonstrated the value of implantable cardioverter-defibrillators in reducing mortality in patients with chronic heart failure and low left ventricular ejection fraction as well as in patient with spontaneous or inducible ventricular arrhythmias [1–3]. This has led to a dramatic expansion of cardiac implantable electronic devices (CIEDs) indications [4, 5]. As more patients received CIEDs, the number of complications associated with these procedures has increased [6] including CIED infections which are rising faster than implantation rates [7–9] and which necessitate complete removal of infected CIEDs [10–13]. Traditionally, lead extraction in patients with large vegetations has been performed using open thoracotomy (OR), instead of percutaneous (EP) techniques, in order to minimize the risk of embolization [14, 15]. Recently, however, several studies have shown that lead extraction in patients with infected leads and large vegetations can be safely done via EP techniques [16–18]. Furthermore, OR may be associated with higher rates of significant adverse events that can affect mortality [12]. We therefore examined the outcome of patients undergoing lead extraction for infectious indications by OR or EP techniques, focusing on total mortality after the procedure.

All research methods for this study were approved by the University of Pittsburgh Internal Review Board. All patients (n = 353) who received lead extraction in the presence of an infected CIED at one of the hospitals of the University of Pittsburgh Medical Center from January 2005 to December 2010 were included in this study. Detailed demographic and clinical characteristics for all the patients were obtained from the electronic medical record. Procedural details were retrieved from the electrophysiology and cardiothoracic surgery operative notes.

Device infections were defined by the treating physician using clinical symptoms of infection such as fever, swelling, redness, pain, exposure of the device or leads at the device implantation site, or positive blood cultures. Using the Duke’s criteria for endocarditis, presence, size, and location of vegetations were documented by echocardiogra­phy. Patients were selected to undergo open-chest vs. closed-chest lead extraction after discussion consensus agreement between the treating electrophysiologist and the cardiothoracic surgeon. In these discussions, the risk of open-chest surgery was weighed against the risk of embolization of large vegetations during closed-chest surgery. If the patient required additional surgery including valve repair or coronary artery bypass grafting, the decision naturally favored the open surgery approach.

Prior to the procedures, patients were treated with intravenous antibiotics. The OR procedures were performed by 11 cardiothoracic surgeons, whereas the EP procedures were performed by 5 electrophysiologists. Those who received OR extractions were endotracheally intubated and given general anesthesia. Through a median sternotomy, access to the heart was obtained. Patients were heparinized and placed on cardiopulmonary bypass. The leads were dissected, keeping control over vegetations when present, to prevent embolization. Patients undergoing EP laboratory procedures had a 5 Fr femoral arterial line placed for continuous hemodynamic monitoring as well as a 7 Fr femoral venous sheath for central venous access. If indicated, a temporary pacemaker wire was placed from the femoral or jugular area. Intravenous deep sedation was used in all cases. The distal helices of leads were retracted when possible and traction was applied at the beginning of each case. If extraction was unsuccessful with traction alone, the leads were then cut, sized, and fitted with a locking stylet (Spectranetics Inc., Colorado, Springs, CO). A 12 Fr, 14 Fr, or 16 Fr laser-powered sheath system (Spectranetics Inc., Colorado Springs, CO) was used depending on the lead size and the operator’s choice. At the end of the procedure, the CIED pocket was closed with suture material or packed and left to heal by secondary intention, as clinically indicated. All EP procedures had cardiothoracic surgical back-up available on site. All patients had 4 U of packed red blood cells on standby in case of the need for emergent transfusion.

The primary outcome of interest for the present study was total mortality at 1, 6, and 12 months following the index procedure. Other procedure-related complications of lead extraction were also assessed using the definitions previously established in the consensus manuscript on lead extractions published in 2009 [19].

All continuous variables are presented as mean ± standard deviation. All categorical variables are presented as absolute numbers and percentages. Comparison of means was performed using the Student’s t-test. Comparison of categorical variables was performed using Fisher’s exact test. Survival curves were constructed using the Kaplan-Meier method and inter-group comparison was assessed using the log rank test. Independent predictors of the time to death were examined using the Cox proportional hazards test. In order to correct for baseline differences in overall clinical status, the Charlson comorbidity index (CCI) was used, taking into account the presence and severity of 19 comorbid conditions that impact mortality [2]. A 2-sided p-value ≤ 0.05 was considered statistically significant. All analyses were performed on PAWS software version 19.0 (IBM, Armonk, NY, USA).

A total of 353 patients who underwent lead extraction were included in this study (24 in the OR group and 329 in the EP group). Baseline characteristics for patients receiving lead extraction via OR or EP techniques are shown in Table 1.

Patients undergoing lead extraction via OR were more likely to have positive blood cultures, vegetations on the leads or other heart valves, and larger size vegetations. Their CCI was also significantly higher, indicating a worse overall clinical condition. All other clinical characteristics were similar between the two study groups.

Of the 129 patients who had positive blood cultures, more than two-thirds had coagulase-negative or coagulase-positive Staphylococcal infections. As shown in Figure 1, the breakdown by type of bacteria recovered from blood cultures was similar between the two study groups.

Figure 1. Bacteria recovered from blood cultures of patients undergoing lead extraction in the operating room via open thoracotomy (OR) (A) versus percutaneously in the electrophysiology (EP) laboratory (B). Staphylococcal infection where sensitivity data was not available is in white.

Table 2 shows the mortality for the two study groups at 1, 6, and 12 months after the index procedure, as well as the rates of non-fatal procedural complications. Using univariate analysis, patients in the OR group had significantly higher total mortality rates at 1, 6, and 12 months after the index procedure, compared to the EP group. There were no intraoperative deaths in either one of the two study groups.

The cause of death could be ascertained for all but 2 patients who expired within 30 days of the index procedure (4 deaths in OR group and 15 deaths in EP group). Of the 4 (17%) mortalities in the OR group, 3 patients died of cardiogenic shock, while 1 patient died of a massive stroke. Of the 15 (5%) mortalities in the EP group, 6 died of severe hypotension attributed to sepsis (1 with confirmed septic embolization), 5 suffered multi-organ failure (1 patient refusing dialysis therapy for kidney failure), and 2 patients died as a result of cardiac arrest consisting of ventricular arrhythmia and asystole, respectively. For the remaining 2 EP cases, the mode of death could not be ascertained.

Table 3 shows the characteristics of patients who died vs. those who were alive at 1 year after the index procedure. Univariate predictors of death at 1 year after the index procedure included older age, the presence of positive blood cultures, presence of diabetes mellitus, presence of coronary artery disease, higher baseline serum creatinine level, lower baseline ejection fraction, a higher CCI, and performing lead extraction via OR as opposed to via EP approach.

Table 3. Univariate predictors of death 1 year after the index procedure.

There was also a trend towards an association between female gender and death at 1 year after the index procedure. As expected, the presence of coronary disease predicted lower ejection fraction and the presence of diabetes mellitus predicted higher serum creatinine level.

The time to death in the two study groups was also examined. As shown in Figure 2, patients treated with EP lead extractions had significantly better survival than those treated with OR (p = 0.002). After adjusting for age, gender, and CCI using multivariate Cox proportional hazard analysis, performing lead extraction through OR remained an independent predictor of death (hazard ratio = 2.60, 95% confidence interval 1.26–5.37, p = 0.010; Table 4). 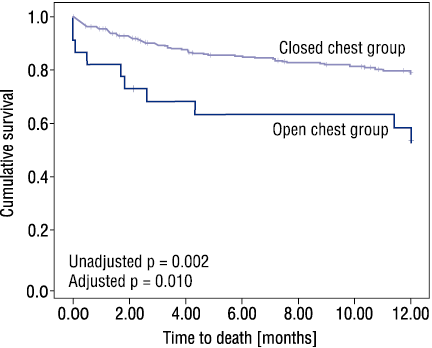 Our study reveals that in cases of CIED infection, lead extraction using closed-chest EP techniques is associated with lower mortality rates at 1, 6, and 12 months and better 1-year survival compared to the OR approach. This finding is however tampered by the fact that the OR population was significantly sicker than the EP group. In this study, we also report on the mode of death of patients who expired within 30 days of the index procedure.

There is a paucity of studies in the literature addressing the death rate and cause of death from lead extraction in the case of CIED infections. Our study included 24 patients receiving OR for infected CIED system and found that the mortality rate is about 17% at 30 days after the index procedure. This is in keeping with the results of a smaller study by Wilhelm et al. [21] examining the outcome of 8 patients with infected pacemaker systems undergoing OR in which a 12.5% 30-day mortality rate was reported. Camboni et al. [22] reported a lower rate of death 30 days after surgery (9%) in 21 patients receiving OR. It is worth mentioning, however, that this latter study included a significant number of non-infected patients who were therefore less sick compared to our patient population.

The mortality and morbidity associated with CIED system extraction for infectious indications using closed-chest techniques has been previously examined. Grammes et al. [17] reported on the feasibility of explanting such infected CIED systems in 100 patients with documented large vegetations by transesophageal echocardiography. The 30-day mortality in that cohort of patients was 10%, which is higher than the 5% rate we report in our present population. The difference in mortality is most likely attributable to the fact that our patients were less sick than the ones included in the study by Grammes et al. [17] as only 19% of our patients had documented vegetations.

The mode of death in patients who expired within 30 days of the index procedure was different between our two study groups. Whereas half of the OR patients died of cardiogenic shock presumably induced by the invasive surgery performed with general anesthesia and cardiopulmonary bypass, most of the EP-treated patients died of sepsis and multi-organ failure. These data add some insight into the shortcomings of each of these two treatment strategies.

Our study has some limitations. First, it is a single-center study that may not represent the experience at other institutions. The presence of local expertise in both surgical and percutaneous lead extractions is a prerequisite for making clinical choices at any institution and for providing surgical support in the event of complications or failure of the percutaneous approach. Second, our study is retrospective and may therefore include biases, such as performance of concomitant surgeries in the open-chest group that could not be eliminated despite the statistical adjustment of multivariate analyses. In addition, the size of the two study groups was very different, which may introduce further bias. We have, however, included all patients undergoing lead extraction for infectious indications to minimize potential sources of bias. Therefore, the numbers included in each of the study group represent the overall clinical practice at our institution. Multivariate models were also used to adjust for unbalanced variables between the study groups. Lastly, because of incomplete documentation in the operative and original implantation notes, the fixation type of extracted leads and the number of coils on extracted defibrillator leads could not be ascertained in this study.

In conclusion, infected CIED patients undergoing open-chest lead extraction are sicker and have higher mortality rates compared to those undergoing percutaneous extraction. Randomized, prospective data are needed to determine whether the procedural strategy for lead extraction can impact the outcome of CIED infected patients.