Several clinical and experimental studies have shown that unnecessary right ventricular pacing (RVP) in sinus node disease (SND) can be detrimental. Inter- and intra-ventricular asynchrony imposed by RVP may cause reduction in contractility and relaxation of left ventricle (LV), worsening mitral regurgitation, regional redistribution of myocardial perfusion and oxygen consumption, and asymmetrical hypertrophy of the LV wall [1–7].

In 23–58% of patients with SND, atrioventricular (AV) conduction is also impaired. Two thirds of these patients have first degree AV block [8, 9]. Prolonged AV conduction may lead to diastolic mitral regurgitation and in some patients may decrease exercise capacity [10, 11].

The optimal pacing mode in patients with SND and concomitant first degree AV block is not determined. Minimizing RVP can preserve inter- and intra-ventricular synchrony. On the other hand, longer AV delay may cause AV asynchrony. The purpose of the present study was to assess the impact of minimizing RVP on exercise capacity, cardiac function and quality of life.

The study was approved by the Institutional Review Board of the Military Institute of Medicine (IRB followed the Helsinki recommendations, approval number 32/WIM/2008). All of the subjects provided informed consent.

We prospectively assessed patients that had had an implantation of DDD pacemaker in our hospital due to SND. The inclusion criteria were: (1) PQ interval ≥ 200 ms at baseline; (2) the percentage of RVP ≥ 90% during the 1st week after the procedure (with default AV delay). Patients were excluded if they had second or third degree AV block or severely impaired LV systolic function (LV ejection fraction [LVEF] ≤ 35%). Patients eligible for the study were included on the 7th day after implantation. The study had a crossover design. Every patient was observed for 2 consecutive periods lasting 3–5 months. In the 1st of the study periods standard AV delay was set. In the other, AV delay was prolonged to achieve minimized ventricular pacing. The order of these time periods was randomized. After the completion of the 1st period every subject was treated with the opposite AV delay settings for approximately the same time. At the end of each study period the following data was acquired: (1) percentage of ventricular and atrial pacing (extracted from the pacemaker storage); (2) exercise capacity assessed by cardiopulmonary exercise testing (CPET); (3) LV and left atrial dimensions and LVEF determined by echocardiography; (4) quality of life assessed by short form 36 questionnaire (SF36). A paired approach was adopted in the analysis of the data.

The exact AV delay settings were individualized and dependent on a model of pacemaker, baseline PQ interval, and upper tracking rate. The maximal AV delay (for the lower rate) in the standard period was 180 ms, minimal: 170 ms (177 ms on average). In the minimized RVP period the numbers were 350 ms and 250 ms, respectively (301 ms on average). Automatic shortening of the AV delay was allowed during rate increases. The lower rate during the diurnal and nocturnal hours was set at 60 bpm and 50–55 bpm, respectively. The upper rate was set according to age and general condition of each patient. In the case of chronotropic incompetence, the rate response features were adopted. The above mentioned settings, except for the AV delays, were not changed during the whole study period.

Symptom-limited CPET was performed on a cycle or treadmill ergometer with a protocol that was personalized with the aim of having each patient reach maximum exercise in 7–10 min. The protocol was the same for both study arms. Breath-by-breath measurements of gas exchange were obtained by a metabolic cart (ZAN 680; ZAN Messgerate GmbH; Germany). Minute ventilation (VE), oxygen uptake and carbon dioxide output (VCO2) were averaged over 10 s. Peak oxygen uptake (VO2) was expressed as the mean value of VO2 during the last 30 s of the exercise test. Ventilatory anaerobic threshold (VAT) was detected by the V-slope method. VE/VCO2 slope was calculated as a linear regression function using the data points from the whole exercise period. Peak oxygen pulse (O2 pulse) was delineated as peak VO2 divided by peak heart rate.

From June 2008 to December 2011 we enrolled 50 patients on the study. The study flow diagram is presented in Figure 1. 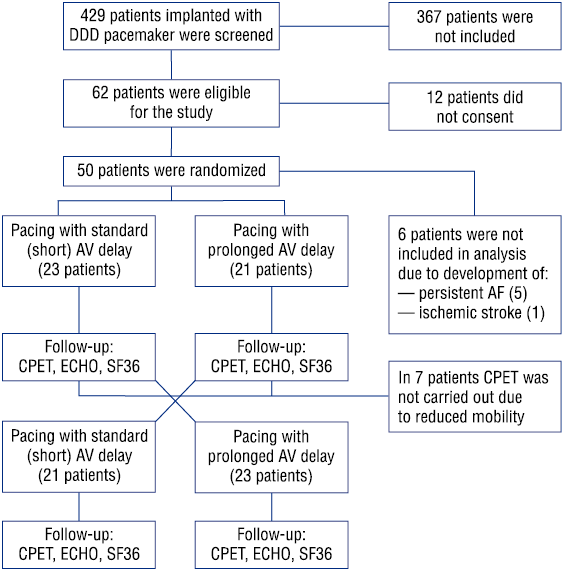 The demographic and clinical data for 44 patients used in the final analysis are summarized in Table 1.

Table 1. Baseline characteristics of the patients.

When comparing the results of 8 subscales of the SF36 questionnaire, they did not reveal any significant differences between the study groups (Table 3).

The present study compared minimized RVP with standard settings of AV delay in a selected group of patients with both SND and first degree AV block. The result was that no significant improvement in exercise capacity and quality of life was associated with a reduced percentage of RVP. These findings suggest that sequential AV pacing with standard AV settings may be a reasonable choice in this group of patients.

Several laboratory and clinical studies have shown that RVP may result in reduced LV systolic and diastolic function [6, 7, 12]. Due to ventricular desynchronization ventricular pacing may promote heart failure. The risk of developing heart failure grows with increasing cumulative percentage of RVP [13–15]. However, reducing ventricular pacing by extending AV delay may lead to AV desynchronization. Prolonged PQ interval or stimulus-R interval in atrial pacing may result in diastolic mitral regurgitation, and in consequence in heart failure [10, 11, 16]. Thus, the LV performance depends on both intra-ventricular and AV synchrony. Prolonged AV conduction in all patients included in the present study may explain why minimizing ventricular pacing had no impact on exercise capacity and cardiac function.

Similar observations were presented by Vardas et al. [17] in 15 patients with SND and normal AV conduction. They reported no difference in the anaerobic threshold according to the pacing mode: AAI or DDD with short AV delay [17]. The possible reason for this result may be that AV conduction during atrial pacing in patients with SND may paradoxically lengthen with increasing pacing rate during exercise [18, 19]. This lack of physiological adaptation of the AV interval when exercising may be the result of the maladjustment of the adrenergic tone to the heart rate determined by the pacemaker [18].

In contrast to our findings, Wonisch et al. [20] reported improvement in CPET variables with pacing modes that minimize ventricular pacing in 17 patients with heart failure and cardioverter-defibrillator. The possible explanation of these results may lie in the fact that RVP in hearts that are impaired at the baseline leads to a greater extending of intra-ventricular desynchronization. The QRS duration (QRSd) and LV activation time due to RVP are increased when LVEF is less than 40% in comparison to hearts with preserved LV systolic function: QRSd 209 ms vs. 193 ms, respectively and LV activation time 186 ms vs. 129 ms, respectively [21]. In our study, however, the LV function was not impaired at baseline with mean LVEF of 60% and QRSd of 109 ms. This may be the reason we did not observe any deleterious effects of RVP.

The results of the present study support the view that sequential AV pacing in SND patients with prolonged PQ interval is a safe alternative regarding exercise capacity, cardiac function and quality of life. However, the study group was too small and the follow-up period too short to assess the impact of minimizing ventricular pacing on mortality and heart failure development.

Conflict of interest: Krystian Krzyżanowski is a consultant of Biotronik Company.