Evaluation of beta-blockers on left ventricular dyssynchrony and reverse remodeling in idiopathic dilated cardiomyopathy: A randomized trial of carvedilol and metoprolol

Heart failure (HF) is associated with marked morbidity, mortality and frequent hospitalizations in patients over 65 years of age. Treatment of HF in order to reduce its morbidity and mortality still remains one of the major challenges in health care practice. In approximately 30% of systolic HF patients, the disease affects the conduction system and leads to delayed electrical activation of the lateral part of the left ventricle (LV) [1]. Such intraventricular conduction delay, conventionally defined as electrocardiographic (ECG) QRS complex duration > 120 ms, is known to be associated with adverse LV remodeling, clinical worsening and increased mortality [2]. Recent studies showed that various novel echocardiographic indices were more reliable than QRS duration in revealing underlying mechanical dyssynchrony and predicting clinical improvement after biventricular pacing [3].

Specific β-blockers such as carvedilol, metoprolol succinate, and bisoprolol decrease deaths and HF hospitalizations in patients with chronic systolic HF by reversing LV dilation and improving cardiac performance [4–7]. However, there are limited data on whether these β-blockers can influence cardiac mechanical dyssynchrony in patients with idiopathic dilated cardiomyopathy (IDC) [8]. In this study, we aimed to investigate the effect of carvedilol and metoprolol succinate on LV intra- and interventricular dyssynchrony and reverse remodeling in IDC patients.

Between August 2007 and June 2008, 104 con- secutive IDC patients were identified. How- ­ever, only 81 patients fulfilled the inclusion criteria and were enrolled in the study. Inclusion criteria were: (1) LV ejection fraction (LVEF) < 40%, (2) chronic stable HF with New York Heart Associa- tion (NYHA) functional class II or III, (3) no significant coronary artery stenosis confirmed by coronary angiography, (4) sinus rhythm, (5) no prior administration of β-blocker therapy, and (6) having mechanical intraventricular dyssynchrony as assessed by echocardiography. Patients with prior history of coronary artery disease, cardiac surgery, significant valvular heart disease, pacemaker implantation, and contra-indications to β-blockers were excluded. All patients received either maximal tolerated dose of ramipril with target dose of 10 mg/d or candesartan with target dose of 16 mg/d in whom angiotensin-converting enzyme inhibitors (ACEI) was not tolerated. Adequate furosemide therapy was added if needed. All medications were optimized at least 6-months before enrollment and remained unchanged during the study period.

All enrolled patients received echocardiography before and at first and sixth month after randomization. They were imaged in the left lateral decubitus position using the same ultrasound system (VIVID 7, GE Vingmed Ultrasound, Horten, Norway) by 2 experienced cardiologists who were blinded to the clinical data. Two-dimensional and M-mode echocardiograms were obtained, according to the American Society of Echocardiography guidelines. The LV volumes (end-systolic and end-diastolic: LVESV and LVEDV) and LVEF were calculated from conventional apical 2- and 4-chamber images using biplane Simpson’s technique [9]. LV reverse remodeling was defined as a reduction of LVESV > 10% at 6-month follow-up.

Pulsed-wave tissue Doppler readings were measured from apical 4- and 5-chamber images. Gain and filter settings were adjusted to eliminate background noise for a clear tissue signal. The tissue Doppler imaging (TDI) signals were recorded at a sweep speed of 100 mm/s. The sample volume was placed in the basal portions of the septal, posterior and lateral walls of LV and that of right ventricular (RV) free wall. The time interval between the onset of the QRS complex and the onset of the peak systolic velocity was derived at each region. Intraventricular dyssynchrony was defined as the maximal time difference between 2 LV walls > 60 ms. Interventricular mechanical dyssynchrony referred to the maximal time difference between RV and LV walls > 56 ms [10]. All measurements were corrected for the heart rate (HR) using Bazett’s formula to avoid the confounding effect of HR changes during β-blocker therapy [11].

N-terminal pro-B-type natriuretic peptide (NT-proBNP) levels were measured at baseline and 6-months. Blood samples were collected using antecubital venous puncture and transferred to EDTA-coated test tubes. Blood samples were then centrifuged in the hospital laboratory at 4°C and the plasma was frozen at –80°C. Plasma NT-proBNP level was determined immunoenzymatically using the NT-proBNP ELISA kit (Biomedica).

Reproducibility of the measurements

Intra- and inter-observer variabilities of echocardiographic measurements were assessed in 10 randomly chosen patients. Variability was calculated as the mean percent error, derived as the difference between 2 sets of measurements, divided by the mean of the observations. Both investigators were blinded to the patients’ diagnosis.

The Statistical Package for Social Sciences, version 13.0 (SPPS, Chicago, Illinois) was used for statistical analysis. Data were expressed as mean ± standard deviation for continuous variables, and as numbers (percentages) for categorical variables. Continuous variables were analyzed by the unpaired Student’s t-test. Comparisons of pre- and post-treatment variables were made using the 2-tailed, paired Student’s t-test. Comparison of change in post-treatment and pre-treatment (∆ = [post-treatment value] – [pre-treatment value]) echocardiographic parameters and NT-proBNP between the two groups was performed using Student’s t-test. Pearson’s or Spearman’s correlation analysis was performed to estimate correlations between variables. A p value < 0.05 was considered statistically significant.

Only 74 (91%) patients (38 in carvedilol group and 36 in metoprolol group) completed the scheduled investigations. They all received maximal tolerated doses of either carvedilol or metoprolol succinate for up to 6 months after randomization, during which time the background therapy with an angiotensin II receptor blocker/ACEI and/or diuretic was continued. Seven of 81 patients did not complete the study protocol (2 died, 1 developed sinus bradycardia and 4 were lost to follow-up, Fig. 1). The mean maintenance dose of β-blocker was 16 ± 8 mg/day in carvedilol group and 57 ± 18 mg/day in metoprolol group. 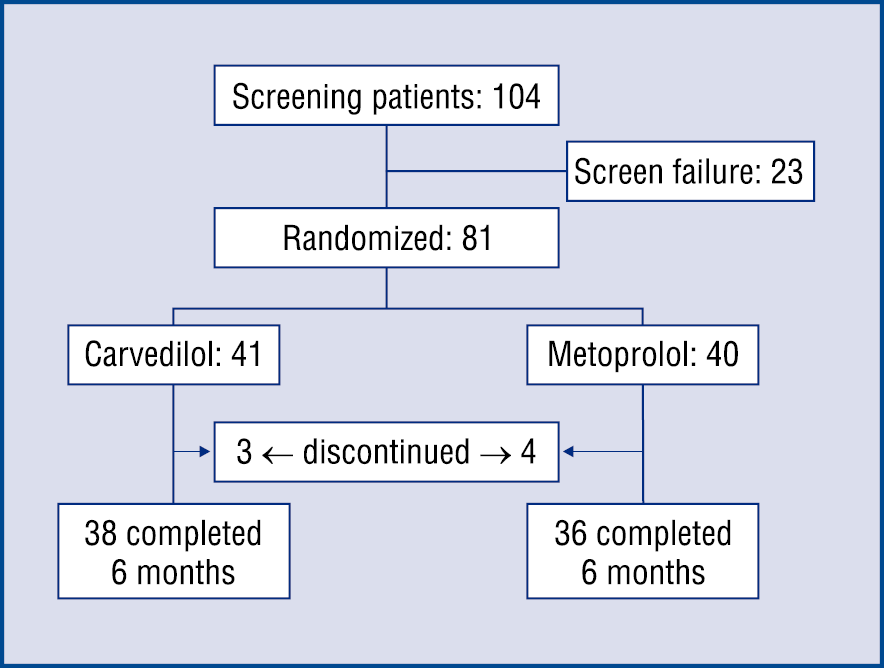 Figure 1. Disposition of the patients.

Both groups had similar age, gender and other clinical characteristics (Table 1). Baseline LV volumes and EF, intra- and interventricular electromechanical delay measurements, and NT-proBNP values were similar between two groups.

Table 2. Comparison of the effects of carvedilol and metoprolol succinate over intra- and interventricular dyssynchronies, ventricular reverse remodeling and hemodynamics in the first and sixth months.

Table 3. Change in selected variables during 6 months of treatment with either carvedilol or metoprolol succinate. 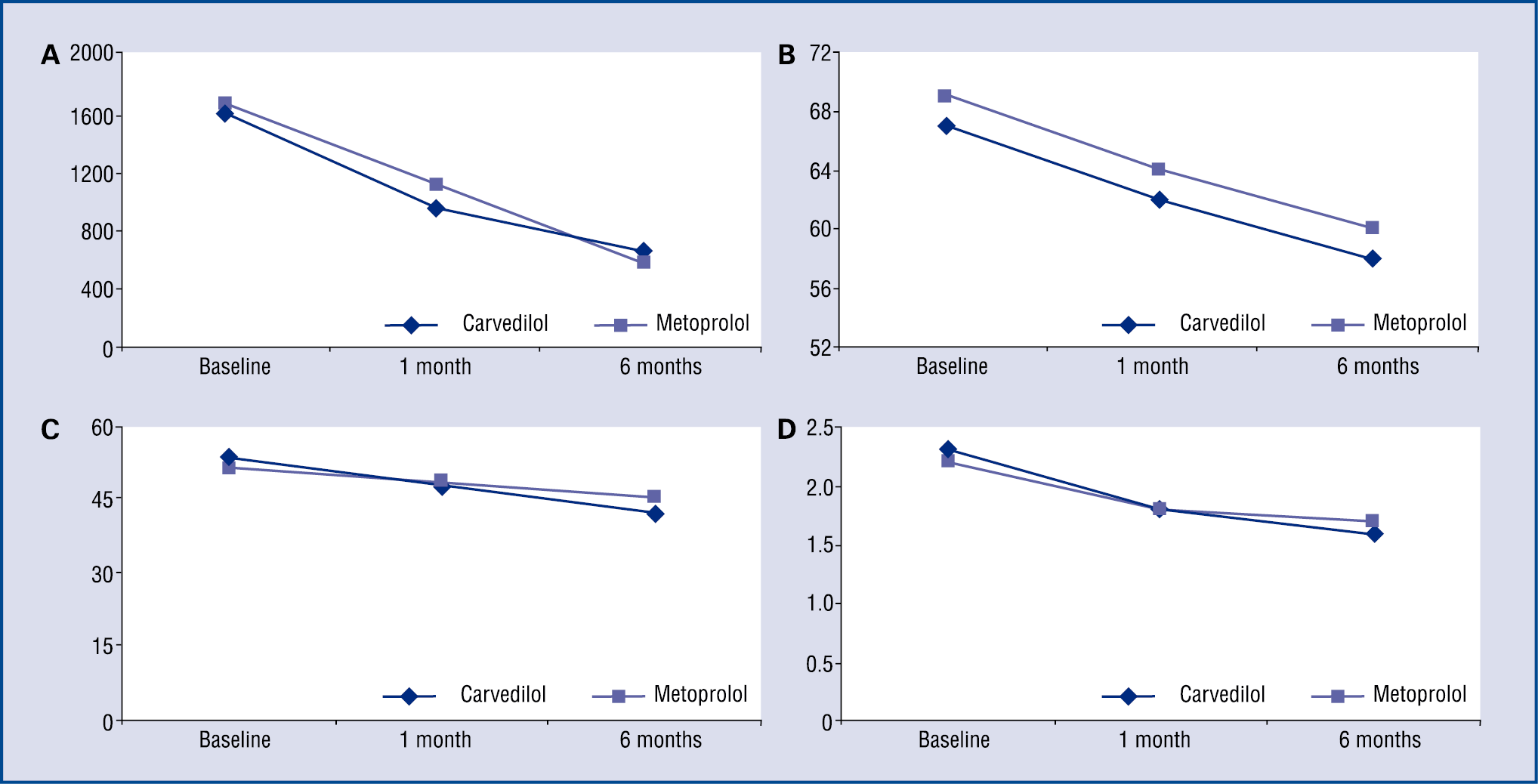 This study demonstrates that β-blockage with either carvedilol or metoprolol succinate in addition to standard medical therapy improves LV dyssynchrony, LVEF, LVESV and LVEDV. Decrease in NT-proBNP level accompanies improvement in LV function and dyssynchrony. Although carvedilol group showed higher decrease in LVEDV, and increase in LVEF, both drugs significantly improved LV dyssynchrony.

Approximately one third of the patients with HF demonstrate intraventricular conduction abnormalities [12]. Cardiac resynchronization therapy (CRT) improves symptoms and prolongs life in patients with refractory systolic HF and wide QRS complex (> 120 ms) on ECG [13]. In past years it was believed that wide QRS on ECG was the most powerful indicator of intraventricular dyssynchrony. More recently, it has been pointed out that even patients with slightly prolonged or normal QRS may exhibit dyssynchrony [3].

In mid 1990s, several studies showed that simultaneous electrical stimulation of both ventricles may improve cardiac function in HF patients with intrinsic conduction delay [14, 15]. In following years, CRT in addition to medical treatment was shown to improve dyssynchrony, induce LV reverse remodeling and reduce mortality in patients with systolic HF [16–18].

Beta-blockers were first introduced for HF treatment in 1975 by Waagstein [19]. Contemporary HF treatment guidelines recommend addition of carvedilol, metoprolol XL or bisoprolol to conventional therapy for treatment of systolic HF, based on the results of randomized studies [4–6, 20, 21]. Carvedilol and metoprolol succinate are the most widely used β-blockers in HF management worldwide. Carvedilol functions by blocking β1-, β2-, and α1-adrenoreceptor, whereas metoprolol blockes β1 adrenoreceptors [22]. Although isolated studies demonstrated a reduction in mechanical dyssynchrony with carvedilol in systolic HF patients [8, 23], there is a lack of data comparing its therapeutic effects on mechanical dyssynchrony with metoprolol in IDC patients.

Progressive ventricular dilatation existing in patients with IDC usually accompanies intraventricular dyssynchrony. Optimal medical treatment with β-blockers have been shown to induce reverse remodeling which may eventually lead to improvement in LV mechanical dyssynchrony [24]. The mechanism of these benefits is likely multifactorial and related to negative chronotropy, which reduces myocardial oxygen consumption, reduction of the impact of high intramyocardial norepinephrine levels [25]. In reversing LV dilatation β-blockers appear to be superior to the other classes of drugs, with a stronger correlation between dose and effect [26, 27]. Several trials have been conducted to find out the most efficient β-blocker in improving LV function and reducing LVEDV and LVESV [28]. Ruwald et al. [29] reported less HF hospitalizations or deaths in systolic HF patients taking carvedilol than metoprolol, in particular patients with CRT and left bundle branch block, implying a novel, synergistic effect with carvedilol. However, a meta-analysis written by Chatterjee et al. [30] suggested that the benefits of β-blockers in systolic HF seem to be mainly due to a class effect, as no statistical evidence from current trials supports the superiority of any single agent over the others.

Most of the limitations are inherent to the relatively small sample size and modest follow-up period. Other more advanced echocardiographic techniques like speckle-tracking may be more robust than pulsed-wave TDI in assessing mechanical dyssynchrony. In addition, this study did not use cardiac magnetic resonance to rule out other causes of HF. Lastly, the addition of a placebo group would be helpful in interpreting the results more accurately.