The pacemaker (PM) implantation may cause some difficulties in case of persistent left superior vena cava (PLSVC) reported in approximately 0.3–0.5% of the general population [1–3]. The abnormal early embryonic development of great thoracic veins may also result in abnormalities of the conduction tissue because of the proximity of these areas. In most cases (80%), there are double superior veins. Usually, PLSVC drains away to the markedly dilated coronary sinus (CS), and only sporadically to the left atrium (LA). Very rarely, there is a CS ostial atresia and PLSVC drains backward from CS to the right superior vena cava [4]. PLSVC occurs in 3–10% of patients with other congenital cardiac malformations, most often with the atrial septal defect. An important clinical implication of PLSVC is its influence on different types of arrhythmias [5–7]. There are some case reports concerning patients with PLSVC [8–12], but not a long-term observations after PM implantation.

There were 3,452 patients, who underwent PM implantation from October 1995 to December 2006 in our center. Four cases of PLSVC patients were enrolled for the observation. All the patients had fully documented clinical and electrocardio­graphic (ECG) indications for PM implantation, and the procedures were performed using standard leads and pulse generators. After the discharge, regular visits took place in the out-patient clinic according to the scheme: 1 month, 3 months after implantation, and every 6 months during follow-up. An ambulatory ECG monitoring was performed to assess the presence of arrhythmias and efficacy of pacing. Clinical characteristics of 4 patients are presented in Table 1, and PM parameters in Table 2.

Patient 1 (Case 1). A 54-year-old man with tachycardia-bradycardia syndrome and a history of ischemic stroke was referred for PM implantation in 1997. The patient complained of palpitations, dizziness and syncopal episodes. At the time of implantation in a standard 12-lead ECG there was a normal sinus rhythm with PQ duration of 120 ms (P-wave duration 80 ms) but the 24-h ECG monitoring showed many episodes of atrial fibrillation (AF) which ended in pauses and severe sinus bradycardia. Trans-thoracic echocardiography did not show any significant structural changes. During the implantation procedure the left subclavian vein approach was not successful, therefore the J-shape, unipolar lead with a passive fixation was inserted via right subclavian vein. The route of the lead was unusual: it passed through the mediastinum from the right to the left side and then went down along the left border of the heart and turned to the right atrium (RA). The tip of the electrode was placed on the lateral wall of the RA because a RA appendage (RAA) could not be achieved. After the PM implantation stimulus to Q wave interval (SQ) duration was 220 ms and P-wave duration was 160 ms. A contrast echocardiography was performed. The micro-bubbles appeared first in the dilated CS, than in the RA after the injection of contrast (cooled 0.9% NaCl) to the left and right antecubital veins. Angiography was performed to confirm a single, left sided superior vena cava.

Despite antiarrhythmic treatment with 3 different drugs, the patient was hospitalized and cardioverted several times for paroxysmal AF. Biatrial stimulation (BiA) was considered an alternative. In April 2001, a bipolar electrode with an active fixation was inserted into the CS to pace the LA. Both leads were connected by a Y-connector to the SSI pacemaker (Fig. 1). In the described case, the RA electrode was a cathode and the CS electrode was an anode. BiA pacing reduced P wave duration and the SQ from 180 to 120 ms and 220 to 160 ms, respectively. After the BiA system implantation, the patient was not hospitalized for paroxysmal AF and had only self-terminating palpitations. However, in 2005 his rhythm degenerated to a chronic AF. 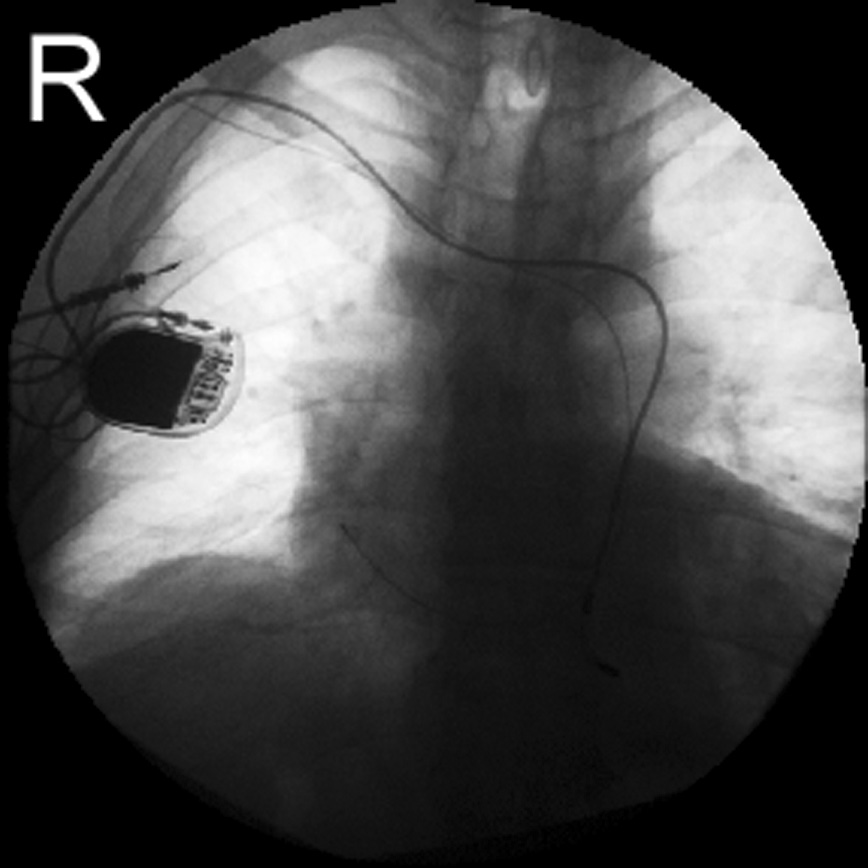 Patient 2 (Case 2). A 73-year-old man with paroxysmal atrial flutter and AF followed by symptomatic sinus bradycardia and paroxysmal sinoatrial block was presented for PM implantation. His echocardiogram revealed left ventricular (LV) hypertrophy, mild mitral and aortic regurgitation. The dilated CS was noticed in a modified parasternal long-axis view with the diameter of 38 × 15 mm. The left sided approach was chosen for a PM implantation. The course of advanced lead indicated the presence of PLSVC. The attempt to reach RAA was not successful and a bipolar active fixation lead was screwed in RA free wall. Next, bipolar passive fixation lead was placed in the right ventricular outflow tract (RVOT). The presence of PLSVC was confirmed by angiography and the trans-esophageal echocardiography. No other malformations were found. Amiodarone (200 mg/day) was prescribed to prevent existing supra ventricular tachyarrhythmias with a good clinical effect.

Patient 3 (Case 3). A 75-year-old woman with a congestive heart failure and permanent AF was admitted due to syncope, palpitations, weakness and exercise intolerance. Holter monitoring documented many episodes of severe bradycardia < 35/min. Trans-thoracic echocardiography revealed mildly impaired LV ejection fraction (45% Simpson’s method), mild mitral, aortic and tricuspid regurgitation. In addition, an enlarged CS was found. During the PM implantation, the lead was advanced along the left border of the sternum (Fig. 2). The electrode was intentionally placed into one of the cardiac veins on the posterior wall of the LV, without CS visualization, but only a stylet preforming, with good electrical parameters. Pacing at 10 V did not cause any diaphragmatic stimulation. Finally, the LV pacing with the right bundle branch block morphology in a standard 12-lead ECG was obtained. The diagnosis of PLSVC was confirmed by angiography. Clinical improvement and ventricular arrhythmia reduction were observed during the follow-up. In January 2013, after almost 10 years, the PM was changed due to a battery timeout. Patient 4 (Case 4). A 75-year-old male was admitted to the hospital due to numerous presyncopal attacks and symptoms of congestive heart failure. His medical history included hypertension, permanent AF, diabetes mellitus, dyslipidemia and obesity (BMI = 35). Ambulatory ECG monitoring revealed many episodes of bradycardia < 40/min and pauses. The transthoracic echocardiography revealed dilated LV (end-diastolic diameter = 63 mm) with a normal ejection fraction, enlarged LA (52 mm) and a moderate mitral regurgitation. A passive fixation ventricular lead was inserted via the left subclavian vein, again the electrode advanced along the left edge of the sternum. Therefore, venography was performed intra-operatively confirming the presence of PLSVC draining to the large CS. The J-shaped stylet was used to introduce the lead via the tricuspid annulus to the RVOT. The patient was discharged and remained free of symptoms ever since. An anticoagulation therapy was continued to prevent thromboembolic complications.

During the mean follow-up period of 110 months, pacing was effective. One patient (Case 1) required another operation and change of the pacing mode due to progressive interatrial conduction prolongation during the follow-up. No serious complications related to the PM were observed. The basic data concerning parameters of pacing are presented in Table 2. Selected information obtained from 24-h ECG monitoring, symptoms related to arrhythmias like syncope, palpitations, and functional class (NYHA) during the follow-up are presented in Table 3.

Table 3. Estimation of arrhythmias and related symptoms during follow-up based on Holter monitoring.

Historically, the first diagnosis of PLSVC could be made only by means of autopsy but at present, this anomaly may be diagnosed by several vital diagnostic examinations. A trans-thoracic echocardiography is the most relevant method for PLSVC recognition, especially with a contrast injection. The enlargement of the CS present in echocardiography should lead to PLSVC suspicion. However, visualization of the CS by trans-thoracic echocardiography is not possible in about 20% of patients. A contrast trans-esophageal echocardio­graphy is necessary to exclude any other congenital cardiac malformations concomitant with this anomaly [13]. Another simple and cheap method is venography [14], which may be performed intra-operatively during a PM implantation procedure. However, it should be avoided in patients with severe renal dysfunction due to the risk of contrast nephropathy. In addition, magnetic resonance ima­ging, computerized tomography and first pass radionuclide angiocardiography are useful but rarely performed methods in evaluation of PLSVC [15]. Despite all this advanced diagnostic methods, PLSVC is most often recognized during medical procedures such as central venous catheter insertion, electrophysiological study, cardiac surgery and PM or cardioverter-defibrillator implantation. The presence of PLSVC may be suspected during the PM implantation on the basis of a left sided route of the electrode observed during fluoroscopy. In case of PLSVC, the proper positioning of a lead is difficult, the total time of procedure and the time of fluoroscopy are longer than usual.

Some authors suggest that PLSVC is coexistent with arrhythmias. Rhythm abnormalities were observed in 36% in a series of 121 published cases with PLSVC and absence of the right superior vena cava [16]. A few mechanisms leading to arrhythmias are distinguished:

One of the main purposes of our report was to demonstrate safety of the cardiac pacing via PLSVC in a long-term follow-up. Almost all cases presented in the literature have short follow-up periods, which do not allow assessing the consequences of electrodes presence in PLSVC on the PM and heart function. Biffi et al. [20] implanted 2 PM and 2 cardioverter-defibrillators via PLSVC. After 41 months no device malfunction or lead dislodgement were observed. No complications occurred during the 4-year follow-up in another patient with DDD pacemaker implanted via PLSVC [21].

In Cases 2 and 4, ventricular leads were implanted into the right ventricle septal aspect of the outflow tract. This position of the lead seems hemodynamically more profitable than the classic right apical (RVA) pacing and is easier to achieve via PLSVC. In Case 3, the passive fixation bipolar lead was advanced into the left postero-lateral vein via PLSVC. This route was also used by Gaba et al. [22] during a DDD pacemaker implantation but an over-the-wire electrode was used after the CS venography. In our case, leads dedicated for the LV pacing were not available at that time.