Does a blanking period after pulmonary vein isolation impact long-term results? Results after 55 months of follow-up

Atrial fibrillation (AF) is the most common supraventricular tachyarrhythmia and is responsible for one third of all hospital admissions due to arrhythmia. The incidence of AF is 1–2% of the total population and increases with the age [1, 2] up to 8% in the population over 80 years [3].

Radiofrequency ablation with pulmonary vein isolation (PVI) is an accepted method for treatment of AF [4]. Despite the sophisticated technology involved in AF ablation therapy, however, AF recurrence may be observed either in the early period after PVI or during long-term follow-up. In some patients, temporal exacerbation of AF is observed during the early period after PVI. Furthermore, it is not clearly defined when the early periods ends and when the late period starts. Previously, AF recurrences during the first weeks after PVI were treated as a non-significant factor, but nowadays they are regarded to have an impact on long-term PVI failure [5–7].

Antiarrhythmic prophylaxis with limited efficacy may result in adverse effects [8–10]. The role of early AF recurrence is unclear.

This study has three main aims: 1) to find the risk factors for early and late recurrence of AF after PVI, 2) to assess the importance of early AF recurrence, and 3) to check the usefulness of antiarrhythmic prophylaxis during the early period after PVI.

The study was conducted in prospective randomized mode. A total number of 210 consecutive patients who had undergone PVI due to AF were analyzed (2003–2007). In all patients, reversible causes of AF were excluded, as was pre-procedural left atrial appendage thrombus. The inclusion criteria were: 1) first PVI due to AF; 2) age above 18 years; and 3) sinus rhythm (SR) during the first 24 h after PVI. The exclusion criteria were: 1) reversible cause of AF; 2) bradycardia of 50 bpm or less, atrioventricular or intraventricular blocks; 3) contraindications to antiarrhythmic agents used during study (in case of contraindications to amiodarone, sotalol was used); and 4) PVI procedure with heart tamponade complication.

The study group was randomly divided into three groups:

The above therapy scheme was continued for 2 months after PVI.

At discharge, all patients were planned for at least two 24-h Holter electrocardiography (ECG) registration, followed by a control visit after the first and second months after PVI. They were also asked to provide symptoms registration during the first 2 months after PVI and to complete ECG documentation in case of any arrhythmia symptoms occurrence. After a minimum period of 2 years after PVI, the patients were called for a follow-up visit, or medical data were obtained through a telephone call. Every episode of AF lasting 30 s or more was classified as AF recurrence (Fig. 1). 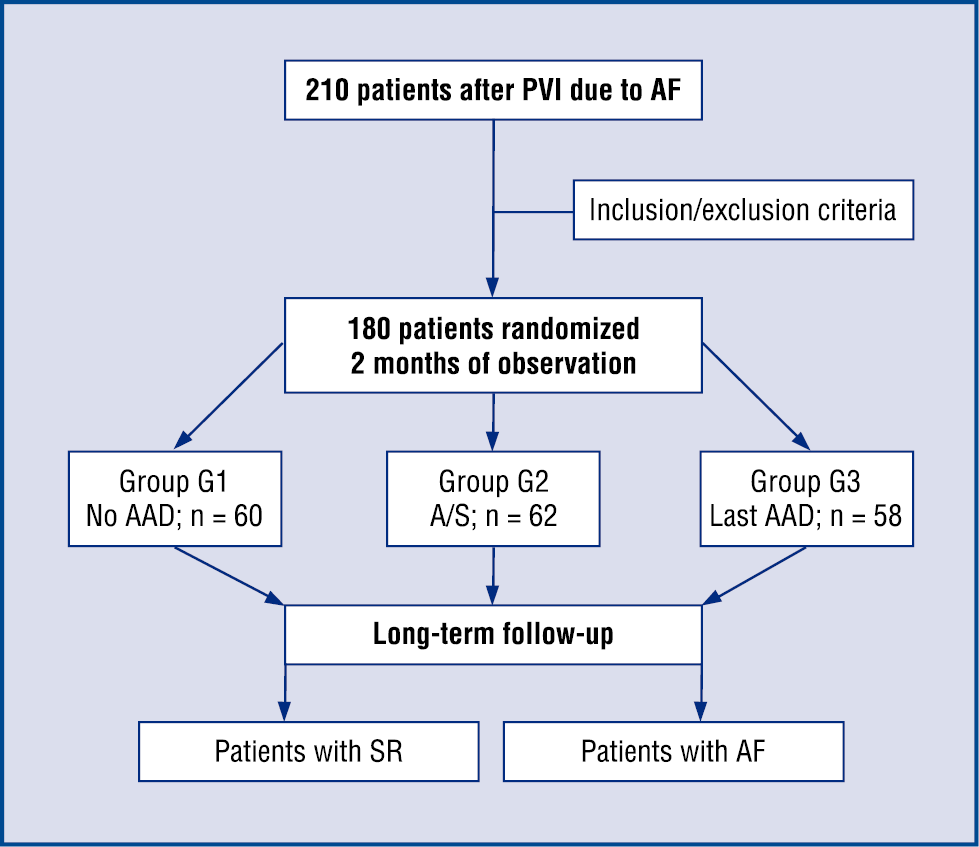 The AF recurrence rate was assessed after an analysis of all available rhythm recordings: 24-h Holter monitoring at 30 and 60 days after PVI and every ECG registration made on occurrence of symptoms suggesting arrhythmia.

Due to different protocols on result description among different centers, the medical data gathered during follow-up were inconsistent. To make them comparable, the results were divided into groups:

During short-term observation, two groups of patients, those without AF recurrence and those with a single episode of AF, were treated as successful PVI procedures, whereas the groups with a reduction in severity of AF and without any change were regarded as procedural failures. Ana­lysis was performed separately in the subgroups (no AF, single AF episode, unsuccessful PVI) and the cumulative successful/unsuccessful groups.

During long-term observation, there were only two groups considered: patients with SR and those with documented recurrence of AF. Clinically important, AF recurrence was defined as any documented, ECG-recorded episode of AF lasting at least 30 s.

In all cases, segmental PVI was done with a 4 mm-tip not irrigated conventional radiofrequency catheter (Marinr, Medtronic) with 30–35 W power and a 50oC cutoff (RF generator Atakr II, Medtronic). Pulmonary veins were mapped with a 10-pole circular diagnostic catheter with varia­ble diameter (Lasso 2515, Biosense-Webster). LocaLisa system (Medtronic) was used as an additional tool to fluoroscopy for catheter position control during energy delivery.

Continuous data were presented as mean values with standard deviation or as mean values with media. Differences among continuous data were evaluated by Student’s t-test. Categorical data were presented as numbers and percentages, and compared with Pearson’s χ2 test. The relationship among continuous data was tested with the Spearman rank correlation coefficient. Differences among the three groups were tested with one-way ANOVA. Multivariate analysis was performed with the linear regression method. The statistical significance level was p < 0.05. Data were analyzed with the STATISTICA (Statsoft Poland) software.

Table 1 shows the clinical and demographic data of the patients. The study population consisted of 180 patients (mean age of 50.2 ± 11.2 years, 123 males). In 36 patients, a persistent form of AF was recognized.

Table 1. Clinical and demographic characteristic of the study population.

A total number of 180 patients were rando­mized into one of the following three groups:

Table 2. Characteristics of the study group with short-term follow-up.

Table 3. End point occurrence in the study group during 2 months of observation.

To check for the impact of any antiarrhythmic treatment, the results obtained during the first 2 months after PVI were analyzed for frequency of AF recurrences in two subgroups: G1 and cumulative G2 and G3 (Table 4).

Long-term results. During the mean 55-month observation period, reliable data were availa­ble in 137 (80.1%) patients. During this time, 47 patients maintained SR, equivalent to 34% of the study group. Patients with repetitive PVI were classified under AF recurrence, and the final PVI results were not included in further analysis — some of repetitive PVI were performed in different center.

Table 5. Characteristics of the study group in long-term observation. This study aimed to verify the hypothesis that AAD impact the results of PVI during the early period. Long-term verification, although difficult, was also performed. Our single-center study group consisted of consecutive patients qualified for PVI, which makes the whole group more representative of the general population.

This study found no association between antiarrhythmic strategy and PVI results during the early period after radiofrequency ablation, which is opposite to previously published data [11]. In the 5A study Antiarrhythmics After Ablation of Atrial Fibrillation, Roux at al. [11] assessed antiarrhythmic prophylaxis during the first 6 months after PVI. A total number of 110 patients were randomized into two groups: those using AAD and those without any prophylaxis. The clinical characteristics of the patients presented in this study were similar to those in the 5A study population; however, persistent AF patients were excluded in the latter. In the 5A study, AAD resulted in a significant reduction in number of AF recurren­ces, hospital admissions, cardioversions, and drug change due to symptomatic atrial arrhythmias: 19% in the AAD group vs. 42% in those without AAD (p = 0.005). Why do these two similar studies show opposite results? The answer may lie in the study methodology and the assessment criteria for the end result. First of all, the study population was different: in our study, both paroxysmal and persistent patients were included, but prior PVI was a criterion for exclusion. Persistent AF patients were distributed among three groups evenly. Thus, the reason may be the difference in the definition of AF recurrence. In both studies, every atrial tachyarrhythmia was treated as AF recurrence, but in the 5A study, the time criterion was different from that recommended in the guidelines. That is, the 5A study specified that arrhythmia should last at least 24 h or that the symptoms should lead to earlier cardioversion; according to the guidelines, this time criterion should be 30 s. The definition of recurrence in the 5A study may lead to underestimation of the real number of arrhythmia episodes in a study group. Such a definition seems controversial, especially in the continuation of the 5A study where, during 6 months of observation, AF recurrence was defined as lasting 60 s or more [12]. In our study, the AAD group was divided to check the hypothesis that AAD that is ineffective before ablation may be successful in AF prevention after PVI. The results presented in this study showed that this hypothesis is false. To compare the results of both studies, a separate analysis was made on patients without AAD vs. those receiving any AAD. There were no significant differences in recurrence rate in both groups.

AF recurrence risk factors during the early period after PVI

This study found no risk factor for early AF recurrence (EAFR) after PVI. Other studies obtained similar results, even with the definition of early period extended to 3 months and ECG registration with loop recorders [13].

During the mean 55-month observation period, only 34% of patients maintained SR after a single PVI procedure. The observation period in different publications ranges from 6 months to 6 years. Although single and repetitive procedures were included in these studies, the common conclusion is that long-term results are less optimistic than short-term ones. One study reported a 6-year success rate of 23% after a single procedure and of 39% after repetitive ablation.

In the Bordeaux group, the 5-year follow-up was based on 24-h Holter registration and standard ECG in case of symptoms suggesting arrhythmia recurrence with duration of 30 s of more as a diagnostic criterion for a clinically significant episode [15]. In the success rate analysis, a time-dependent reduction in freedom from AF was observed. After 1, 2, and 5 years of observation, SR was maintained in 40%, 37%, and 29% of patients, respectively. This study group included long-lasting persistent AF patients. This form of arrhythmia was the only independent risk factor for late AF recurrence.

Similar to other studies, the SR documentation method is the most important limitation of this work. The use of 24-h ECG registration and standard ECG in case of symptoms suggesting arrhythmia recurrence may lead to underestimation of the real recurrence rate. The study group consisted of patients from different regions of the country; thus, the results of the Holter ECG monitoring were presented in different manners. To make them comparable, categories of results were used instead of objective arrhythmia counts. Different types of AF may have influence the results although no long lasting persistent AF patients were enrolled.

Antiarrhythmic drugs do not reduce the incidence of early AF recurrence after pulmonary vein isolation. SR maintenance during the blanking period seems to be a strong positive predictor of long-term success after ablation. Hypertension and persistent forms of AF are independent risk factors for late AF recurrence after PVI.