*The first 2 authors contributed equally to this study.

Renal function is known to be a causal reason of cardiovascular mortality and an independent predictor of a major complication of contemporary catheter ablation [1, 2]. Arrhythmia issues arise frequently in the renal disease population, spanning the spectrum from benign ectopy to sustained arrhythmias [3]. The presence of chronic kidney disease (CKD) increased the risk of atrial fibrillation (AF) recurrence after electrical cardioversion by catheter ablation [4, 5]. Multifactorial physiologic factors, due to CKD, may take part in higher prevalence of recurrent AF in patients with CKD than in those without it [4]. In this comprehensive meta-analysis and systematic review we sought to examine the current evidence and investigate whether the presence of CKD increases the risk of AF recurrence following single catheter ablation.

We performed this analysis according to the guidelines of the Meta-analysis of Observational Studies in Epidemiology Group (MOOSE) [6].

We included prospective or retrospective observational studies with a primary objective to analyze the association between CKD and recurrence of AF after catheter ablation. Titles and abstracts of all articles were evaluated and rejected following the inclusion criteria: 1) human subjects with AF; 2) renal function evaluated; 3) retrospective/prospective cohort studies; 4) baseline data available; 5) follow-up interval longer than 1 year; 6) AF recurrence following a single catheter ablation for CKD and non-CKD patients mentioned; 7) single catheter ablation for AF performed; 8) enough sample size (n > 100) of patients with and without CKD.

We carefully searched on-line database of PubMed until August 2012, and the Cochrane Controlled Trials Register Databases until August 2012 to identify relevant studies. We used the following key words: “atrial fibrillation”, “chronic kidney disease”, “catheter ablation”, “renal failure”, “renal function”, “renal insufficiency”, “end-stage renal disease” and “dialysis”. Titles and abstracts, as well as the reference lists of all the identified reports, were examined independently by 2 reviewers (ML and TL) in order to include potentially relevant studies. The 2 reviewers agreed on the inclusion/exclusion status in 90% of the reviewed studies. Disagreements were resolved by discussion or consensus of a third reviewer (GL). There was no language restriction when we included the studies. Additionally, a manual search was conducted using review articles on this topic, bibliographies of original papers, and abstracts of the scientific sessions of the American College of Cardiology, the American Heart Association, the European Society of Cardiology, and Heart Rhythm Society during the past 3 years.

To limit heterogeneity secondary to differences between study designs, the quality of each study was evaluated according to the guidelines developed by the United States Preventive Task Force [7] and the Evidence-Based Medicine Working Group [8]. A point score system was applied based on the quality of the study. The following characteristics were assessed: 1) clear description of inclusion and exclusion criteria; 2) study sample representative for mentioned population; 3) clear description of sample selection; 4) full specification of clinical and demographic variables; 5) follow-up interval longer than 1 year; 6) no loss of follow-up; 7) clear definition of CKD; 8) clear definition of outcomes and outcome assessment; 9) temporality (assessment of CKD done before catheter ablation); 10) adjustment of possible confounders in multivariate analysis. If a study did not clearly mention one of these key points, we considered that it had not been performed. Therefore, the possibility of underestimation of the reported characteristics may be present.

The magnitude of association between CKD and recurrence of AF following single catheter ablation was measured by adjusted hazard ratio (HR) or relative risk (RR) with 95% confidence intervals (CI). One study [9] gave a value of HR by univariate analysis. Two studies [4, 10] employed Cox proportional hazard models to draw a value of adjusted HRs. However, in one study [5] neither a value of HR nor adjusted HR is available. For the present analyses, we assumed RR to be a valid approximation of HR. Log HR was transformed by taking their logarithms and standard errors were calculated from Log HR and corresponding 95% CI. We used the inverse variance method to weigh studies for the combined overall statistic. Heterogeneity was examined using the standard χ2 test of heterogeneity. An I2 > 50% indicates at least moderate statistical heterogeneity [11]. If the χ2-test for heterogeneity was significant, a pooled effect was calculated with a random-effects model which was used to take into account within-study and between-study variance, otherwise, with a fixed-effects model. Sensitivity analysis was done by leaving out studies and checking the consistency of the overall effect estimate. Statistical significance for treatment effect was defined at p values < 0.05. We also performed subgroup analysis on two subsets of studies which all subjects had PAF or not. Publication bias was evaluated using funnel plot although relative small number of studies enrolled. All analyses were performed using Review Manager Version 5.1 (Revman; The Cochrane Collaboration, Oxford, UK).

A total of 1966 records were identified by the primary literature search. We identified 811 du- plicate articles which were discarded. How­ever, after screening the titles and abstracts, 1155 stu- dies were excluded because they were either la­boratory studies, review articles,or irrelevant to the current analysis. Of the 10 reports selected for detailed evaluation, 6 studies did not meet the in- clu­sion criteria and were excluded [1, 2, 12–15]. Among them, 4 [2, 12–14] did not mention AF recurrence after a single catheter ablation for CKD and non-CKD patients, 1 [1] baseline data unavailable and 1 [15] did not have enough sample size of patients with and without CKD. Consequently, 4 [4, 5, 9, 10] observational studies were finally included in our meta-analysis (Fig. 1). All of the 4 studies used retrospective data. There were overall 1379 patients involved in our analysis. The follow-up period ranged from 12 and 56 months. The characteristics of included studies are depicted in Table 1. The baseline data of the patients in each study are presented in Table 2. The definitions of CKD varied: 4 studies used reduced estimated glomerular filtration rate (eGFR) assessed by the MDRD formula [16] or the Cockcroft-Gault formula.

Table 2. Baseline data of patients included in the meta-analysis. 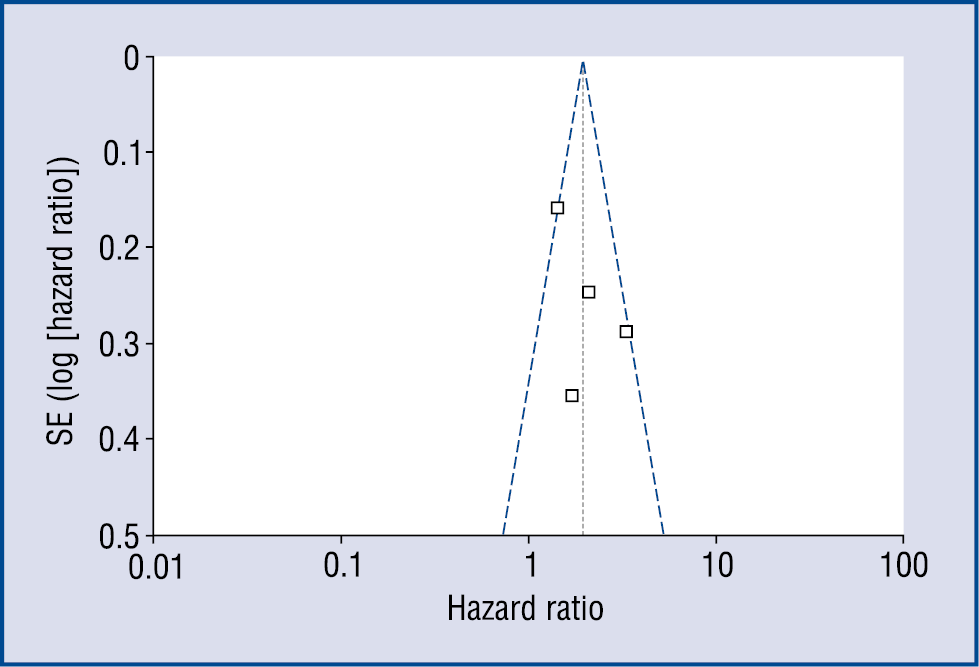 In this comprehensive meta-analysis, we showed that patients with CKD were associated with increased rate of AF recurrence following single catheter ablation. The prevalence of AF is much greater among persons with end-stage renal disease than among the general population [17]. Recent studies indicated that CKD and a decreased GFR was associated with high recurrence rate of catheter ablation in patients with PAF [4, 5, 9]. Another study clearly demonstrated that the outcome after 1st catheter ablation of AF is poor in patients with impaired renal function [10]. A significant elevation in AF risk was observed at a threshold eGFR of < 60 mL/min/1.73 m2 [18].

Cardiorenal syndrome leads to higher numbers of individuals suffering from bidirectional disorder [19]. Regardless of severity, CKD is associated with an increased prevalence of AF among US adults [20]. In a large population-based study, reduced kidney function was strongly associated with the incidence of AF independently of other risk factors [21]. Elimination of AF by catheter ablation improved kidney function in patients with mild to moderate kidney dysfunction [1].

Several pathophysiologic mechanisms have been proposed as being responsible for the association between CKD and AF. CKD may cause cardiac and atrial structural changes which are responsible for the increased incidence of cardiac arrhythmias [22]. Metabolic abnormalities such as metabolic acidosis, dyskaliemia and dyscalcemia can also lead to an increased risk of AF [23]. Accumulated evidence suggests oxidative stress may play an important role in the pathogenesis and perpetuation of AF [24, 25]. Indices of oxidative stress are increased with severity of kidney disease and correlates significantly with level of renal function [26]. For example, in the left atrium, expressions of nicotinamide adenine dinucleotide phosphate oxidase and malondialdehyde were increased by CKD [27].

Meta-analyses of observational studies present particular challenges because of inherent biases and differences in study designs. This meta-analysis is limited because number of included studies is low and sample size is small. The results of all 4 studies are positive which may indicate a significant publication bias. Moreover, the present study was a meta-analysis of observational studies only. Because of the nature of the hypothesis, it is only possible for studies to be designed in this manner. Therefore, our analysis has demonstrated an association but not causality and is hypothesis generating. We used eGFR < 60 mL/min/1.73 m2 as a diagnostic standard for CKD, but this is not the reference standard for diagnosing CKD and has its limitations. However, this did not alter the overall result. The study by Tokuda et al. [9] only gave univariate HR value and we manually calculated HR value of the study by Chao et al. [5]. Similar to other meta-analyses, because of the lack of data from the included studies, we were unable to adjust risk factors by multivariate regression. The study by Berkowitsch et al. [10] enrolled the largest number of patients, with a weight of 34.3% in our pooled result. It had the greatest influence on our findings. Therefore, our meta-analysis was subject to that study’s inherent limitations.

In conclusion, CKD was associated with higher AF recurrence rate after single catheter ablation. Given that the CKD prevalence is rapidly increasing, there is an imperative need for better risk stratification of catheter ablation candidates.

Conflicts of interest: none declared