It is well known that during early natal period cardiomyocytes normally stop increasing in number (hyperplasia of the fetal period) and that the further increase in heart size is due to cellular hypertrophy [1]. However, despite the fact that the number of cardiac myocytes is genetically determined and reaches a final amount within the first year after birth [2], the possibility of cardiac self-renewal has been re-examined over the years [3–5].

Even though left ventricular mass (LVM) is larger in adult men than in adult women [7] — similar to what has been reported in adult rats [8] — this difference was not detected when female and male children or weaning female and male rats [9, 10] were studied.

This divergence in the left ventricular (LV) weight in adult humans and/or rats might be due to sex differences in myocardial mass (and hence the number of myocytes) that was programmed in early life and/or different cardiac growth with certain level of myocyte hypertrophy during development in males.

On this basis, the current clinical and experimental observations performed in humans and rats tested the hypothesis that the aging process may have distinct impact on the LVF and structure, being able to develop non-adaptative mechanisms depending on gender.

Experiments were conducted in accordance with the Guide for the care and use of laboratory animals (NIH publication Nº 85-23, revised 1966) with normotensive rats of both sexes from the Wistar strains rats. Ten 1-month-old (5 males) and ten 6-month-old (5 males) rats were used in order to have pre-puberal and adult animal samples. All animals were fed ad libitum and had free access to tap drinking water.

Arterial systolic blood pressure (BP) was weekly determined by the tail-cuff method in each animal. Rats were lightly anesthetized (35 mg/kg pentobarbital sodium, IP) to perform 2-dimensional targeted M-mode tracings according to established recommendations [13]. Measurements were made using criteria analogous to those recommended by the American Society of Echocardiography for using in humans in 3 consecutive cardiac cycles. All tracings were analyzed with an off-line analysis system (Image pro Plus 6.0). LVM was calculated according to Devereaux and Reichek [14], and LVM index (LVMI) was obtained normalizing LVM to tibial length. Relative diastolic wall thickness was calculated as posterior wall thickness/LV end-diastolic radius [15].

Animals were euthanized under anesthesia and their hearts were removed to weigh the LV. LV weight was divided by tibial length to determine the LVMI. In 2 rats out of each group ventricular tissue was fixed in buffered 10% formaldehyde and paraffin embedded to stain with picrosirius red for determining collagen volume fraction as previously described [17]. Perivascular collagen was excluded from this measurement.

In the other rats of each group, cardiac myo­cytes were isolated as previously described [18] in order to measure the cell apparent surface area via the detection of the edges with the Image Pro Plus software. The area of 200 myocytes per rat heart was measured.

The studied population consisted of 96 normotensive subjects, 6 to 24 years of age, without antecedents of cardiovascular diseases, obesity and with normal echocardiograms. This cohort was divided into 2 groups: 46 pre-adolescents, Tanner stage III [19], 6 to 12 years old (21 girls, 25 boys); and 50 young of 18 to 24 years of age (25 women, 25 men).

The weight and height data were obtained in each included subject in order to calculate the body surface area (BSA) [22]; an echocardiogram was performed following the recommendations of the American Society of Echocardiography [23], using commercially available equipment provided with 2–4 MHz or 5–7 MHz phased–array transducers. LVMI was calculated by normalizing LVM to BSA. Other parameters employed to evaluate the LV structure and function were obtained as explained above for the experimental observations.

Data are reported as mean ± standard error. The 2-tailed t-test for independent samples was used for comparing differences between genders in continuous variables. 2-way ANOVA test followed by ad-hoc correction were used for multiple comparisons (males vs. females within the same age range, but also young vs. adult within the same gender). The statistical analyses of the different variables were performed with the Statistical Package for Social Science (SPSS, Chicago, Ill) version 15.0. Statistical significance was assumed for 2-tailed p < 0.05. When the analysis was performed in 6-month-old rats (Table 2), we found that male rats had higher body weight and tibial length. It is interesting to note that BP was higher in these rats (male and female) than in rats of 1 month of age.

Myocyte size and LVMI were higher in male than female rats at this age (Fig. 3); however, collagen volume and LV systolic function were similar in both genders (Fig. 4). This finding allows us to speculate that the increase in the myocardial cells size without associated interstitial fibrosis, at least up to this age, may correspond with a physiological adaptation to growth despite the higher BP. 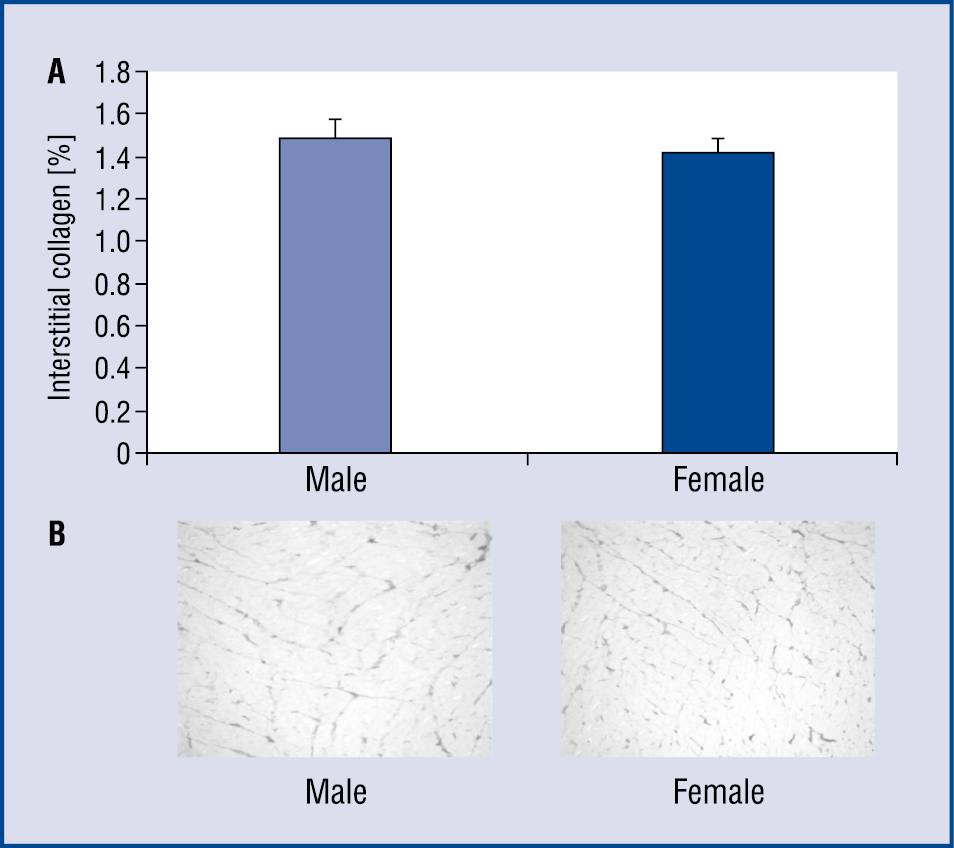 Mean age, BSA, arterial BP, and echocardiographic structural and functional parameters of boys and girls were similar (Table 3). However, in young population we found differences between sexes, since the weight, height, BSA and arterial BP were higher in men than in women (Table 4). Structural parameters of LV diameter and wall thickness were also higher in men (Table 4). Relative wall thickness was similar in men and women. Young men presented approximately 44 g more LVM than young women in correspondence with higher LVMI, as shown in Figure 5. It is interesting to point out that LV systolic function indexes were higher in woman than in men, as observed in the same figure (Fig. 5). Since cardiomyocytes represent the largest percentage of heart volume (≈ 60%) and, as a consequence, have the major impact on determining LVM, similar LVM in different population might mean similar cardiomyocyte number and/or size. Our results showing similar myocyte size in 1-month-old rats allow us to confirm that assumption. Considering that the number of cardiac myocytes is genetically determined and might reach a final amount early in development, we could speculate that the final number of cells could be different depending on gender. However, since we observed the same size in cardiomyocytes and LVM in female and male young rats, this possibility could be dismissed.

The results of our clinical observations in children are in agreement with our experimental observations, showing similar LVM in boys and girls, allowing us to extend the previous considerations.

In coincidence to other authors [24–28], we found that LVM in adult rats and human beings was higher in males than in females. Consistently, Campbell et al. [27] also showed that all measured cellular dimensions of cardiomyocytes isolated from adult rats were significantly smaller in females compared to males. In addition, we did not find differences in the collagen percentage between sexes. This last evidence would allow us to discard the assumption that the higher LVM in these animals could represent a phenotype of pathological hypertrophy. The different size of the myocytes that explain the differences found in LVM between genders can be the consequence of different responses to similar stimuli in male cells or to dissimilar overload signals depending on sex (i.e. arterial BP, BSA, stroke work or the presence of specific hormones with different effect in myocyte growth).

Another factor worth-mentioning is the possibility that not only the size but also the number of cardiomyocytes could be differently contributing to the increase of LVM in males in comparison to females. On the other hand, it should be considered that the smaller size of the myocytes found in older female rats could be associated to greater apoptosis, thus contributing to explain the minor LVM detected. However, Olivetti et al. [28] studying the size and number of cardiomyocytes in 53 women and 53 men observed a larger reduction in the number of the cells in men, with the increment of the volume associated to an enlargement of LVM according to the increasing age. These pieces of evidence suggest that the interrelation between size and number of myocytes during life time would explain the differences in LVM according to gender.

Our results obtained in human beings are in agreement with investigations that have documented differences in systolic LVF according to gender in favor of women [29, 30]. Several mechanisms were considered to explain this phenomenon, as enhancement of calcium influx into cardiomyo­cyte secondary to the increase in the density of sarcolemmal calcium channels in women [29] or augmentation of the activity of the actomyosin ATP-ase with a rise in calcium sensitivity of contractile proteins, depending on estrogen levels [30]. On the other hand, the results of our experimental observations, which are in agreement with the study of Weinberg et al. [31], demonstrate that LVF was similar in rats of both genders. These data suggest that in contrast to humans estrogen levels might not have impact on the LVF of rats.

Considering that the relation between the number and size of cardiomyocytes would allow us to explain the difference in LVM between genders, the main limitation of the study was the inability to obtain the number of cells in the experimental observations. This limitation was based on the difficulty of having a reliable methodology to accomplish that task. On the other hand, in clinical observations, the impossibility to obtain myocardial biopsies obliged us to extrapolate to the experimental findings to interpret the results.

In summary, the main results of this study evidence an obvious age influence on the LVM according to sex, both in rats and humans. Young rats and children show similar LVM in both sexes, whereas in older population LVM is greater in males than in females. The lack of development of fibrosis with increase in the size of myocytes and LVM in male rats, as well as the lack of alteration in LV systolic function, would suggest a process of adaptation or physiological response. However, although normal healthy adult men display a LVF that fully satisfies the perfusion demands of the body, the increase in cardiac mass without an associated improved cardiac function in men in comparison to women could likely represent a potential disadvantage in the adaptive response during growth. Thus, it is feasible to speculate that this phenomenon could partly explain the higher prevalence of cardiovascular disease in men than in pre-menopausic women. Further studies are needed to bring new insights into this matter.