Despite therapeutic advances, heart failure (HF) is a disabling disease with poor prognosis [1]. Beta-blockers are cornerstone agents in HF therapy because they prevent the deleterious effects of activation of sympathetic nervous system [1, 2]. Diastolic abnormalities of the left ventricle (LV) are important determinants for exercise intolerance in HF patients [3, 4].

Carvedilol and nebiovolol are new-generation agents with favourable vasodilator and/or antioxidant properties, and they are used for chronic HF treatment [1, 5, 6]. They can reverse cardiac remodeling resulting from sympathetic overactivation in HF patients [7–11]. Moreover, they improve symptoms and survival in HF patients [9, 11–14]. However, there is uncertainity whether their fovarable effects will similarly produce clinical benefit, and carvediolol may be preferred to nebivolol in HF patients [15].

On the other hand, 3 previous studies compared the effects of these 2 agents on LV functions in HF patients [9–11]. They have provided divergent results about LV diastolic functions at 6- to 24-month follow-up. In addition, transmitral to mitral annular early diastolic velocity ratio (E/Ea), a sensitive marker for high diastolic filling pressure [16] has not been evaluated in those studies. Thus, we aimed to compare the effects of carvedilol and nebivolol on LV diastolic functions and N-terminal pro-B-type natriuretic peptide (NT-proBNP) level in non-ischemic HF patients with reduced systolic function.

This study included 68 consecutive patients with moderate or severe symtomatic HF (New York Heart Association [NYHA] class II to III) who had angiographically normal coronary arteries. However, 7 patients were excluded from the study because of recent atrial fibrillation (n = 2), beta-blocker intolerance (n = 2), NYHA class IV HF at the time of randomization (n = 1) and refusal to repeat examinations (n = 2). Finally, the remaining 61 patients were randomly assigned to receive carvedilol (n = 31) or nebivolol (n = 30) in a single-blind and open-label fashion. They had LV ejection fraction (EF) ≤ 40% in previous 3 months. The patients who had the following features were not considered for inclusion into this study at the beginning. These features were HF with significant coronary stenosis, history of myocardial infarction, moderate or severe valvular heart disease, rest heart rate < 60 bpm, systolic blood pressure (SBP) < 100 mm Hg, history of asthma or use of bronchodilators, hypo- or hyperthyroidism, hepatic or renal failure (serum creatinin > 2.0 mg/dL), rhythm disturbances including second or third degree heart block, sick sinus syndrome, atrial fibrillation, and complete bundle branch block.

In patients who were on beta-blocker therapy before the study, beta-blocker therapy was stopped at least 1 week for drug elimination. Thereafter, carvedilol was started at 3.125 mg twice daily and then up-titrated to 6.25, 12.5 and 25 mg (target dose) twice a day at 3 to 5-day intervals if the previous dose was tolerated. Similarly, ne­bivolol was given at 1.25 mg once a day and then up-titrated to 2.5, 5 and 10 mg (target dose) once a day if the previous dose was tolerated. When the up-titration dose was not tolerated, the previous tolerable dose was considered maximum tolerable dose for each agent. The patient’s tolerance was evaluated according to the following criteria; resting heart rate > 55 bpm, SBP ≥ 100 mm Hg, no drop in SBP < 30 mm Hg on standing position, no new symptoms of dizziness, or dyspnea. After the target or maximum tolerable dose, patients were evaluated in an out-patient clinic at 1st, 3rd and 6th month. Complete blood count, biochemical analysis and echocardiographic measurements were made in patients at baseline, 3 and 6 months after target dose. Heart rate, BP and body weight were recored at each visit. Also, functional status of patients was assessed according to NYHA. Other medications were prescribed according to current chronic HF guideline [1]. All patients received angiotensin-converting enzyme inhibitor (ACEI, lisinopiril) and diuretics in appropriate doses. Candesartan, angiotensin receptor blockers (ARB) were given when ACEI intolerance occured.

Echocardiographic examinations were performed by the same investigator (MK) who blinded to the patients’ data at baseline, 3 and 6 months. Measurements were acquired at the end of expiration during normal breathing in the left lateral decubitus position. Two-dimensional, M-mode, and Doppler echocardiographic measurements were obtained according to the recommendations of the American Society of Echocardiography with System 5 Echocardiography Machine (GE Vingmed Ultrasound) with a 2.5 MHz transducer [17]. The mean of 3 cardiac cycles with ECG record was evaluated for measurements. The left atrial size, LV diameters and wall thickness were measured by using M-mode echocardiography. LVEF was calculated by Simpson’s method.

Pulsed Doppler tissue images were obtained from the apical 4-chamber view with minimum frame rates of 100/s. At least 3 consecutive traces of septal and lateral segments of mitral annulus were recorded. Their peak early (Ea-wave) and late diastolic velocity (Aa-wave) were measured and the Ea/Aa ratio was estimated. The average of septal and lateral annular velocities was calculated and considered the ﬁnal mitral annular velocity. Therafter, E/Ea ratio was calculated. With some measurements, intraobserver variabilities were 5.2%, 7.2% and 3.8% for EF, IVRT and E/Ea, respectively.

The study was approved by the institutional ethics committee and informed consent was obtained from each patient.

All analyses were performed with commercially available statistical program (SPSS Version 13.0, SPSS Inc., Chicago, IL). Continous variables were presented as mean ± standard deviation and categoric ones as percentage (%). The two study groups were compared using Student-t test or Mann-Whitney U and χ2 or Fisher exact test as appropriate. In each group, follow-up comparisons (baseline and 6 months) were performed by using Paired t-test and Wilcoxon ranked tests as appropriate. A 2-tailed p value of < 0.05 was considered statistically significant.

Baseline demographic and clinical features except the use of aspirine were comparable in carvedilol and nebiovolol groups (Table 1). Laboratory tests and initial echocardiographic measurements were also similar in the two groups (Tables 1, 2). Target dose of study drugs was reached in 42% and 47% of patients in carvedilol and nebivolol groups, respectively (p = 0.85).

Table 3. Temporal changes in clinical and echocardiographic variables at 3 and 6 months. 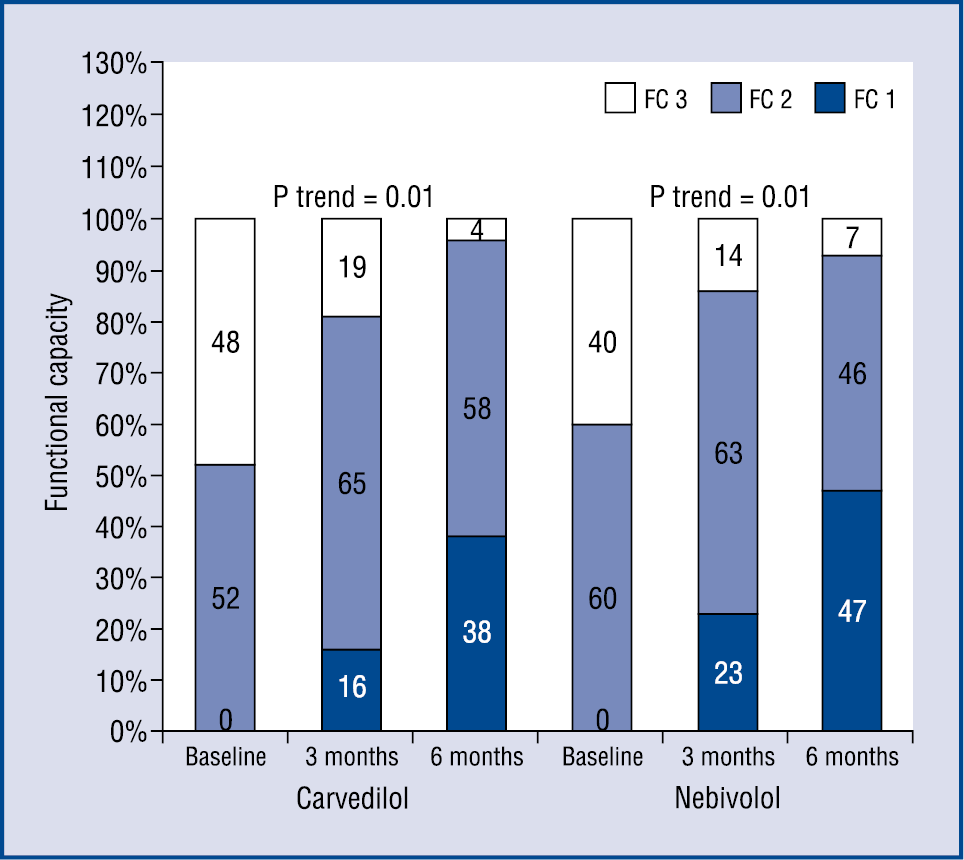 Figure 1. Functional capacity in carvedilol and nebivolol groups and its temporal changes with therapy. Although it significantly improved in each group, there was no significant difference between the two groups at 3 and 6 months (p > 0.05); FC — functional capacity.

The LV diameters and EF significantly improved in each group at 6 months (Table 3). Compared with the carvedilol group, EF was slightly higher in the nebivolol group due to bigger reduction of LV systolic diameter at 3 months, but it was similar in the two groups at 6 months.

In each group, mitral E velocity and E/A ratio significantly decreased (each p = 0.01) while A velocity remained unchanged (Table 3). However, these reductions were similar in both groups. Similarly, DT and IVRT significantly improved in each therapy group (each p < 0.05). However, these improvements were also comparable in the two groups at 3 and 6 months (Table 3). Mitral Ea/Aa ratio did not differ in the two groups, although Aa velocity was lower in the carvedilol group than in the nebivolol group (p = 0.04). On the other hand, E/Ea ratio significantly decreased in each group (p = 0.01), but it was lower in the nebivolol group than in the carvedilol group at 6 months (10.2 ± 2 vs. 11.8 ± 2, p < 0.01).

During 6 months, median NT-proBNP levels were significantly reduced with carvediolol or nebivolol therapy (p < 0.001, Table 3). However, this reduction was comparable in the two groups at 3 and 6 months.

At follow-up, there was no death, hospitalization for HF or discontinuation of study drugs for adverse effects. Drugs were well tolerated.

In the present study, mitral E/A ratio and IVRT similarly decreased in nonischemic HF patients who were treated with carvediolol or nebivolol at 6 months while DT similarly prolonged. Also, E/Ea ratio significantly decreased in each therapy group.

Clinical data have showed that carvedilol and nebivolol have beneﬁcial effects on clinical outcomes, such as symptoms, exercise capacity and prognosis in HF patients with reduced EF [9, 11–14]. These useful effects are frequently attributed to the elevated LVEF due to reduction in LV volumes [8, 9, 11–14].

Despite a low diagnostic value, mitral E/A ratio is commonly used for LV diastolic function in practice. Carvedilol [7, 9, 10, 18, 20, 22–24] and nebivolol [8–10, 19, 25, 26] have been reported to have different effects on mitral E wave velocity and E/A ratio in previous studies. In our study, mitral E/A ratio was similarly reduced with carvedilol or nebivolol therapy due to reduction of mitral E wave velocity. This finding is in accordance with the results from previous studies [10, 18–20, 22]. In contrast, Patrianakos et al. [9] have reported that mitral E/A ratio was significantly decreased with nebivolol treatment in nonischemic HF patients at 12-month follow-up, but not with carvedilol therapy.

We observed a significant improvement in DT and IVRT variables with carvediolol or nebivolol therapy, but there was no difference between the two therapy groups. Patrianakos et al. [9] have showed that DT was similarly prolonged with both study drugs, with earlier improvement with carvedilol. A 12-month nebivolol therapy resulted in a trend toward reduction in mitral E/A ratio and prolongation in DT in elderly HF patients in echocardiographic substudy of SENIORS study [8]. These useful effects may be due to vasodilatory action of both agents.

E/Ea ratio is a reliable marker for LV diastolic function and well correlated with LV filling pressures [16]. Its value of > 15 presents high LV filling pressure and has predictive value for cardiac events in patients with LV dysfunction [16, 27]. To our knowledge, there is no data about the comparative effects of carvediolol and nebivolol on E/Ea ratio in HF patients. In our study, both agents significantly reduced the E/Ea ratio during 6 months. Although E/Ea ratio was lower in nebivolol group than in the carvedilol group at 6 months, this difference will not provide any clinical benefit since both values are in range of 8 to 15. In another study, carvedilol has decreased E/Ea ratio significantly in patients with dilated cardiomyopathy secondary to muscular dystrophy [23].

Owing to the improvement in LV hemodynamics, beta-blocker therapy with an ACEI or ARB is likely to reduce NT-proBNP levels over time, but previous results are divergent [10, 28–30]. These results might be due to small sample size, variable follow-up time and differences between study populations. Both carvedilol and nebivolol therapy similarly reduced NT-proBNP levels in our study at 3 and 6 months but there was no difference in neither therapy group. However, Lombardo et al. [10] have reported no reduction in NT-proBNP levels in carvediolol and nebivolol groups at 6-month follow-up.

In parallel to echocardiographic and neurohormonal improvement, we observed that both study drugs to a similar extent significantly improved functional capacity, heart rate and BP. These findings are concordant with the results from previous studies [7, 9–14, 18–20, 22, 23, 25].

There are several limitations to our study. Firstly, the small size of our study limits the statistical power since we applied strict non-inclusion criteria for the study. Secondly, we evaluated clinically the functional capacity of patients instead of exercise test or 6-minute walking distance. Also, we did not use the life-quality scoring systems. Thirdly, we would measure left atrial volume instead of its diameter. Finally, our findings reflect the situation only in patients with non-ischemic HF. It may be possible that carvedilol and nebivolol might have different effects on LV diastolic function in ischemic HF patients.

Our findings show that carvedilol and nebivolol have similar effects on LV diastolic functions and NT-proBNP levels in non-ischemic HF patients with reduced EF.