Mitral stenosis (MS) is still the most common complication of acute rheumatic fever in Turkey. Carditis affects not only cardiac valves but also myocardium. Conventional echocardiographic methods give valuable information about valvular involvement and function but they are not enough for the evaluation of myocardial involvement. In previous studies the authors showed that patients with MS had significantly impaired long-axis function evaluated by M-mode or tissue Doppler echocardiography despite normal global systolic function [1–3].

In this study, we aimed to evaluate the subclinical left ventricular (LV) systolic dysfunction and contraction of short and long axial circumferential and longitudinal fibers by pulsed wave tissue Doppler in rheumatic MS patients who preserved LV systolic function in 2D echocardiography.

The characteristic of the study

Thirty-five patients who had moderate to severe rheumatic MS hospitalized for mitral balloon valvuloplasty in Turkiye Yuksek Ihtisas Education and Research Hospital between September 2010 and January 2011 were included as the study group. Fifteen patients who had normal echocardiogra­phic findings and similar characteristics with study group were selected as the control group. All participants were informed about the study and their consents were obtained.

Exclusion criteria are given below:

All patients underwent transthoracic echocardiographic examination by Vivid pro 7 (GE Horten, Norway) echocardiography device with a 1.5–3.6 MHz transducer. All echocardiographic examinations were performed by the same operator who was blinded for groups of the patients. LV systolic diameter (LVSD) and LV diastolic diameter (LVDD), left atrium diameters and mitral valve area (MVA) with pressure half time and planimetric methods were noted. LV ejection fraction (LVEF) with biplane area method from apical window and fractional shortening (FS) with M-mode echocardiography according to the formula: FS (%) = ([LVDD – LVSD] / LVDD × 100) were calculated.

LV myocardial systolic velocities were examined with pulsed wave tissue Doppler (PWTD) in the short and long axis with simultaneous electrocardiographic (ECG) monitoring. Apical and parasternal windows were used for PWTD echocardiography. To measure velocities along the short axis, the sample volume was positioned on the mid-portion of the middle region of the posterior LV wall on a parasternal long-axis view and velocities along the long axis were measured by putting the sample volume in the subendocardial portion of the middle region of the posterior LV wall on an apical long-axis view. Each PWTD measurement revealed two peak systolic velocities (SW1 — first systolic velocity peak; SW2 — second systolic velocity peak). Also, the durations from Q wave in ECG to SW1 and SW2 were noted respectively as Q-SW1 and Q-SW2 (Fig. 1). The average of 3 cycles was calculated. 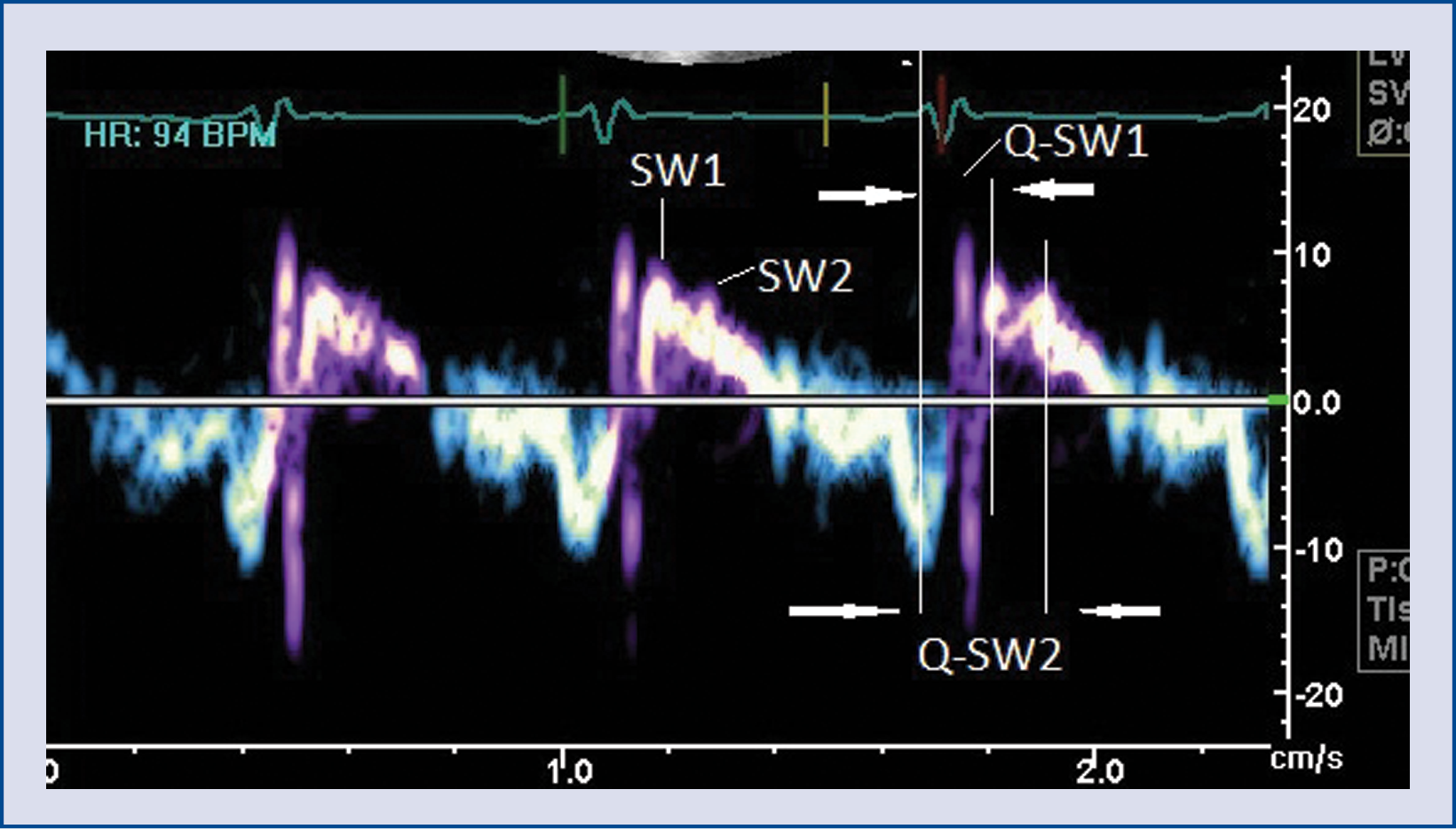 All data were evaluated by the SPSS (Statistical for Social Sciences for Windows, version 17.0). Parametric and nonparametric distribution of the variables was assessed by Kolmogorov-Smirnov test. Parametric data were expressed as mean ± standard deviation and qualitative data as numbers and percentages. Pearson test was used for correlation analysis of the parametric data. One-way ANOVA test was used for the comparison of the quantitative data between the groups. The results were considered statistically significant at the level of p < 0.05.

Fifty patients included in the study were divided into 3 groups according to severity of MS as normal mitral valve, mild-moderate MS (MVA > 1.1 cm2) and severe MS (MVA ≤ 1.1 cm2).

Table 1. Characteristic features of the patients.

Histological studies showed that LV myocardium was composed of circumferential fiber in the middle portion, longitudinal fibers in subendocardial and subepicardial portions [4, 5]. LV systolic function is accomplished by contraction of both fibers [6]. Longitudinal fibers contract earlier in early systole and LV takes a shape of a sphere during isovolumetric contraction phase [7–9]. Immediately after this, circumferential fibers contract and LVEF is completed [10, 11].

In previous studies, contraction of circumferential and longitudinal fibers was investigated with conventional M-mode echocardiography [12]. With the help of new modalities, myocardial tissue velocities could be noninvasively measured [13, 14]. It would be possible to get valuable information about LV short and long axial myocardial functions with tissue Doppler echocardiography [15–19].

When we look at the earliest studies, in 1953, Grant [23] in his article suggested that part of the LV was atrophic in patients with MS. He found that the posterior wall of the LV in patients with MS was shortened and atrophic. These ventricular changes were explained to be due to partial immobilization of the ventricle by the fibrotic posterior mitral leaflet and also to the chronic ventricular inactivity resulting from long-standing reduced ventricular filling. In 1968, Feigenbaum et al. [24] showed that significant increase in LV end diastolic pressure occurred despite increase in MVA in patients with MS who had had mitral valvulotomy.

The concept of ventricular atrophy would also explain this increase in LV end diastolic pressure because of abnormal compliance of the LV. We can also derive from these studies that chronic volume underload of the LV due to mitral valve stenosis over years and decades may be responsible for LV systolic dysfunction.

Lee et al. [25] demonstrated that MS patients with reduced global LV function usually had segmental contraction abnormalities. In their study, they also showed that most of MS patients who had impaired EF gained improvement in LV function after mitral valvuloplasty, while some did not. They concluded that both myocardial and mechanical factors would be responsible for LV dysfunction in patients with MS [25].

Acute rheumatic carditis affects not only cardiac valves but also myocardial tissue. In our study, we evaluated the subclinical LV systolic dysfunction and contraction of short and long axial circumferential and longitudinal fibers by PWTD in rheumatic MS patients who preserved LV systolic function in 2D echocardiography. Contraction of longitudinal fibers in isovolumetric contraction phase is impaired in MS patients compared to normal healthy subjects as a result mean longitudinal axis SW1 velocity decrease and this decrease is correlated with the severity of MS (p < 0.001). Moreover, the time required for stimulation of longitudinal fibers increases and this increase is correlated with the severity of MS (p = 0.01). As a result, while LV functions are normal with conventional 2D echocardiography in MS, subclinical systolic dysfunction is present and there is also a dyssynchrony between circumferential and longitudinal myofibrils.

In their study, Ozdemir et al. [20] showed the myocardial velocities of the LV indicating LV function were found to be significantly lower in patients with pure MS. In the study performed by Ozer at al. [21] it was showed that patients with MS had significantly impaired long-axis function evaluated by M-mode or tissue Doppler echocardiography despite normal global systolic function.

In their study, Arat et al. [26] found that myo­cardial S and E velocities and the E/A ratio were increased after percutaneous mitral valve balloon valvotomy with no significant change in the LVEF and the total ejection isovolume index which is more reflective of overall cardiac function than systolic or diastolic functions alone. They emphasized that a subclinical LV dysfunction might be responsible for no significant change in LVEF.

Inflammation and edema due to acute rheumatic fever resulting in fusion, thickening and shortening of mitral and subvalvular apparatus also affects anatomical and contractile features of myofibrils [27–29]. In their ultrastructural study, Lee at al. [25] showed intense myofibril loss due to both myofibril degeneration and impaired mitochondria to myofibril ratio in pure rheumatic MS patients. As a result they specified that the main pathological mechanism responsible for LV function disturbance was myocardial involvement due to rheumatic process in rheumatic pure MS [30]. Colle et al. [31] revealed that rheumatic MS patients had anterior and posterior hypokinesia and mean shortening of hypokinetic segments was lower in MS patients than in normal individuals. They also showed that patients who had contractile abnormality had lower EF and circumferential myofibril shortening velocity.

In our study, we showed that mild-moderate and severe MS patients had significantly lower myocardial systolic velocity which was a marker of quantitative contractile function than normal subjects despite the fact that they had similar EF values. We still do not exactly know that which factors are more important (myocardial, mechanical or both) in case of LV dysfunction in MS patients. However, we exactly know that LV functions are not preserved and at least a subclinical LV dysfunction exists in pure MS.