Cardiovascular disease (CVD) remains the leading cause of death in the developed world. Atherosclerosis, the principal cause of myocardial infarction (MI) and cerebral infarction, accounts for the majority of these deaths. The pathogenesis of atherosclerosis has not yet been well elucidated. Experimental evidence points to the involvement of multiple factors in plaque formation, including vitamin D.

Vitamin D has potential ameliorating effects on the development of atherosclerosis by several mechanisms, but the molecular mechanisms of this association remain not completely understood. Serum levels of vitamin D seem to be inversely associated with the extent of vascular calcifications, which are frequently found in patients with CVD. Vitamin could protect against atherosclerosis and vascular calcification by its inhibiting effect on vascular smooth muscle cells proliferation. It directly or indirectly regulates the expression of a number of proteins relevant to the arterial wall, such as vascular endothelial growth factor, matrix metalloproteinase type 9, elastin, and type I collagen. Probably, vitamin D has also an impact on the cardiovascular system by exerting anticoagulant and antifibrotic activity [12], thereby preventing thrombosis.

Accumulated evidence indicates that atherosclerosis is an autoimmune disease [13]. Vitamin D could also be associated with CVD by down-regulating pro-inflammatory cytokines (tumor necrosis factor [TNF-α] and interleukin [IL-6]) and up-regulating anti-inflammatory cytokines (IL-10) [14–16]. The study revealed that a reduction in atherosclerotic lesion formation resulted from the suppression of immune reactions, with at least 2 cell types crucially involved in vitamin D3 effects (regulatory T cells and dendritic cells) [17]. Because hypovitaminosis D is easily correctable, establishing the relationship between vitamin D and the risk of atherosclerosis is very important.

Little is known, however, about the association of vitamin D with the intensity of atherosclerosis. A few studies have focused on this problem in patients with acute coronary syndrome. The aim of the this study was therefore to determine both the vitamin D level and its association with the extent of coronary stenotic lesions in patients with acute MI.

The study involved a group of 130 consecutive patients, Caucasian in origin, aged > 18 years, and admitted to our hospital due to the first acute ST-segment elevation MI (STEMI) treated with primary percutaneous coronary intervention (pPCI). STEMI was the first symptom of coronary artery disease (CAD). The study was performed within 2 years (2010–2011) during summer (June, July) and winter (November, December) months when there is the highest and lowest sun exposure.

Baseline characteristics were obtained for all patients. We recorded demographic information, cardiovascular history, risk factors (hypercholesterolemia, smoking, hypertension and diabetes mellitus), and prior embolic events. Acute STEMI was defined according to consensus documents of the American College of Cardiology and the European Society of Cardiology [18]. Within 90 min of admission, all patients had coronary angiography with subsequent pPCI performed. Standard concomitant therapy (aspirin, thienopyridines, beta-blockers, ACE-inhibitors, statins) was administered in all eligible patients.

The angiographic severity of CAD was determined based on the Gensini score [19]. The Gensini score was calculated for each patient from the coronary arteriogram by assigning a severity score to each coronary stenosis according to the degree of luminal narrowing and its geographic importance. Reduction in the lumen diameter, and the roentgenographic appearance of concentric lesions and eccentric plaques were evaluated (reductions of 25%, 50%, 75%, 90%, 99%, and complete occlusion were given Gensini scores of 1, 2, 4, 8, 16, and 32, respectively). Each principal vascular segment was assigned a multiplier in accordance with the functional significance of the myocardial area supplied by that segment: the left main coronary artery × 5; the proximal segment of left anterior descending coronary artery (LAD) × 2.5; the proximal segment of the circumflex artery × 2.5; the mid-segment of the LAD × 1.5; the right coronary artery, the distal segment of the LAD, the posterolateral artery and the obtuse marginal artery × 1; and others × 0.5.

Serum concentrations of 25-hydroxyvitamin D [25(OH)D] were measured in the research laboratory using a electrochemiluminescence immunoassay method (ECLIA Roche diagnostics, Mannheim, Germany). Blood samples were obtained by venipuncture in the morning the day after coronary angiography and placed into tubes that were protected from sunlight. Serum was separated and stored at –70°C within 30 min of collection. Participants were classified into clinically-relevant categories on the basis of 25(OH)D levels. Patients with levels ≥ 30 ng/mL were classified as normal, while levels > 20 ng/mL and < 30 ng/mL were considered insufficient. Levels of > 10 ng/mL to ≤ 20 ng/mL were deficient, and levels ≤ 10 ng/mL were severely deficient, according to current clinical guidelines [20].

Continuous variables were summarized by median values with corresponding 25th and 75th percentiles (Q25 and Q75). Discrete variables were summarized in terms of frequencies and percentages. Comparisons between groups were made using the Whitney-Mann test and Pearson’s χ2 analysis for continuous and categorical variables, respectively. Correlations between continuous variables were determined by Spearman’s correlation coefficients. Multiple logistic regression analysis was used to identify independent predictors of multi-vessel CAD. P-value of < 0.05 was considered statistically significant. All analyses were performed using Statistica 10.0 (StatSoft Inc., USA).

Clinical and biochemical characteristics of the group are shown in Table 1. 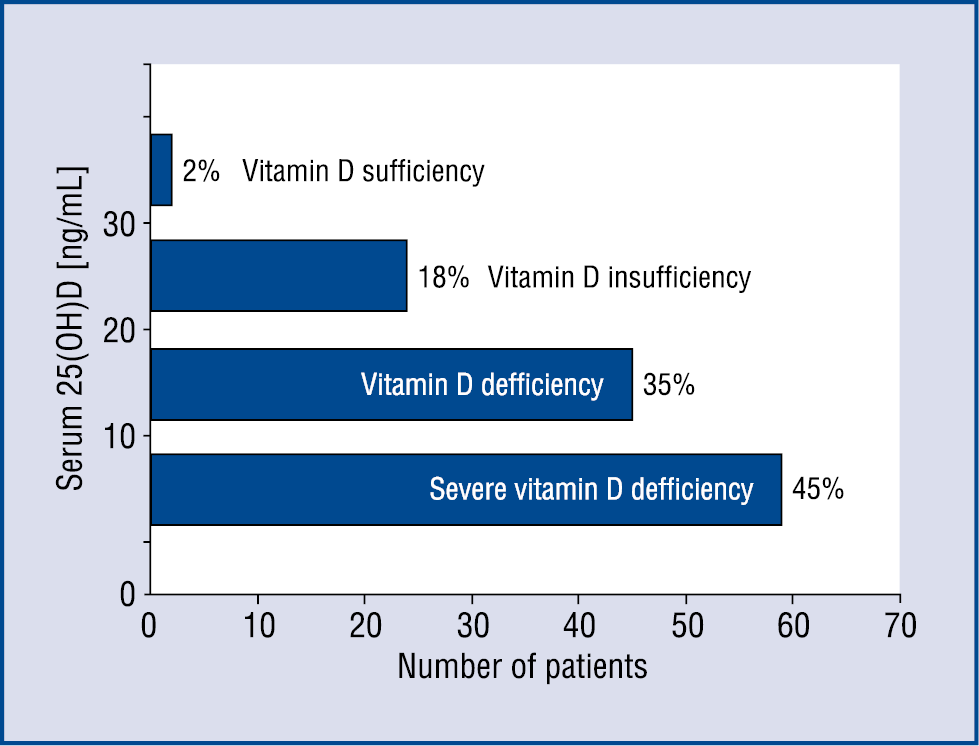 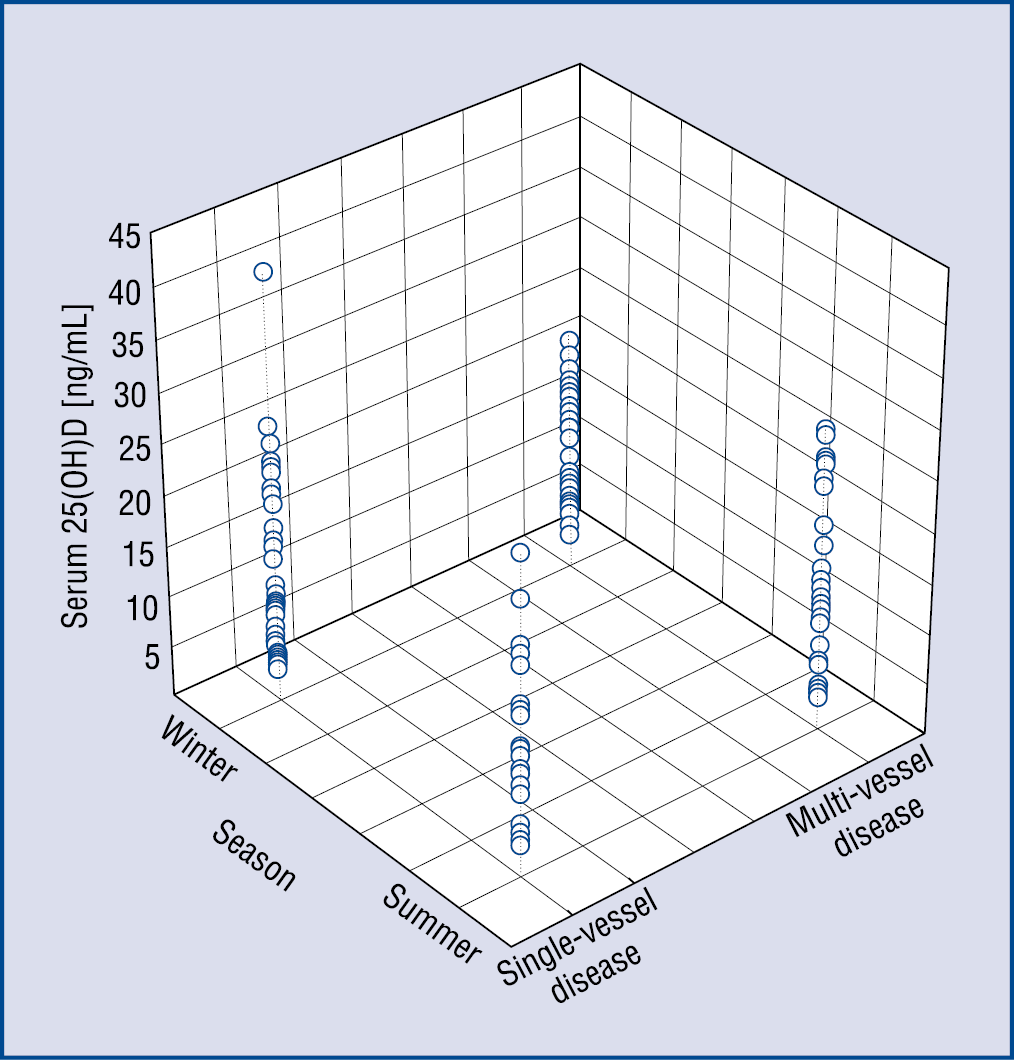 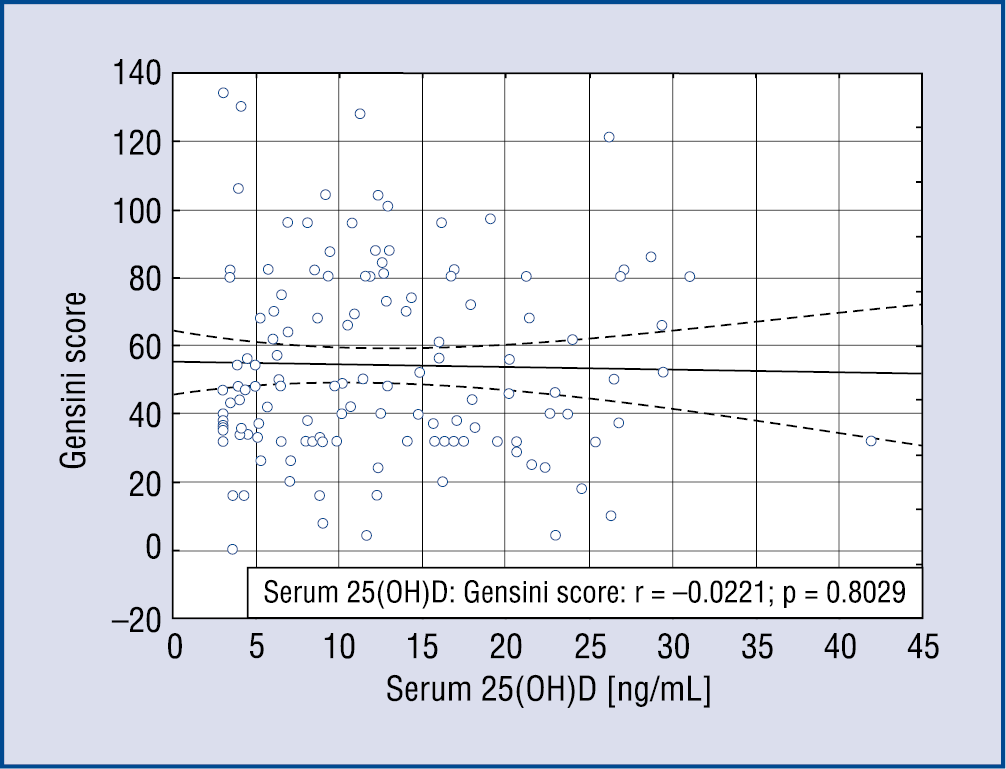 Our study describes the vitamin D status in patients presenting the first STEMI. It confirms a highly prevalent deficiency of vitamin D in these patients. Only 2% of participants had sufficient levels of 25(OH)D.

Lee et al. [21] have demonstrated similar results. Among 239 patients admitted with acute MI, 96% had abnormal 25(OH)D levels (≤ 30 ng/mL), 75% were found to have 25(OH)D levels ≤ 20 ng/mL, which is in the deﬁcient range, 24% were in the insufficient range with vitamin D levels of 20 ng/mL to 30 ng/mL and only 4% had normal level with vitamin D levels > 30 ng/mL. Mahdavi et al. [22] have also observed vitamin D deficiency in most patients with acute coronary syndrome. The proper 25(OH)D level was found only in 10.6% of 216 investigated patients (110 with STEMI, 106 with unstable angina/non-STEMI). Similar results were presented by Correia et al. [23]. Vitamin D sufficiency was diagnosed only in 10% of 216 patients with acute MI (7% with STEMI). Serum 25(OH)D level < 20 ng/mL was present in 59% of participants. The above studies support our observation of a high prevalence of vitamin D deﬁciency in patients with MI.

The results of 2 studies: The Multi-Ethnic Study of Atherosclerosis (MESA) [25] and The Coronary Artery Calciﬁcation in Type 1 Diabetes (CACTI) [26] indicate that vitamin D deficiency may be of particular importance during the early events leading to the development but not to the progression of coronary calcification. The results suggest that lower vitamin D levels predicted coronary artery calciﬁcation, which is a sensitive measure of subclinical coronary atherosclerosis and a strong risk factor for cardiovascular events.

In our study no statistically significant correlation between 25(OH)D levels and severity of atherosclerosis in angiography was observed. There is a lack of data concerning this relationship in patients with STEMI. Although Correia et al. [23] in a comparable study have not evaluated the correlation between vitamin level and atherosclerosis severity, they have noticed the same mean value of Gensini score in patients both with severe (< 10 ng/mL) and not severe (> 10 ng/mL) vitamin D deficiency. Similar observations were reported in LURIC study [10]. Serum 25(OH)D levels were measured in 3,299 Caucasian patients who were routinely referred to coronary angiography. Concerning the vitamin level all patients were classified into four group (< 10, 10–20, 20–30, > 30 ng/mL). The frequency of angiographically defined CAD was similar in all groups.

On the basis of the results of the study we cannot determine whether levels greater than 30 ng/mL would be associated with greater atherosclerosis reduction. Recently, the US-Institute of Medicine has declared circulating 25(OH)D levels of 30 ng/mL sufficient to the health of general population [29]. There is no doubt that future studies are needed to obtain a better clarification of the physiologic range of vitamin D for preventing atherosclerosis and CVD.

Blood samples were drawn only once in our cohort. A single 25(OH)D measurement may not reflect lifetime vitamin D status. Small study group limited power of some analyses, thus their results cannot be extrapolated to the general population of patients with STEMI.

In conclusion, this study demonstrates — to our knowledge for the first time — that level 25(OH)D is not associated with the severity of coronary lesions on the angiogram of patients presenting with the first STEMI. We confirmed a high prevalence of vitamin D deﬁciency in patients with acute MI.

This study was supported by grant no. NN402504640 from the State Committee for Scientific Research, Poland.