The prognostic value of arterial stiffness in systolic heart failure

Heart failure (HF) is the inability of the heart to create sufficient blood flow to meet the metabolic needs of the body [1]. Despite many advances in diagnosis and treatment, HF still affects about 20 million people worldwide [2]. A permanent increase in the vascular load as in chronic arterial hypertension is a significant cause of HF. Ventricular failure is quite sensitive to changes in pressure and vascular load, and minor increases in vascular load can lead to disproportional major reductions in the cardiac output [3, 4]. For these reasons, vasodilator treatment of HF is common [5, 6].

Many factors have been proposed as indicators of survival in HF; however there are as yet no adequate trials to show the value of any of these variables [7]. This trial was designed to investigate the value of arterial stiffness in predicting the prognosis in patients with advanced HF.

The local ethical committee approved this study. Informed consent was obtained from all patients.

A detailed echocardiographic examination was performed by an experienced technician without reference to the clinical findings, using an Acuson Sequoia C 256 (General Electric), USA) cardiovascular imaging system providing 2-dimensional (2D) echocardiography, spectral Doppler and color Doppler flow mapping information using a 2.5 or 3.5 MHz duplex transducer and a 1.9 MHz sound only continuous wave Doppler transducer. Standard views were obtained with the patient in the left lateral position. Images were stored on videotape. M-mode, 2D, color flow, and Doppler studies were performed on all patients. LV function was assessed qualitatively as normal, or as mild, moderate or severe dysfunction. Where possible, we calculated the EF by the biplane disc summation method (Simpson’s rule) [8].

Arterial stiffness was assessed noninvasively with the arteriograph (TensioMed, Budapest, Hungary) [9]. Oscillometric pulse waves from the participants. We measured the distance between the jugulum-symphysis (which is the same as by the invasive method, the distance between the aortic root and the aortic bifurcation), and pulse wave propagation velocity (PWV) was calculated. Pulse waves were recorded at supra-systolic pressure. The oscillation signs were identified from the cuff inflated at least > 35 mm Hg above the systolic blood pressure. In this state brachial artery occlusion was complete; it functions as a membrane before the cuff. Pulse waves hit the membrane and are measured as oscillometric wave, shown on the monitor. The augmentation index (Aix) was defined as the ratio of the difference between the second (P2 — appearing because of the reflection of the first pulse wave) and first systolic peaks (P1 — induced by the heart systole) to pulse pressure (PP), and was expressed as a percentage of the ratio (AI = [P2 – P1] / PP × 100).

During measurements special attention was paid to the following: the avoidance of speaking muscle movement, especially the arms. Muscle movement distorts the shape of the measured pulse wave. The patient should not have taken nitrates or eaten a large meal, and should avoid black coffee, smoking up to 3 h previously and alcohol for 10 h before the examination. Sleeping is not allowed! Physical and mental relaxation is necessary for at least 10 min before measurement. Distractions should be avoided during measurement, and complete silence is ideal. If the ‘white coat effect’ is suspected, several measurements should be made.

All analyses were performed using SPSS statistical software package version 16.1. Continuous variables in the group data are indicated as mean ± standard deviation (SD). Categorical variables are given in numbers and percentages. An independent sample t-test and multivariate analysis (ANOVA) were performed according to the range of continuous variables between the groups. For nonparametric tests, Mann-Whitney U and Kruskal-Wallis tests were applied. A χ2 test was used to compare categorical variables. Parametric or nonparametric (Pearson and Spearman) correlation analysis was performed to identify the relationship between continuous variables. Multivariate binary logistic regression analysis was performed to identify factors affecting mortality. A per unit increase in the variables identified from the study increase or decrease the risk by a factor specified by the odds ratio. ROC analysis was used to determine the cutoff value for the variables as predictors in mortality. Statistical significance was accepted as p < 0.05.

There were 76 males and 22 females, mean age 59 ± 11 years; 50 patients had hypertension and 40 diabetes mellitus; 36 of the patients had died. At the 18-month follow-up point all patients or a close family member could be contacted. There was sudden cardiac death in 24 and decompen­sation following hospitalization in 12. During the follow-up, all 70 patients were hospitalized with the diagnosis of decompensated cardiac failure and followed up. There were no significant differences between deceased patients and survivors, or hospitalized and non-hospitalized, with respect to taking beta-blockers, furosemide, digoxin, spironolactone, statin, or angiotensin receptor blocker and angiotensin converting enzyme inhibitor use. The demographic characteristics an laboratory findings of patients were determined in Table 1.

LV end-systolic and end-diastolic size and volume were significantly greater and LVEF was significantly lower in those who died and those hospitalized (Table 2).

The values of Aix vs. PWV differed significantly between the patients who died and the survivors, and between the hospitalized and non-hospitalized patients. During decompensation, Aix and PWV were greater than when the same patients were adequately treated (Table 3).

Table 3. Comparison of the pulse wave velocity (PWV) and the augmentation index (Aix) values between the deceased vs. surviving patients, hospitalized vs. non-hospitalized patients and compensation vs. decompensation.

An independent association between mortality and LVEF, BNP, PWV and Aix is shown below the logistic regression analysis in Table 5.

Table 5. Independent determinants of mortality in patients with heart failure; age adjusted odds ratio were given.

The area under the ROC curve of the relationship between HF patients’ Aix and mortality was 90.7% (Fig. 1). The Aix for all patients was found to be a predictor of mortality, with the cutoff value at –13.35, with 91.8% sensitivity and 81.9% specificity.

The area under the ROC curve of the relationship between mortality in HF patients and PWV was 81.7%. In this analysis the cutoff value for PWV as a predictor of mortality was taken as 10.8 with 83.3% sensitivity and 66.4% specificity.

The area under the curve of the logistic regression analysis shows Aix to be a stronger independent determinant of mortality than PWV (Fig. 1). 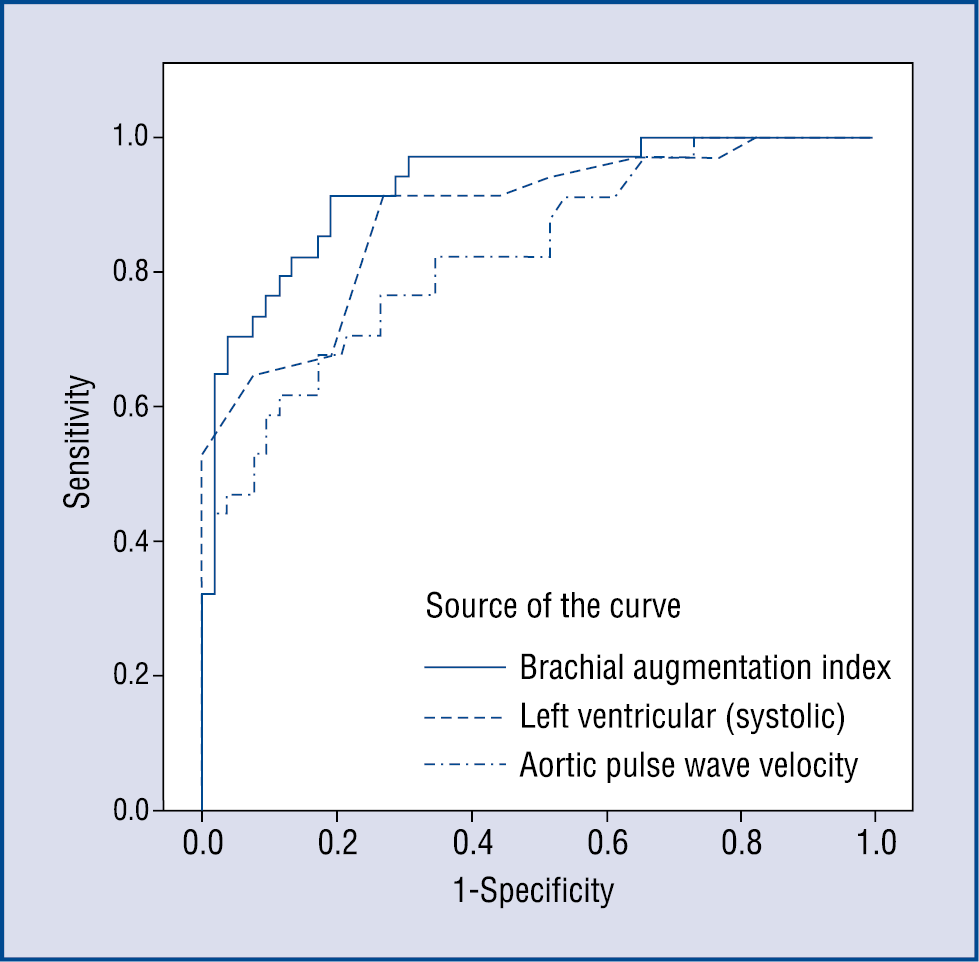 The main finding of our study is that arterial stiffness is a strong predictor of mortality in advanced HF, independently of other prognostic variables. Previous studies have focused on multiple variables to predict the prognosis of HF. Decreased systolic and diastolic blood pressure [8], increased resting pulse rate [9, 10] and PP [8] are all important in the prognosis of HF patients; they emerged as important in our study too.

Natriuretic peptide levels are useful biochemical markers in diagnosis, risk evaluation and follow up in heart diseases [11, 12]. There is a positive relationship between plasma natriuretic peptide levels and PWV [13, 14]. Kaji et al. [15] reported the existence of an association between plasma BNP and the radial Aix. Sakaguri et al. [16] showed a significant relation between BNP and aortic stiffness in patients with coronary artery disease. In our study BNP concentrations were greater in the hospitalized and deceased groups and there was a significant correlation between arterial stiffness indicators. In multivariate analysis of laboratory values, BNP levels were an independent prognostic determinant of mortality.

Renal insufficiency, common in patients with HF, worsens the prognosis [17–20]. The present results agree with the hypothesis that mild impairment of renal function might increase arterial stiffness. Schillaci et al. [21] found that decreased e-GFR was a major determinant of accelerated progression of central and peripheral arterial stiffness in hypertensive patients with normal renal function. Kwamato et al. [22] showed that decreased e-GFR is associated with an increased risk of increased PWV in the general population. Decreased GFR, and increased blood urea nitrogen and creatinine levels are significant prognostic factors for HF. In our study, e-GFR was lower in hospitalized patients and non-survivors; in the latter it was correlated to arterial stiffness. In multivariate analysis, e-GFR appeared as an independent prognostic determinant of mortality.

Many previous trials have assessed the prognostic importance of PWV in hypertension, diabetes, end-stage renal failure and in the elderly. In an epidemiological trial by Willum-Hansen et al. [27], the associations of PWV increase with the cardiovascular disease risk and increased mortality was demonstrated. In the Framingham cardiac trial, individuals with a high PWV value had a greater risk of cardiovascular disease mortality [7]. Our study is the first in which arterial stiffness was evaluated at the start of the trial in patients with systolic HF; arterial load is an important factor in the development of HF [3]. There is increased arterial stiffness and a decreased aortic flexibility in HF [28–32]. Arnold et al. [32] reported increased PWV in patients with moderate/advanced HF. Increased brachial and aortic stiffness increase the amplitude of the reflected pressure wave in patients with HF [29]. An increase in arterial stiffness is significant for mortality and the finding of recurrent myocardial infarction in patients with LV dysfunction after infarction [33]. By causing an increase in PWV, stiff conduit vessels cause the reflected wave to return in late systole rather than in diastole, impeding the forward systolic wave motion. An additional load is thus imposed on the LV, which can lead to decompensation and arrhythmias. Aix and PWV were strong predictors of mortality in non-survivors. They were also independent of other prognostic variables. Non-survivors had significantly greater arterial stiffness than those who survived.

Increased arterial stiffness is associated with decompensation [34, 35]. In patients with a low EF, the renin–angiotensin–aldosterone system and inflammatory mediators increase in activity, resulting in increased water and salt retention. This in turn leads to a further increase in arterial stiffness [34–37]. Renal function deteriorates, the response to diuretics is decreased, ventricular workload is increased, and the decompensation process accelerates [35, 37]. Our study showed that PWV and Aix were significantly lower when treatment was adequate; arterial stiffness was always greater in hospitalized patients.

We found measurement of arterial stiffness to be a convenient, inexpensive and reliable method for predicting mortality in patients with advanced HF. In addition, it could also be used in outpatients with HF to optimize treatment and thus avoid hospitalization.