Despite overt benefits for patients, EACAB constitutes an ultimately challenging surgical technique with a steep learning curve. Since methods of surgical revascularization are reaching an immensely complex level, a question of patients’ adherence to concurrent therapy rises. Apart from lifestyle modification, pharmacological treatment remains a cornerstone of secondary prevention of coronary artery disease (CAD) [3]. Primary and secondary prevention is of utmost importance for the reduction of cardiovascular morbidity and mortality [4]. Lifelong administration of antiplatelet agents, beta-blockers (BB), angiotensin-converting enzyme (ACE) inhibitors or angiotensin receptor antagonists and statins is thus strongly recommended by the European Society of Cardiology (ESC) guidelines [5]. Still, only half of the patients suffering from chronic diseases in developed countries follow treatment recommendations [6].

High satisfaction rate reported in patients after EACAB [7] makes them, in theory, perfect candidates for the evaluation of individual determinants of pharmacological compliance, as opposed to patients undergoing standard on-pump coronary artery bypass grafting (CABG) fraught with local and systemic complications. Previous reports have extensively dealt with socioeconomic and educational aspects of drug non-compliance [8–10], how­ever, clinical characteristics of pharmacologically non-adherent individuals still remain vague. More to the point, no convincing data exists concerning secondary medical prevention in subjects after EACAB. Thus, the authors intended to conduct a diligent evaluation of patients’ adherence to optimal pharmacotherapy as established by the ESC guidelines, together with the assessment of potential clinical risk factors of medical non-compliance in a large cohort of cardiac surgery patients.

We performed an epidemiological, cross-sectional study. The study group comprised 706 consecutive patients with single-vessel (76.5%) or multi-vessel (23.5%) CAD, who underwent EACAB between April 1998 and December 2010. Baseline demographic and clinical characteristics of the patients, including the presence of concomitant diseases, were obtained from hospital records. Charlson comorbidity index [11] was calculated. Post-operative pharmacological treatment was also assessed. All patients gave their written informed consent to participate in the study. The study was approved by local Ethics Committee and complies with the Declaration of Helsinki.

The follow-up investigation was performed between February and December 2011. Mean duration of follow-up was 2132 ± 1313 (median 1918.5, longest 4661) days. Data covering current pharmacological treatment with antiplatelet agents, BB (or heart rate lowering calcium channel blockers [CCB] in case of intolerance and/or poor efficacy of beta-blockade), ACE inhibitors or angiotensin receptor blockers (ARB) and statins was acquired by means of structured telephone interview. In case of no response or unknown phone number, a standardized questionnaire was sent by post. All patients were subsequently interviewed with respect to rehospitalization and the occurrence of major cardiac and cerebrovascular events (MACCE), which were defined as: myocardial infarction (MI), repeat revascularization, and stroke or transient ischemic attack (TIA). The number of deceased patients was verified with national registry of cardiac surgery procedures.

Impact of baseline demographic and clinical features on adherence to secondary pharmacological prevention was assessed. Additionally, we evaluated patients’ prognosis with relation to their compliance with the recommended treatment.

Statistical analysis was performed using the MedCalc software (v11.0.1). Data is shown as mean and standard deviation for quantitative variables, and as relative values and percentage for qualitative variables. In-group differences in quantitative variables were tested using analysis of variance (for normally distributed variables) or the Kruskal-Wallis test (for non-normally distributed variables). Normality of the data distribution was verified using the Shapiro-Wilk test. Chi-square test was used for qualitative variables. Odds ratios with 95% confidence intervals were calculated to evaluate basic determinants of patients’ compliance and its association with outcome. P < 0.05 was considered statistically significant.

Table 1. Baseline characteristics of the subjects.

Pharmacological treatment in a follow-up

The majority of patients received drug therapy as recommended by the ESC [5]. 353 (85%) patients received antiplatelet agents (including acetylsalicylic acid [ASA], clopidogrel or ticlopidine), while BB or CCB were routinely ingested by 349 (84%) patients. Statins were used by 310 (74.7%) of the EACAB patients. Only 274 (66%) subjects took ACE inhibitors or ARB.

Table 2. Impact of preoperative qualitative demographic and clinical variables on patients’ compliance in a follow-up. 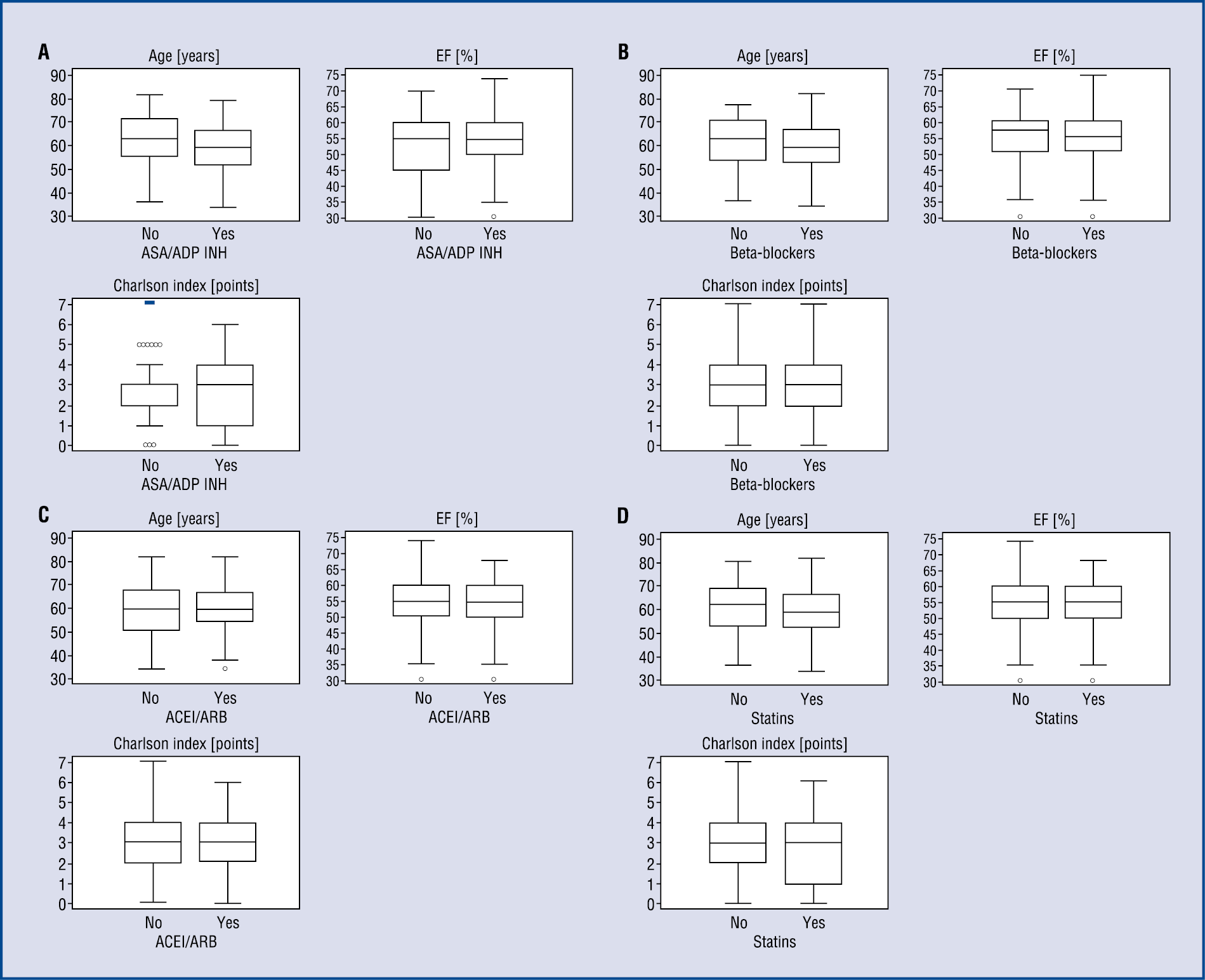 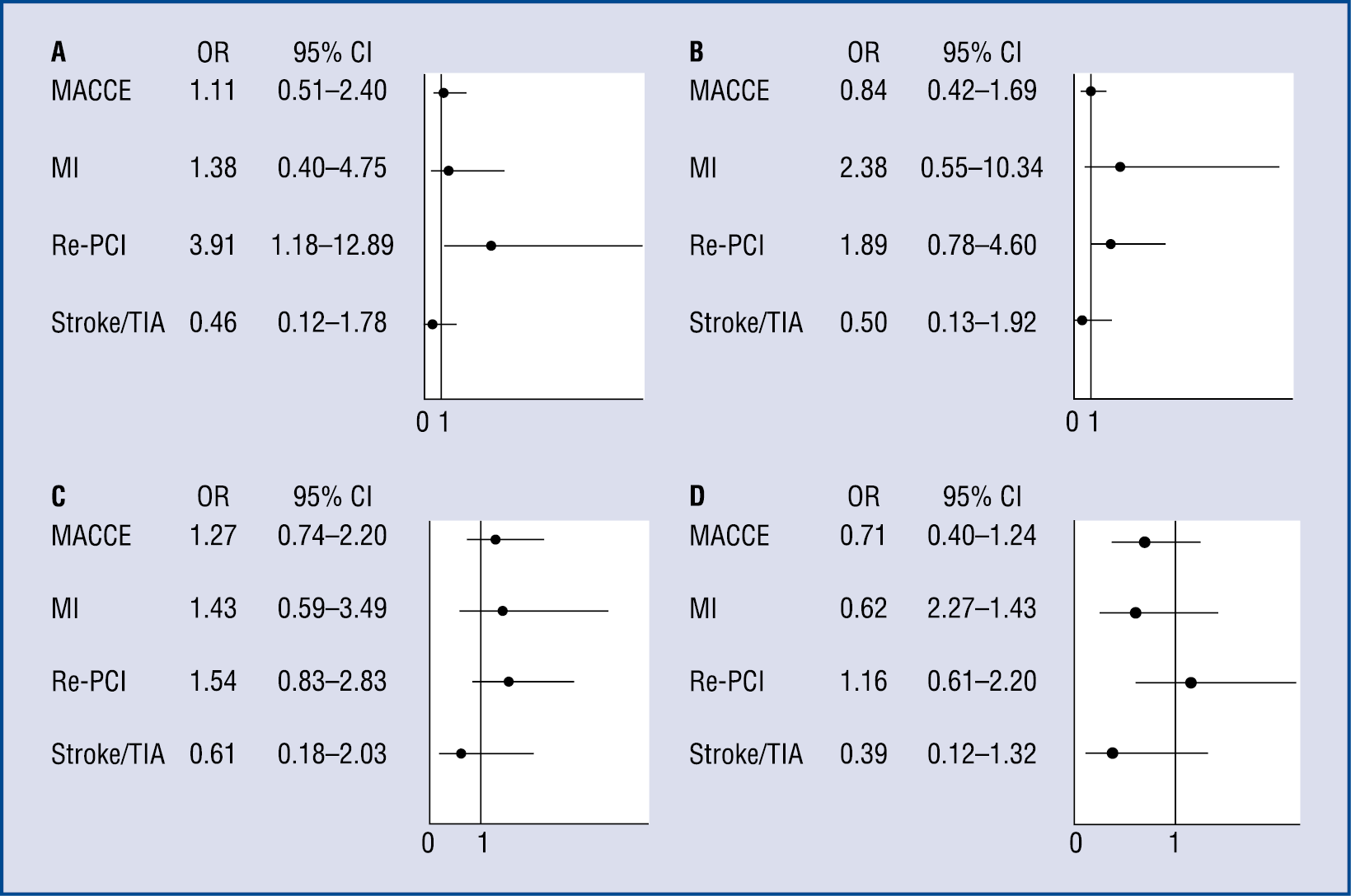 The present study has investigated the association between patients’ compliance with recommended pharmacological treatment and baseline clinical variables, and postoperative cardiovascular events in a large cohort of patients after EACAB. This analysis appears to be crucial because of the paucity of similar data in literature. The knowledge concerning clinical characteristics of potentially non-compliant individuals might help improve ingestion of recommended medications by means of actions devoted particularly to those subjects.

The implementation of pharmacotherapy after cardiac surgery is of great importance as it reduces mortality, morbidity, risk of rehospitalization and increases quality of life. We found that fulfillment of recommended secondary prevention guidelines was insufficient in relation to all groups of drugs we took into account. Similar results were obtained by several investigators [12–14]. In the retrospective study of Vermeer and Bajorek [12] in patients 3 months after MI only 82% subjects used BB, 86% had statin therapy and 79% received either ACE inhibitor or ARB. Worrisome results are given by Lee et al. [13] who underlined unsatisfactory compliance with pharmacological treatment 3 months after acute coronary syndrome. Their study revealed that only 63.9% of patients were receiving BB, 62.6% ingested statins and 51.8% had ACE inhibitor/ARB therapy [13]. Moreover, Griffo et al. [14] revealed that 12 months after percutaneous revascularization 94% of individuals were taking antiplatelet agents, 87% statins, 80.7% BB and 81.1% received ACE inhibitors. Regardless of statistical variations, all the above-mentioned reports stay consistent and disconcerting.

In the light of current ESC recommendations [3, 5] underpinning the importance of 4-drug regimen in stable patients after acute coronary syndrome, the observed discrepancy between guidelines and real medical practice substantiates further investigation into the risk factors of non-compliance. One of them is inappropriate implementation of the guidelines by physicians who are responsible for postoperative pharmacotherapy. This problem was described by Fox et al. [15] who documented that only 92% of CABG patients were ordered ASA, 70% BB, 73% had statins and 26% were prescribed ACE inhibitors at discharge. In a similar study it was shown that 92% of patients were recommended to take ASA, 79% BB, 55% ACE inhibitor or ARB and 92% statins [16]. Additionally, this important gap between current guidelines on cardiovascular pharmacotherapy and every-day clinical practice was illustrated in terms of primary prevention in Spanish primary health care units [17].

Secondly, contraindications and side effects account only for small portion of drug cessation. They include hypotension after ACE inhibitors or ARB, bradycardia following BB administration, major bleeding caused by antiplatelet agents and myopathy after statins. Yet, none of the respondents demonstrated any of the abovementioned symptoms.

Dosing time of certain pharmacologic agents is, beyond doubt, a key factor contributing to non-compliance. Statins, ACE inhibitors and ARB are frequently ingested before sleep and therefore patients tend to withdraw or forget their nocturnal medications, whereas the introduction of once-daily formulations has proven beneficial in terms of adherence to evidence-based therapies [10]. Furthermore, there are no fixed combinations on the market combining any of the 4 drug regimen analyzed in our study. It has been well documented that high number of pills corresponds with poor compliance. Frequent termination of crucial drugs revealed by our study may be partially triggered by financial limitations, especially among seniors, due to high prices of drugs for the chronically ill patients or lack of social support. Lack of continuity of pharmacotherapy due to poor relay of clinical data between specialists and general practitioners often results in alteration of therapy, since discharge summaries are not directly mailed to outpatient clinic in the setting of Polish healthcare system.

Patients’ self-confidence of being cured by a complex cardiac procedure, endorsed by rapid improvement of physical exertion tolerance, may also be an incentive to cessation of pharmacotherapy or even failure to fill the prescription [18].

Last but not least, a potent demographic feature in the form of education cannot be neglected as it directly affects the level of awareness and commitment to overcome the disease. The idea of patients’ involvement in the process of therapy derives from the salutogenic model of health proposed by Antonovsky, which pursues psychosocial determinants of medical condition [19]. Lifestyle modification is regarded as the most efficient way of dealing with modifiable cardiovascular risk factors. In line with these principles of health promotion, therapeutic non-adherence is widely recognized as a vital, yet often underestimated cardiovascular risk factor common for all populations [20].

Interestingly, we have revealed some association between compliance and MACCE occurrence. The patients who experienced repeat revascularization with PCI more frequently used antiplatelet drugs, which can probably be attributed to more careful approach of attending physicians alert to severe complications, such as stent thrombosis. It is in line with current recommendation as the treatment reduces risk of stent occlusion and subsequent risk of all cardiovascular events, including death which was confirmed in several studies [21]. Also, we found a correlation between ingestion of antiplatelet agents and BB, and the need for readmission. Compliant individual less frequently experienced hospitalization compared to patients indifferent to pharmacotherapy, hence we assume that pharmacological interventions help improve patients’ outcome and reduce costs for the healthcare system [21–26]. Although our study failed to demonstrate a statistically significant link between patients’ clinical features and drug compliance, we managed to denote considerable prevalence of the issue of therapeutic non-adherence and its clinical implications.

Unfortunately this study has several drawbacks that should be taken into account in data interpretation. Firstly, although with prospective follow-up, the study is cross-sectional in its design. Accordingly, we may not assess cause — effect relationship between medications which have been taken and the incidence of MACCE. As a result, we also did not adjudicate the influence of the follow-up duration on the results. Nonetheless, we performed a sub-analysis of impact of follow-up time on the subjects’ amenability in which we tried to overcome this limitation to some extent. Secondly, as we interviewed about 60% of the cohort, this research may generate selection bias, as well as recall bias in remaining participants. Finally, we did not attempt at minimizing the effect of confounders as we hadn’t performed a multivariate analysis. However, we found only minor determinants of patients’ compliance so the implementation of regression model was rather impractical.

EACAB patients’ compliance with pharmacotherapy guidelines is rather insufficient with regard to current ESC recommendations. We conclude that drug non-adherence does not correspond with demographic and clinical features of the subjects. For improvement, multidisciplinary approach including patients’ education, enhancement in therapeutic rapport between doctors and patients, as well as improvement of healthcare system should be incorporated into clinical practice.

This study was supported by the Polish Ministry of Science and Higher Education grant No. NN-6-342/07.