High mobility group box 1 protein (HMGB1), a non-chromosomal nuclear protein that regulates gene transcription and maintains the nucleosome structure, could be negatively released by necrotic cell, apoptotic cell or positively activated innate immune cells (such as macrophages and monocytes) [1, 2]. HMGB1 has been identified as a novel pro-inflammatory cytokine in several cardiovascular diseases [3–6]. Recently, HMGB1 has been found to function as an early pro-inflammatory mediator during myocardial ischemia and reperfusion (I/R), as well as some classical early pro-inflammatory cytokine such as tumor necrosis factor-α (TNF-α), interleukin-6 (IL-6) and could promote the release of TNF-α and IL-6, whereas HMGB1 A box peptide (a specific HMGB1 antagonist) could protect against myocardial I/R injury and inhibit the release of TNF-α and IL-6 [3], while inflammatory response is considered to be a critical factor of myocardial I/R injury [7, 8]. These results suggested that HMGB1 plays an important role in myocardial I/R injury.

Glucagon-like peptide-1 (GLP-1), a gut incretin hormone secreted from L cells in the intestine in response to food intake, has been considered an attractive agent for the management of type-2 diabetes mellitus [9]. The GLP-1 receptor agonist-exendin-4 (Ex-4), a 39 amino acid peptide, has been shown to activate GLP-1 receptors to increase intracellular cAMP in pancreatic acinar cells and has no effect on VIP receptors, functioning identically to GLP-1. A growing body of evidence shows that GLP-1 and Ex-4 could provide significant beneﬁcial effects for cardiovascular diseases, including myocardial I/R, in both experimental animal models and patients [10–13]. Recently, Cai et al. [14] have found that Ex-4 could inhibit HMGB1 expression induced by high glucose condition in cardiomyocytes. Thus, the hypothesis that Ex-4 may attenuate myocardial I/R injury by inhibiting HMGB1 expression was tested in a rat myocardial I/R model in the present study.

The experiment protocol conformed to the Guide for the Care and Use of Laboratory Animals published by the US National Institutes of Health (NIH Publication, revised in 1996) and was approved by the Institutional Animal Care and Use Committee. Male Sprague-Dawley rats (250–300 g) were randomly assigned into 4 groups receiving the following treatments:

After being anesthetized with sodium pentobarbital (45 mg/kg, i.p.), the rats were ventilated artificially with a volume-controlled rodent respirator at 70 strokes per minute. Rats were placed on an electric heating pad to maintain the body temperature at 37°C. Heparin (200 IU/kg, i.v.) was given before ischemia. Lead-II of the electrocardiogram was monitored with subcutaneous stainless steel electrodes. Electrocardiogram was monitored using a computer-based EP system (LEAD2000B, Jinjiang Ltd, China).

A thoracotomy through a left parasternal incision was performed to expose the anterior wall of the left ventricle. A 4–0 silk suture on a small curved needle was passed through the myocardium beneath the middle segment of the LAD branch coursing down the middle of the anterior wall of the left ventricle. A small vinyl flake was passed into both ends of the suture, which was then fixed by champing the tube with a mosquito hemostat. A successful myocardial I/R model was confirmed by ST segment elevation in leads-II and regional cyanosis of the myocardial surface. The rats subjected to a 30-min occlusion of the LAD and followed by a 4 h reperfusion.

To assess the lactate dehydrogenase (LDH) and creatine kinase (CK), blood samples were collected and centrifuged. Standard techniques using commercialized assay kits in accordance with the manufacturer’s instructions (Nanjing Jiancheng Bioengineering Institute, China) were used for the analyses. Values were expressed in international units per liter.

Assessment of the infarct size

The infarct size was established by 2,3,5-tri­phenyltetrazolium chloride (TTC, Sigma-Aldrich) staining as described previously [17]. Briefly, after reperfusion the LAD was occluded again and 2 mL of 1.0% evans blue dye was injected via the femoral vein. Each heart was then sliced horizontally to yield 5 slices. The slices were incubated in 1% TTC for 15 min at 37°C. The infarct area (white) and the area at risk (red and white) from each section were measured using an image analyzer (Image-Pro Plus 3.0, Media Cybernetics, Silver Spring, MD). The infarct size was expressed as a percentage of the risk area volume (%, infarct size/risk area).

Measurement of myocardium malondialdehyde (MDA) concentration and superoxide dismutase (SOD) activity in myocardial tissue were measured using commercialized assay kits in accordance with the manufacturer’s instructions (Nanjing Jiancheng Bioengineering Institute, China), as described in the previous study [14]. The former were used as indexes of oxygen free radical and the latter as lipid superoxide level in the myocardium, respectively.

Statistical analysis was performed with the SPSS 16.0 (SPSS Inc., Chicago, IL, USA). All values were expressed as mean ± standard deviation. One-way ANOVA or Welch was used for comparisons among groups and the Least-significant Difference or Dunnett T3 was used for post-hoc multiple comparisons. Statistical significance was defined as p < 0.05. 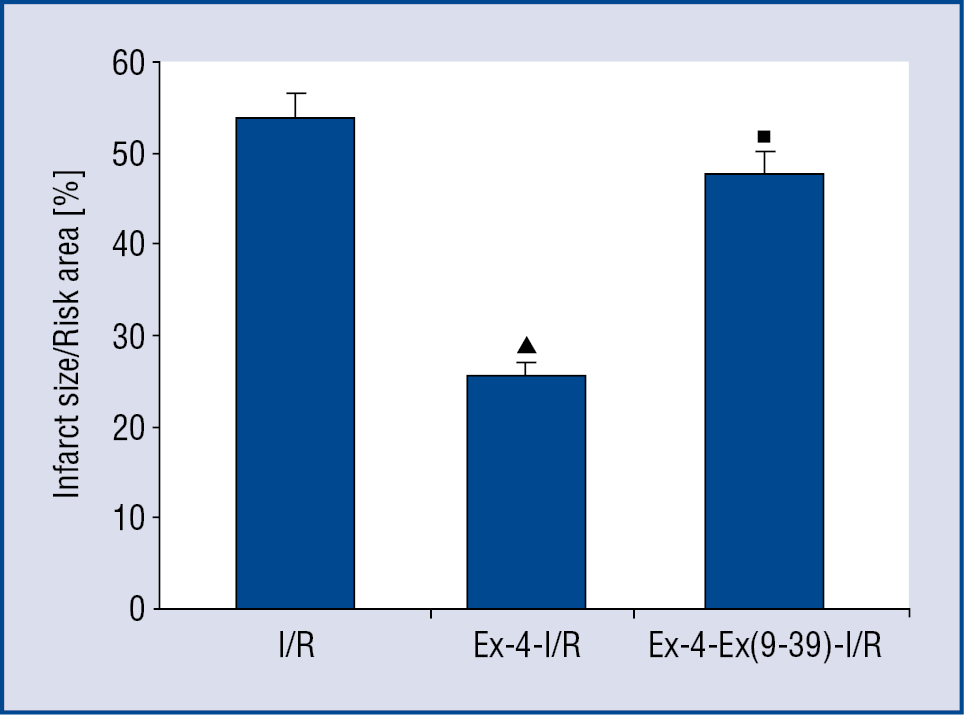 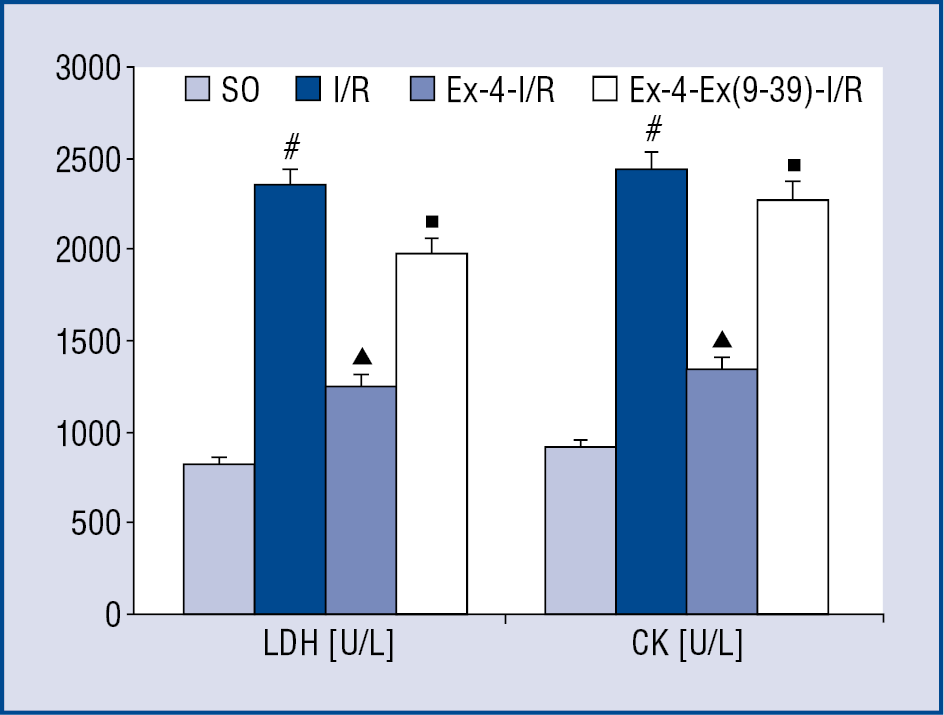 p < 0.05 vs. Ex-4-I/R group; LDH — lactate dehydrogenase; CK — creatine kinase; SO — sham operated control; other abbreviations are identical with those from Figure 1.

p < 0.05 vs Ex-4-I/R group; MDA — malondialdehyde; SOD — superoxide dismutase; other abbreviations are identical with those from Figure 1 and Figure 2. 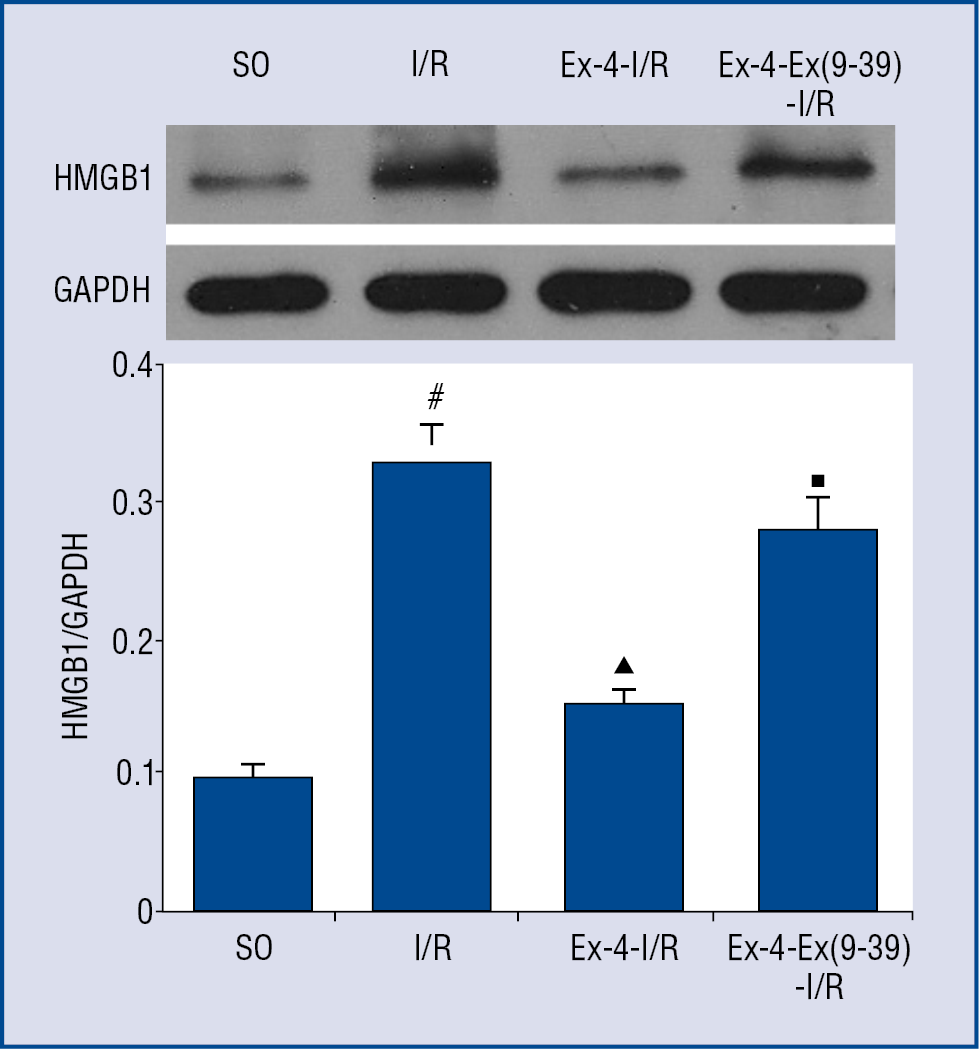 p < 0.05 vs. Ex-4-I/R group; HMGB1 — high mobility group box 1 protein; GAPDH — glyceraldehyde-3-phosphate dehydrogenase; other abbreviations are identical with those from Figure 1 and Figure 2.

In the study, we only investigated the effect of Ex-4 on myocardial I/R injury and HMGB1 expression. The precise mechanisms underlying our observation will require future elucidation.

The present study suggested that Ex-4 could attenuate myocardial I/R injury which may be associated with inhibiting HMGB1 expression.