Galectin-3, a soluble beta-galactoside-binding lectin, is secreted by activated macrophages and modulates several physiological and pathological processes, including inflammation and fibrosis. This protein directly induces fibroblasts to proliferate and deposit type I collagen in the extracellular matrix [1, 2]. The involvement of galectin-3 in the development and progression of fibrosis has been demonstrated in various organs, for example in the liver [3], kidney [4] and heart [2].

Despite improvements in the diagnosis and therapy of cardiovascular diseases, heart failure (HF) is still associated with a high morbidity and mortality [5, 6]. Several biomarkers are used for early diagnosis and risk stratification in this group of patients. Galectin-3 levels are elevated in various cohorts of HF patients and independently associated with higher risk of death, HF progression and rehospitalization [7–12].

Myocardial infarction (MI) is one of the major causes of HF. Primary percutaneous coronary intervention (pPCI), as a reperfusion method in acute MI, plays an important role in the prevention of death and HF development [13, 14]. We hypothesized that galectin-3 measurement in acute phase of MI could provide additional useful information in this group of patients. The aim of this study is to assess the association between galectin-3 levels and various clinical parameters in subjects with first MI treated with pPCI without prior HF.

The study protocol was approved by Bioethics Committee of the Medical University of Lodz. All subjects gave their informed consent for participation in the study.

In the statistical analysis results were presented as mean ± standard deviation (SD) for continuous variables and as percent for categorical variables. Differences in categorical variables between groups were evaluated with the χ2 test. Differences between mean values for continuous variables were evaluated with the Student t test or the Mann-Whitney U test. We assessed the correlation between galectin-3, NT-proBNP, hsCRP and EF using the Spearman rank correlation coefficient. Logistic regression was used to estimate the association between discrete dependent and continuous variables or discrete independent variables. Potential predictors of elevated levels of galectin-3 were subjected to a univariate risk analysis model of logistic regression. To determine the strongest and most independent predictors, independent variables significantly changing the matching of univariable models were included in multivariate model. The level of significance p < 0.05 was accepted for all the tests used. Statistical analysis was facilitated by the use of STATISTICA 10 PL (StatSoft Polska, Krakow, Poland).

Patients with elevated levels of galectin-3 were more often females, were older and more often presented with diabetes and permanent atrial fibrillation (AF). In addition, differences in mean values of glucose, creatinine, GFR, uric acid, NT-proBNP and hsCRP were all statistically significant between the study and control groups. Differences in other parameters were not statistically significant.

We compared in-hospital clinical events in patients with elevated galectin-3 levels to the control group (Table 2). There were no differences in frequency of ventricular arrhythmias (ventricu- lar fibrillation and ventricular tachycardia) and pressor amines therapy. Patients with galectin-3 levels > 16 ng/mL more often had new-onset AF in acute phase of MI (p < 0.05), new diagnosis of HF (p < 0.05), in-hospital infections (pneumonia, upper respiratory tract infection, urinary tract infection; p < 0.05), and more often needed diuretic treatment because of symptoms (p < 0.001). There was no difference in diuretic therapy before admission between study and control group (11.1% vs. 9.2%, p > 0.05).

Table 2. Comparison of clinical events during hospitalization in study and control group. 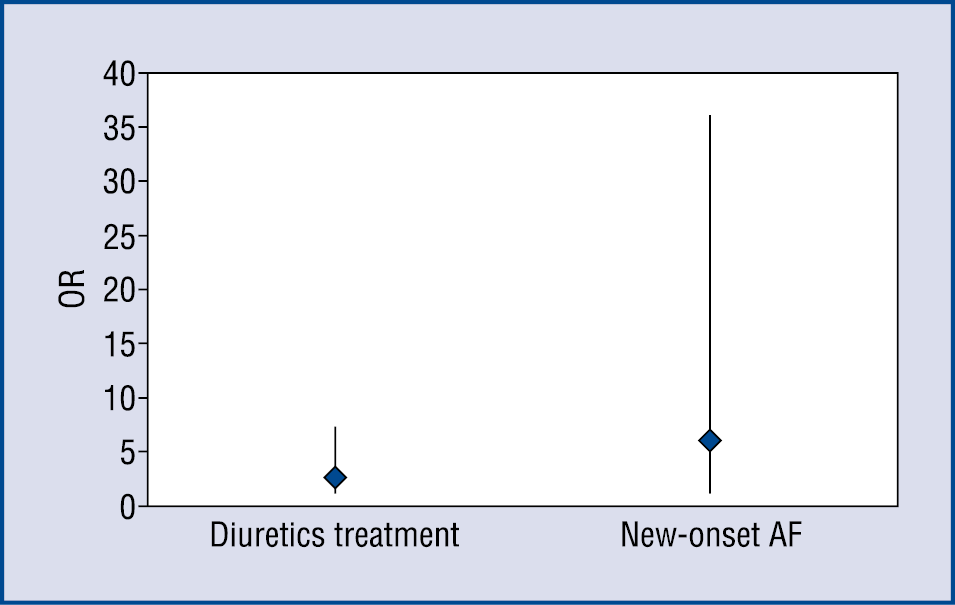 Galectin-3 has recently been widely studied as a prognostic biomarker in a variety of HF cohorts. The majority of these included patients with symptomatic HF and decreased EF. For example, the Coordinating Study Evaluating Outcomes of Advising and Counseling in Heart Failure (COACH) enrolled 1023 subjects in New York Heart Association (NYHA) functional class II–IV (50% were in NYHA IV class) and EF ≤ 35% (mean 33 ± 15%) [6]. In a sub-study of the COACH cohort (n = 592), the median value of galectin-3 was 20 ng/mL (range 5.0–66.6 ng/mL) and a doubling of its level was associated with a significant increased risk for all-cause mortality and HF hospitalization during 18-month follow-up (HR 1.97, p < 0.001) [12]. Myocardial injury generates inflammatory and fibrosis signals that activate macrophages and stimulate galectin-3 secretion, although in our observation, patients in acute phase of first MI without prior HF had notably lower levels of this serum biomarker in comparison to subjects with chronic cardiac injury in the literature [8–12]. There are only a small numbers of studies concerning galectin-3 measurement in patients with MI. Data from the Pravastatin or Atorvastatin Evaluation and Infection Therapy-Thrombolysis In Myocardial Infarction 22 trial (PROVEIT-TIMI 22) demonstrated that galectin-3 values above 16.7 µg/L (median), measured within 7 days after acute coronary syndrome, was significantly associated with higher risk of HF development during 2-year follow-up, but elevated levels of this biomarker were observed mostly in patients with hypertension, diabetes, prior HF and prior MI [16]. Falcone et al. [17] analyzed a group of patients with angiographically documented coronary artery disease: unstable patients (n = 55) had higher galectin-3 levels in comparison to the stable subjects (27.75 ng/mL vs. 6.48 ng/mL, p < 0.001). Compared with these studies, we observed lower galectin-3 concentrations in our group of patients (median 13.0 ng/mL), which could be explained by our restrictive inclusion and exclusion criteria. Additionally, all subjects were successfully treated with pPCI with stent implantation — the best method for the prevention of adverse cardiovascular events, severe cardiac injury and remodeling processes. The parameter most frequently used for assessment of left ventricular dysfunction is EF, determined by echocardiography. In the literature, no significant or only weak correlation between galectin-3 levels and EF was demonstrated, which confirms our observation (r = –0.003, p > 0.05) [9, 16].

Galectin-3, a protein linking processes of inflammation and fibrosis, is often compared with other prognostic biomarkers in patients with HF [7–10, 12, 16]. Galectin-3 levels are relatively stable over time (independent of HF decompensation or HF treatment), whereas NT-proBNP is released in response to current myocardial stretch. In the NT-proBNP investigation of dyspnea in the emergency department (PRIDE) study, baseline galectin-3 level was a superior predictor of short and long-term mortality in patients with acute HF and only moderately correlated with NT-proBNP concentration (r = 0.39, p < 0.001) [7]. In another group of patients with severe chronic HF, galectin-3 measurement provided prognostic information for predicting survival, independent of natriuretic peptides [9]. No significant correlation between galectin-3 and BNP levels was observed in subjects with HF development after acute coronary syndrome [16]. In our study there was a weak relationship between 3 measured biomarkers: galectin-3, NT-proBNP and hsCRP, which support previous observations that these proteins reflect different pathways in the pathobiology of cardiac injury [1, 2, 7, 8, 9, 12, 16].

Galectin-3 has been validated as an independent long-term prognostic marker in patients with HF, but not in subjects in acute phase of MI without prior heart insufficiency. As previously demonstrated, we found that galectin-3 levels depend on age, gender, renal dysfunction and are elevated in patients with diabetes and chronic AF [6–9, 11, 12, 16, 18, 19]. After analyzing the appearance of clinical events during hospitalization, we observed a higher rate of new diagnosis of HF, new-onset AF, in-hospital infections and diuretics treatment, but not ventricular arrhythmias or pressor amines therapy in patients with galectin-3 concentration > 16 ng/mL. The novel observation of our study is a higher rate of new-onset AF in acute phase of MI in patients with elevated galectin-3 levels. Swartz et al. [20] have also observed the correlation between serum markers for collagen I and III synthesis and appearance of post-operative AF [20], which confirms that fibrosis processes play an important role in pathobiology of this arrhythmia.

To conclude, in the present analysis of a relatively homogeneous group of patients with first MI effectively treated with pPCI, with exclusion of other diseases able to modulate galectin-3 values, the new-onset AF during hospitalization was independently associated with elevated levels of galectin-3 (> 16 ng/mL). Although we did not observe an independent association of a higher rate of early development of HF with elevated galectin-3, such patients more often needed diuretic treatment due to clinical symptoms.

A limitation of our study is its small sample size. It is probably associated with the fact that only part of the subjects meeting our inclusion and exclusion criteria (first MI, no history of prior HF, absence of severe valvular impairment or other coexisting diseases) had elevated galectin-3 levels. Moreover, treatment with pPCI plays an important role in the prevention of cardiovascular events and development of HF after acute MI, which additionally influences our results.

Our study confirms the association between galectin-3 levels and patients’ age, gender, diabetes, permanent AF and renal dysfunction. Increased levels of this biomarker are independently associated with new-onset AF and diuretic treatment during hospitalization in patients with first acute MI treated with pPCI without prior HF. The only weak to moderate relationship between galectin-3, hsCRP and NT-proBNP indicates that galectin-3 reflects other pathways in the pathobiology of heart disease. Measurement of galectin-3 levels in acute phase of MI can provide additional useful information in this group of patients, particularly indicating subjects at a higher risk for AF development.

Conflict of interest: The first author has received speaker’s fees from bioMérieux, Poland.