Hyponatremia defined as serum sodium level < 135 mmol/L, is a common electrolyte abnormality in hospitalized patients, and it is associated with increasing morbidity and mortality.

In the last few years, several studies reported that plasma sodium level on admission is an independent predictor of increased rates of rehospitalization and mortality in patients hospitalized for HF [3–5], it is also associated with longer length of stay [1], and is more likely to require dialysis and inotropic agents [1]. However, the question whether there is a cause-and-effect mechanism remains unclear.

In most of these studies, patients were admitted in Cardiology wards. They had several differences with the patients usually admitted to internal medicine wards regarding the age, comorbidity and etiology of HF. In addition, most of these studies had not been designed to investigate exclusively the predictive value of hyponatremia in the clinical course of patients with HF.

Our aim was to determine the relationship between hyponatremia and prognosis in patients with HF admitted to internal medicine departments.

Patients were recruited through the National Registry of Heart Failure (RICA), supported by the Heart Failure-Working Group of the Spanish Society of Internal Medicine (SEMI-IC). The RICA Registry is an ongoing multicenter, prospective, cohort study that has been described elsewhere [6, 7]. This registry included consecutive and unique patients with HF according to the criteria of the European Society of Cardiology [8]. The patients were exclusively admitted to internal medicine wards of 52 public and private hospitals in Spain between March 2008 and October 2011. They were included on discharge after an ADHF, and then they were followed-up for 1 year, with visits at 3 and 12 months after inclusion.

The study protocol was approved by the Ethics Committee of the University Hospital “Reina Sofia”, Córdoba (Spain), and all patients provided their informed consent. Data were collected through a web site (https://www.registrorica.org), which contained the database, accessed with a personal password. Confidentiality was preserved since no personal data was stored, except date of birth and name initials to avoid data duplication.

Upon admission we obtained a comprehensive medical history and undertook a detailed physical examination. We assessed comorbidity with Charlson index (CCI) [9], basal functional status with Barthel index [10], and cognitive status with Pfeiffer questionnaire [11]. We also registered data of laboratory evaluation including levels of creatinine, urea, glucose, sodium, potassium and hemoglobin, complications during admission and prescriptions at discharge. We excluded patients whose laboratory data were not fully completed, patients without echocardiographic examination and patients who died during hospitalization. All patients in this study were followed for 90 days after discharge. For rehospitalized patients or those who died during follow-up, data on the cause of readmission or death were obtained.

The primary end-point was either first all-cause readmission, or death by any cause. Secondary end-points were the number of days hospitalized, and the presence of complications, such as worsening of renal function (defined by elevation of creatinine basal levels ≥ 2 mg/dL), hyperpotasemia (defined by elevation of serum potassium ≥5.5 mg/dL), acute confusional syndrome, urinary tract infections, pneumonia, and needing for blood transfusion, hemofiltration or needing for either inotropic or hypotensive drugs.

Cumulative event curves were estimated by Kaplan-Meier method and compared by Cox regression test. Differences and correlations were considered significant at p < 0.05.

We enrolled 973 patients (46.25% men) admitted for ADHF with a mean of 77.2 ± 8.8 years. Hyponatremia was present in 147 (15.1%) patients. Nobody had severe hyponatremia (serum sodium ≤ 120 mmol/L). Baseline characteristics of the patients are showed in Table 1. The patients with hyponatremia had significantly more global comorbidity measured by CCI and more frequency of renal failure. Levels of glucose, urea, creatinine, and potassium were significantly higher in the group of hyponatremia, and blood pressure was significantly lower.

Table 1. Baseline characteristics of the patients with or without hyponatremia. Values are given as number (%) or as median (interquartile range).

The patients (both normonatremics and hyponatremics) taking either angiotensin converting enzyme inhibitors or angiotensin receptor blokers were 76.7%, loops diuretics 81.2%, thiazides 10.9% and 53.4% were receiving beta-blockers. There were no differences between the two groups of patients.

Clinical complications and pleural effusion during admission were higher in the group of patients with hyponatremia (35.41%, p < 0.001). Findings are shown in Table 2. This group suffered more worsening of basal renal function, more hyperpotasemia, more need for vasoactive and hypotensive drugs, more need for hemofiltration, more frequency of acute confusional status, and more frequency of urinary infections than the group with normal sodium. Hyponatremia (OR 1.63, p < 0.01) and CCI (OR 1.08, p < 0.01) remained as significant independent predictors when entered into the adjusted logistic regression model as shown in Table 3.

Table 2. Clinical complications in heart failure patients with and without hyponatremia. Values are given as number (%) or as median (interquartile range). 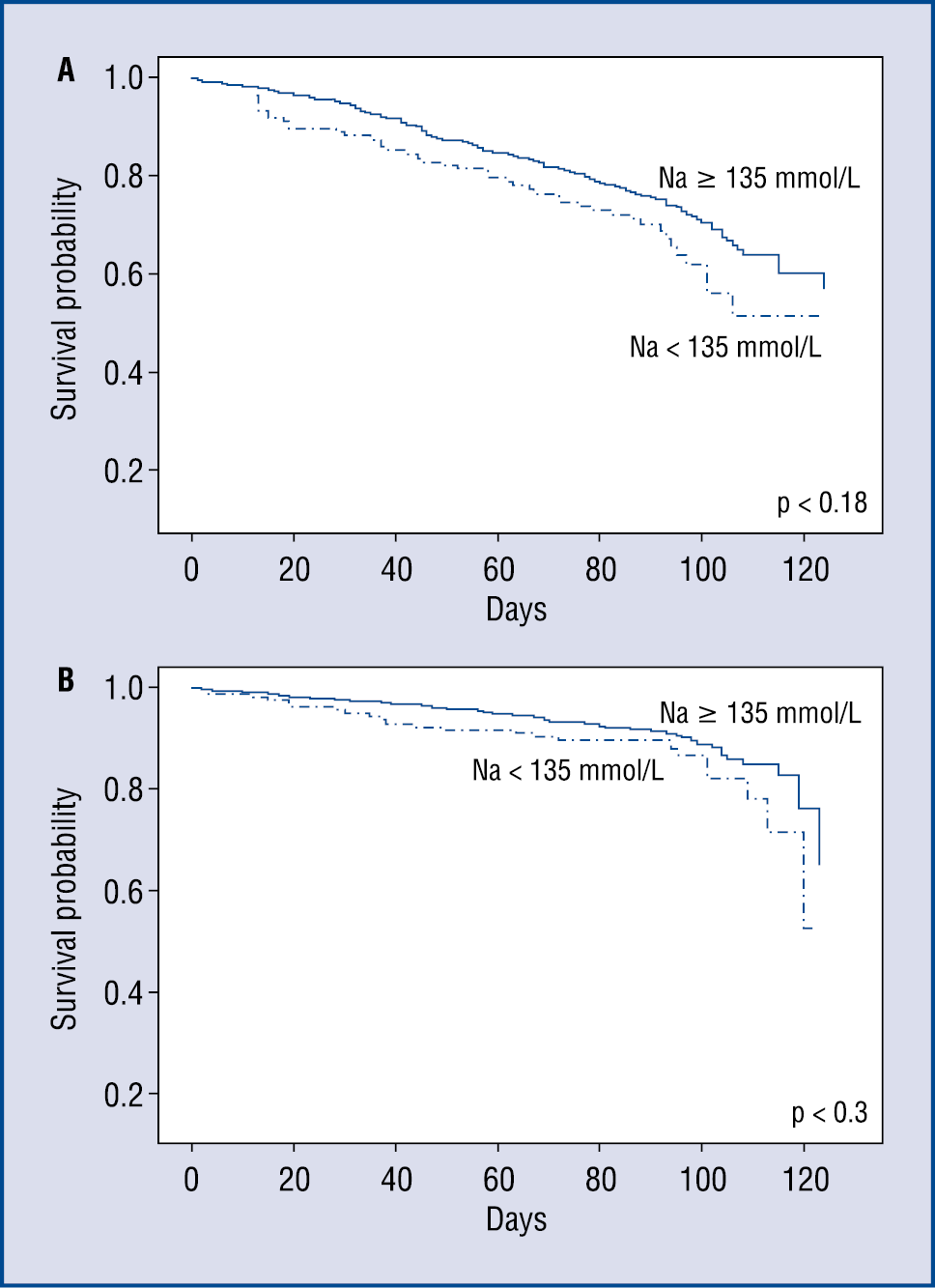 The main findings that our study showed, were that hyponatremia in HF patients was associated with more clinical complications during admission, but neither with short-term mortality nor its readmissions.

In our cohort, hyponatremia was present in 15.1% of patients with ADHF. This percentage was slightly lower than frequencies reported in other studies, which ranged between 20% to 25% [1, 12, 13] possibly because we did not include the patients who died during hospitalization. Low serum sodium was associated with more clinical complications during admission such as acute confusional status, worsening of renal function, need for vasoactive and hypotensive drugs, and with a higher length of stay, similar to previous studies [1], but also with more urinary infections. This finding has not been not previously reported and may be related to a wider use of urinary catheter for more strict control of diuresis in hyponatremic patients, how­ever, the urinary catheter is widely used in patients hospitalized for any cause, especially in patients with HF, therefore, more studies are necessary to confirm it. Mortality and readmissions were higher in patients with hyponatremia (20.7% vs. 11.4% and 22.4% vs. 17.5%, respectively). The differences are clinically relevant although there was no association in multivariate analysis.

Our sample includes a real-world cohort of internal medicine patients with ADHF, and dif­-fers from others in age (our patients were older with a median of 78–79-year-old), comorbiditiy (CCI higher than 3 points), and in a raised percentage of patients with non left ventricular systolic dimension (67.35% and 66.95% by group). Perhaps some of these differences might contribute to the higher mortality shown in this study.

Evidence suggests that the patients who have HF with preserved ejection fraction, are more likely to be older and to be female [14]. Older patients have a higher prevalence of comorbid illnesses than their younger counterparts, and in the setting of HF, age or sex differences have been demonstrated in left ventricular adaptation and autonomic responses, as well as in the clinical course and outcomes of the disease [15, 16].

The median age of patients enrolled in previous trials that researched the relationship between serum sodium in patients with HF and their prognostic was lower [1, 12, 13] and comorbidity measured by CCI was not included at all, although a recent study shows an increased comorbidity among patients with hyponatremia and HF [17]. In our sample, comorbidity was significantly higher in the patients with hyponatremia and was regarded as both significant and independent variable with clinical complications during admission and with a worse outcome (mortality and readmissions) at 90 days of follow-up (Table 5).

There are other studies that have shown that chronic comorbidities independently increase the mortality rates of patients with newly diagnosed HF [18] and also in ambulatory HF population [19]. In addition, there are other studies that showed a relationship between hyponatremia and a higher comorbidity measured by CCI [20]. In our study, in fact, CCI was higher in the hyponatremic group.

The association between underlying medical comorbidities measured by CCI and mortality in a variety of patients have been demonstrated in seve­- ral studies [9, 21, 22], however, there are only few of them that use it in the HF population. It could be postulated that there is not a true cause-and-effect between HF and hyponatremia, but a surrogate marker of comorbidity of these patients. Further studies will be needed to clarify this aspect.

Definitely, hyponatremia has shown to be a prognostic indicator of increased mortality in a determined group of patients with HF, as clinical trials were focusing on a relatively small segment of the HF population, however, in wider population, like ours, with older people who have more comorbidity, and more percentage of patients with preserved ejection fraction, this question remains to be investigated, likewise, future trials with hyponatremic patients and HF should include data of comorbidity to validate the results that we have obtained in this study.

Our present study has several limitations that must be considered. First, the number of patients included was lower than in other studies. In addition, all physicians are enrolled in RICA registry voluntarily, hence our cohort was obtained from patients admitted under the care of a group of specially committed physicians, particularly interested in HF, which could represent a sample bias. Finally, only admission serum sodium levels were considered, so differentials effects of persistent vs. corrected hyponatremia could not be determined. In addition, admission diuretic dose was not collected, consequently, potential association between diuretic dose and hyponatremia could not be examined.

In conclusion, in this study our real world sample has shown that hyponatremia is a predictor of complications while admission in HF patients, but it has also shown that comorbidity could play an important role in the presence or absence of hyponatremia and could even influence the 90 days mortality or admissions attributed to lower serum sodium. Furthermore, the relationship among both age and comorbidity and their association to survival in HF patients are likely more involved than previously described and demand validation in other studies that include a wide population.

All the investigators from RICA registry. This project was made possible by an unrestricted educational grant from Menarini Laboratories. Our thanks to the Registry Coordinating Center RICA “S & H Medical Science Service” for its work in quality control of data, logistical and administrative support.