Lack of normal atrial systolic function in patients suffering from atrial fibrillation (AF) decreases cardiac output by as much as 30% and may be symptomatic. AF increases the risk of stroke 5 to 8 times with a 2-fold higher risk of death [1, 2]. Treatment of AF currently involves strategies of sinus rhythm maintenance or control of ventricular rhythm frequency. Ablation is recommended in patients with symptomatic AF resistant to antiarrhythmic medications. Restoration of sinus rhythm is also recommended during valvular defect surgery or cardiac revascularization [3–5]. Application of at least 2 methods of monitoring increases the chance of detecting arrhythmia recurrence and facilitates decision-making concerning further anticoagulation, especially in asymptomatic patients.

The aim of this study was to evaluate short- and mid-term results of surgical radiofrequency (RF) ablation using transtelephonic electrocardiogram monitoring (TTM) during a 6-month follow-up. Furthermore, clinical and echocardiographic risk factors for arrhythmia recurrence were analyzed.

We enrolled 61 patients (41 males, 20 females, mean age 64.5 ± 8.7). Prior to cardiac surgery, persistent AF was found in 30 and paroxysmal arrhythmia in 31 patients. RF ablation was performed with Cardioblate 68000 generator from Medtronic. Left and right pulmonary vein isolation and ligation of the left auricle with Prolene stitches was done in all patients. A bipolar electrode was used in 40 (66%) patients. When a monopolar electrode was used, isolation of all openings of pulmonary veins was accompanied by creation of additional lines connecting pulmonary veins with one another and with the left auricle and of a ring in the vicinity of the P3 segment of the posterior mitral valve leaflet (Fig. 1). The ablation technique was chosen depending on the cardiac surgery procedure. Patients without contraindications were placed on 24-h amiodarone infusion with subsequent oral treatment for 3 months [4, 5]. Figure 1. Additional lines made in the course of endocardial ablation.

An analog telephone system was used by the patients to transmit the ECG signal once a week and in case of any rhythm disturbance or discomfort. Statistical analysis was performed with SAS 9.2® (SAS Institute Inc., Cary, NC, USA). Categorical data presented as frequencies and percentages were compared with the χ2 test or Fisher’s exact test as appropriate. Continuous data were tested for normal distribution with the Kolmogorow-Smirnov test. Normally distributed variables are presented as means ± standard deviation, whereas the median and the inter-quartile range are given for non-normal variables. The statistical significance of differences between normally distributed variables was checked with Student’s t-test and the Cochran-Cox test, depending on the homogeneity or heterogeneity of variation, respectively. In the case of non-normal distribution, the Mann-Whitney U test was used.

Multivariate logistic regression analysis with stepwise selection was done to identify prognostic factors for post-hospital AF (dependent variable). A significance level of 0.2 and 0.25 was required for a variable to enter and remain in the model, respectively. Zero hypotheses were verified with the assumed level of statistical significance of α ≤ 0.05. Two-tailed testing methods were applied.

The follow-up period was 193 ± 96 days. Follow-up was slightly shorter in 6 patients due to their late enrollment. Follow-up was terminated after 6 months from ablation in all patients. Cardiac surgery was performed for valvular defects in 24 (39%), ischemic heart disease in 24 (39%) (Table 1). These groups did not differ significantly as to the frequency of arrhythmia recurrence (Table 2). Other 13 patients were submitted to complex surgery. The number of telephone ECGs received was 36 ± 15 per patient and 2,198 ECG in total. 97 (4%) ECGs could not be analyzed. 299 ECGs revealed supraventricular arrhythmia. AF was observed in 29 patients with 3 episodes of atrial flutter and 1 episode of atrial tachycardia.

Early (during hospitalization) postoperative AF (POAF) events were observed in 29 (49.1%) patients during the 1st (11 patients, 18%), 2nd (8 patients, 13%), 3rd (5 patients, 8.5%) or ≥ 4th day (5 patients, 8.5%) after surgery. AF on the day of discharge was disclosed in 15 (25%) patients. The risk of early POAF was greater in patients with a history of persistent AF, critical stenosis of the right coronary artery, and surgical revascularization of coronary vessels with right atrial ablation (Table 3).

Early POAF proved to be a prognostic factor for future rhythm disturbances. Post-hospital recurrence of arrhythmia [group SR(–)] was observed in 21 (35%) patients, including 16 (76.2%) with early POAF. Preoperative persistent AF rather than paroxysmal AF (48.3% vs. 19.4%; p = 0.0176) was related to the failure of pulmonary vein isolation. Furthermore, the risk of unsuccessful ablation was greater in severe mitral stenosis revealed with echocardiography (p = 0.0268). There were more mitral valve surgeries (p = 0.0866) and more monopolar electrode procedures (p = 0.0325) in patients with AF recurrence. Moreover, intra-operative inotropes predisposed to AF (p = 0.0453). Reduction in the number of AF events was attributed to preoperative antiarrhythmic medication (p = = 0.0409) and to statin use (p = 0.0453, Tables 4, 5).

Table 4. Comparison of clinical and echocardiographic parameters in groups with stable sinus rhythm (SR+) and with post-hospital atrial fibrillation (SR–).

Multivariate logistic regression analysis for prediction of AF-free survival during a 6-month follow-up tested a number of models in which strongly correlated independent variables were verified separately. The following variables were included: type of AF (paroxysmal or persistent), POAF event, AF occurrence on the 1st day after surgery, regular sinus rhythm on discharge, use of monopolar electrode, significant mitral stenosis, mitral valve surgery, use of antiarrhythmic drugs prior to surgery, preoperative administration of statins, intraoperative use of inotropes, age, and aortic cross clamp time (Table 6).

Table 6. The independent predictors of survival without post-hospital atrial fibrillation.

Regular sinus rhythm on discharge, time of aortic clumping, significant mitral stenosis, and inotropes intraoperatively (in declining order of strength) were independent predictors of AF-free survival (area under ROC = 0.906, Fig. 2). AF type (paroxysmal or persistent) and surgery procedure (coronary artery bypass grafting or valve repair) were excluded as independent predictors of AF. How­ever, it should be noted that the relatively small number of patients in the study group resulted in extended confidence intervals for odds ratios. 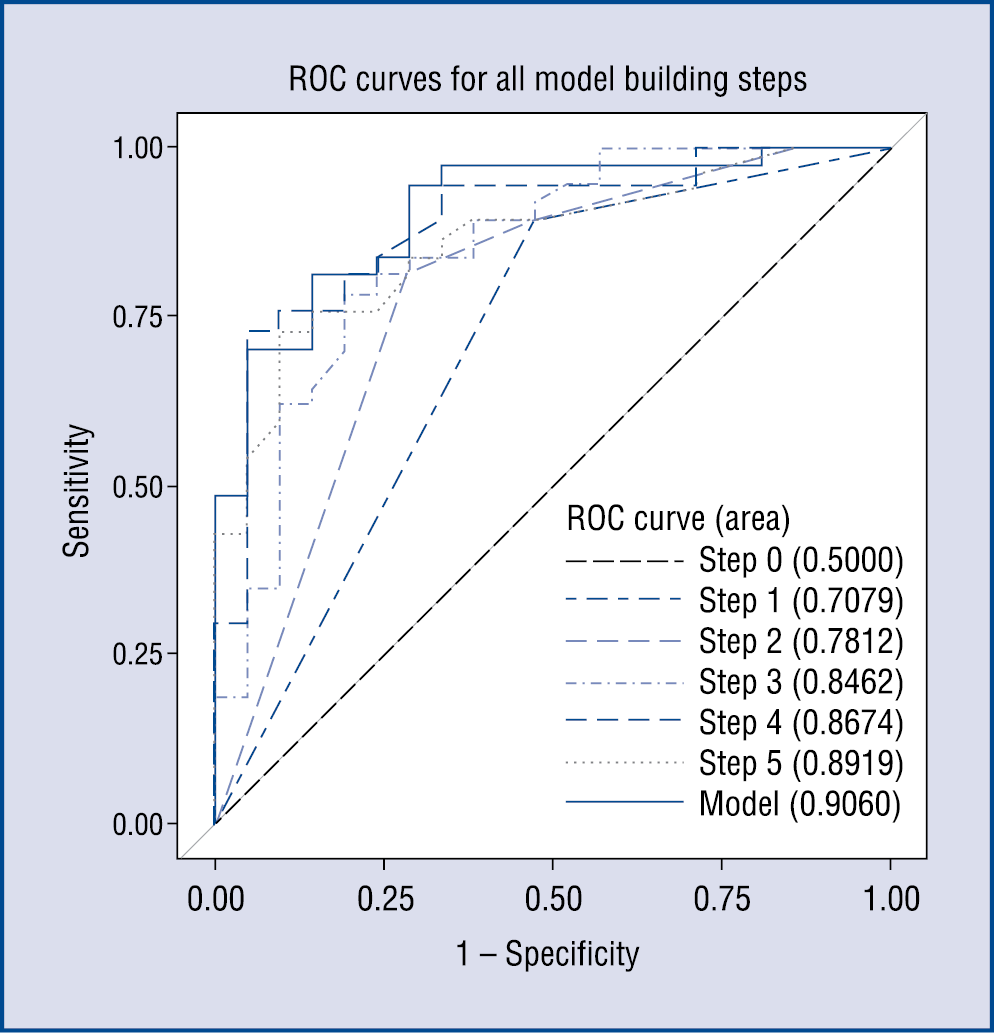 The present findings and other reports demonstrate that complex monitoring of patients following cardiac ablation should be routine. For example, Piorkowski et al. [6] found that the efficacy of ablation decreased from 70% on the basis of symptoms to 50% or 45% with 7-day Holter ECG or TTM, respectively. The importance of monitoring is underscored by observations that paroxysmal AF, which is often asymptomatic, is associated with the same risk of thrombo-embolic complications as permanent arrhythmia [7, 8]. Consequently, assessment of the efficacy of ablation will steer the decision concerning continuation of oral anticoagulants.

We were unable to find studies analyzing the effects of surgical RF ablation with regular (weekly) telecardiometry. In the present study, the number of teletransmitted electrocardiograms averaged 36 per patient, surprisingly more than the expected 26. The usefulness of TTM was corroborated by the uncomplicated nature of the telephone adapter and by the small percentage (4%) of distorted electrocardiograms.

It is estimated that the success of RF ablation ranges from 40% to 90% [9–11]. The SAFS study [12] in 100 patients disclosed sinus rhythm in 75% of the patients after 6 months from ablation but with the 7-day Holter ECG the success rate decreased to 62%. Arrhythmia was not observed in 40 (65%) patients of our study group.

Occurrence of early POAF portends an unfavorable prognosis since it is associated with a longer period of hospitalization and higher postoperative mortality. According to Echahidi et al. [7], POAF is observed in 50% of the patients undergoing complex operative procedures. POAF is the most frequent postoperative complication and usually occurs between the 2nd and 4th day following the procedure. In our study, POAF occurred on the 1st and 2nd day in almost half of the patients. Due to multiple causes of early POAF, cardiology societies emphasize the importance of prevention and elimination of factors implicated in POAF. Decisions must be made with care because recurrence of arrhythmia during the first 3 months after ablation (blanking period) does not necessarily prove the procedure to be unsuccessful.

Permanent arrhythmia turned out to be a condition predisposing to late recurrence (p = 0.0176, Table 4), whereas early recurrence of POAF was an unfavorable prognostic factor (p = 0.0012). Similar findings were reported by Maroto et al. [13]. Preoperative use of antiarrhythmic drugs and statins in our patients resulted in less frequent recurrence of arrhythmia. The ARMYDA-3 study showed that statins reduced the incidence of POAF [14, 15]. Statins are recommended for prophylaxis of arrhythmia in patients following coronary artery bypass grafting, irrespectively of heart valve surgery. However, other reports are not unequivocal concerning the role of statins in secondary prevention of tachyarrhythmia. For this reason, the European Society of Cardiology omits statins in its guidelines for this condition [16].

Oral amiodarone prophylaxis was predictive for POAF in our patients. In other studies, atrial and ventricular function improved in patients in whom SR was restored with extensive AAD therapy before ablation. Probably due to this fact, the recurrence of POAF was reduced [17–19]. Despite many reports on the efficacy of surgical isolation of pulmonary veins accompanying mitral valve surgery [19, 20], mitral stenosis was found by us to be an independent and distant factor for unsuccessful ablation (p = 0.0268). The use of the monopolar electrode significantly increased the rate of late recurrence of tachyarrhythmia (p = 0.0325). However, it should be emphasized that this subgroup had a slightly higher EUROSCORE and a longer history of arrhythmia. Similar findings were reported by Sielicki et al. [21].

In conclusion, TTM should be a routine recommendation in patients who underwent surgical RF ablation, allowing for effective disclosure of rhythm disturbances. From the patient’s point of view, TTM gives the feeling of greater control and the possibility to obtain immediate physician’s advice.

The present paper has several limitations. The study was done on a heterogeneous group of patients regarding the type of pathology and technique for surgical ablation. However, our patient characteristics match those in other studies on AF ablation. A TTM system was used for rhythm evaluation once per week and in case of symptoms or discomfort. In our opinion, this approach during 6 months from ablation constitutes an optimal monitoring method. Seven-day Holter ECG, although effective, is not a perfect tool either (long intervals). Combination of several methods could undoubtedly allow for better detection of arrhythmia episodes. It has been suggested that recurrences during the blanking period (usually 3 months after ablation) are not representative for the final clinical outcome (in our paper 20 out of 21 patients have had AF burden during this stabilization period as well as in the 6-month follow-up period). Moreover longer follow-up (e.g. 1 year) could have demonstrated different rates of recurrence. In our study extensive AAD therapy before ablation have resulted in a lower recurrence of post procedure AF. Although it has been confirmed in other studies published on AF ablation it also needs extended observation. Such echocardiography parameters like area or volume should also be calculated due to better left atrium assessment.

Surgical RF ablation constitutes an effective method of treatment of AF (65% success rate) in patients subjected to revascularization and/or correction of heart defects. Electrocardiography teletransmission proved to be a useful tool for monitoring cardiac rhythm in patients with AF who underwent isolation of pulmonary veins during cardiac surgery. Ablation within both atria did not decrease the number of late recurrences of arrhythmia. Early recurrence of arrhythmia, severe mitral stenosis, as well as application of a monopolar electrode and inotropes were associated with reduced success rate of ablation. Preoperative administration of antiarrhythmic drugs significantly reduced the number of AF events. Treatment with statins prior to surgery and during follow-up was associated with a tendency to reduced number of AF events.