Comorbidity is the occurrence of concomitant disease in addition to an index disease of interest or the simultaneous occurrence of multiple diseases in an individual. Lung cancer is associated with age and smoking, and both age and smoking are strongly associated with comorbidity. Lung cancer is the most common malignancy in the world. Comorbidity, such as diseases of cardiovascular, pulmonary and other systems may influence prognosis in lung cancer as well as complicate its treatment. In this paper we tried to conclude the significance of the individual comorbidities in lung cancer and their impact on particular treatment method.

For many years, cancer patients have been staged by the size of their tumor while how sick they are because of the tumor and other medical conditions was neglected. The present system of cancer classification does not consider the important patient-based prognostic factors, such as the general health of the patient, defined as the number and pathophysiological severity of coexisting diseases, illnesses, or conditions [1]. These conditions and diseases, which exist before cancer diagnosis and are not adverse effects of cancer treatment, are generally referred to as comorbidities [2]. During a routine treatment selection process and clinical decision-making, comorbidity is generally not considered in the design of cancer data sets or included in observational research. In many cases, comorbid health problems are so severe that they impact directly on survival and prohibit the use of preferred antineoplastic therapies. Precise comorbidity information, along with patient demographics, behavioral risk characteristics, site of cancer, and morphologic stage of the tumor, is essential for comprehensive risk adjustment in cancer. Accurate risk adjustment is necessary for observational and health services research, including comparison of outcomes of different treatments and quality assessment [1−8].

Lung cancer is the most common malignancy in the world. It is one of the main causes of death among men between 50 and 70 years of age [9]. It is the most common cancer in men and second in women but according to mortality due to cancer it takes the first place in both sexes. On the basis of the histopathological classification, lung cancer is divided into two main groups: (1) small cell lung cancer (SCLC), representing about 20% of cases, and (2) non-small cell lung cancer (NSCLC), which consists of approximately 75% of all lung tumor diagnoses. Histologically, NSCLC is divided into the following subtypes — squamous cell carcinoma of lung (SCC), adenocarcinoma (AC) and large cell carcinoma (LCC) [10]. Comorbidity, such as diseases of the cardiovascular, pulmonary, and other systems may influence prognosis in lung cancer as well as complicate its treatment [11]. The aim of this review is to comprehensively narrate the comorbid conditions that often coexist with lung cancer, along with their reported prevalence and their significant impacts in the disease survival and management.

Cancer survival mainly depends on patient characteristics, the histology and pathology of the tumor, stage at diagnosis, host-tumor interaction, and comorbidities. Comorbidity has an influence on each patient’s initial treatment and the treatment effectiveness of patient care. Previous studies have demonstrated that less aggressive treatment is given to patients with breast cancer, prostate cancer, lymphoma, or lung cancer who have specific existing comorbidities [12−17]. Several diseases such as hypertension, ischemic heart disease, cerebrovascular disease, chronic obstructive pulmonary disease (COPD), and diabetes mellitus (DM) are considered to have a significant influence on the survival of cancer patients and thus overall lung cancer population [11, 13, 18]. 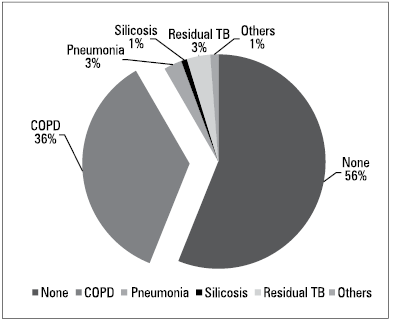 The presence of comorbidity in lung cancer patients increases with age. The increasing mean age of the population will therefore increase the number of patients diagnosed with one or more other serious diseases at the time of cancer diagnosis. Age occurs to be a strong negative prognostic factor similar to tumor stage and patient performance status [24]. However according to resection status, Pei et al. [25] study results of the postoperative complications after lung resection for NSCLC in elderly patients are encouraging. Here pulmonary resection for NSCLC in patients older than 70 years showed acceptable morbidity and mortality. According to systemic NSCLC treatment, age may limit chemotherapy use for elderly patients [26].

Chronic obstructive pulmonary disease (COPD) is a major burden throughout the world. It is associated with a significantly increased incidence of lung cancer and may influence treatment options and outcome thus these diseases share common risk factors, COPD is the most common lung cancer comorbidity. The frequency of these diseases co-existanse was 52% in Islam et al. [27] study which assessed almost 5,683 patients. Impaired lung function confirming COPD is an independent risk factor for lung cancer [28−31]. Oxidative stress and inflammation may be a key link between COPD and lung cancer developement. COPD negatively influences possibility of radical treatment delivery options. According to Iachina et al. [32] patients with NSCLC and COPD have a 20% excess mortality than patients without this comorbidity.

Co-existance of lung cancer and COPD does not rule out the possibility of surgery. A recent review concerning surgical treatment of lung cancer patients with COPD suggests milder criteria for surgical resection with curative intent, because limited surgical resections or nonsurgical therapeutic options might provide inferior survival compared with resection complications risk [31]. In these patients physiotherapy represents an important part of preoperative and postoperative treatment [33].

Some authors reported that cardiovascular diseases have a negative effect on survival and mortality. The death rate frequency is 30% higher compared to cancer patients without this comorbidity [32]. This comorbidity worsen the surgical outcome. In patients who undergo surgery for stages I and II NSCLC it is also unfavourable survival marker [35−37]. On the other hand, several authors reported that cardiac comorbidity is not a risk or has little risk for mortality and morbidity following surgery for primary NSCLC [38−41]. What is more, some of these studies claim that the preoperative cardiovascular comorbidities, which included hypertension, cerebrovascular disease and coronary arteries disease and affected 71% of patients, didn’t have impact on postoperative complications.

Cerebrovascular disorders belong to CVDs and as a comorbidity need particular attention, because their presence increase mortality rate to 20% in NSCLC patients in comparison to those without this comorbidity [32]. It is very unfavourable prognostic factor for elderly patients undergoing thoracosurgical operation due to lung cancer. According to Dominguez-Ventura [42] study, previous stroke history in patiens ≥ 80 years of age, increased fourfold risk of death. Cerebrovascular diseases had also a negative prognostic effect for those with extensive-stage SCLC [43].

There are many data concerning diabetes impact on worse cancer prognosis [44−55]. The occurrence of diabetes in lung cancer patients was 15.7% in Islam et al. [27] study. According to lung cancer, in Iachina et al. [32] patients with NSCLC and diabetes had a 20 % excess mortality than patients without this comorbidity. Shieh et al. [56] study revealed also elevated risk of mortality in lung cancer diabetic patients which suggest they deserve greater attention while undergoing cancer treatment .

Worse prognosis in diabetes co-existance may be caused by biological mechanisms related to hyperglycemia, hyperinsulinemia and inflammation which result in tumor cell proliferation and metastases [47−49, 55].

Other unfavourable factors, due to diabetes-related comorbidity, include less aggressive cancer treatment [57], poorer response to cancer treatment [51–55], presentation with later-stage cancer due to suboptimal cancer screening practices and other preventive health-seeking behavior [58].

It is worth mentioning that there is some promising information about diabetes metformin treatment and lung cancer survival [59−62]. According to these studies metformin is associated with improved survival among diabetic patients with NSCLC, suggesting a potential anticancer effect of this drug.

In general, the decision for lung cancer surgery should not be determined by patients’ age. According to a US large-scale study based on patients survival, outcomes for the subgroup aged 70–79 years are similar to those of the subgroup aged 80 years and older when patients receive single-modality local therapy [63]. There are some researchers assessing complication rates and risk factors in octogenarian lung cancer patients [42, 64−66]. Aoki et al. [65] investigated 35 patients aged 80 years and over who underwent pulmonary resection, and demonstrated an operative mortality rate of 0% and a morbidity of 60%. Port et al. [66] reported a perioperative mortality rate of 1.6% and a morbidity of 38% in the same age group. Dominguez-Ventura et al. [42] showed that mortality occurs in 6.3%, and postoperative complications occur in 48% of octogenarian lung cancer patients, with the risk factors of male gender, symptomatic lung cancer with haemoptysis and previous stroke.

Although surgery offers the best chance of a cure for early stage NSCLC, postoperative morbidity and mortality, continue to be a major concern for thoracic surgeons after surgical resection of NSCLC. Improving the surgical outcome requires knowledge of the risk factors prior to surgery and that of postoperative mortality and morbidity. Preoperative comorbidities are reported to be associated not only with postoperative complications [35, 40, 70, 71] but also with increased incidence of extended length of stay after NSCLC resection [72]. Particular risk factors in lung cancer which affects surgical outcome presents Table 2.

Patients with advanced lung malignancies often require cardiotoxic treatments. Increasing severity of co-existing comorbidity may increase the toxicity of specific treatments and may sufficiently shorten remaining life expectancy to cancel therapy profits. It is also possible that the negative prognostic impact of severe comorbidity is actually due to the use of aggressive therapy. Due to that, patients with multiple medical comorbidities, often in decompensation, do not receive appropriate therapy. This cessation make difficult to recognize whether the decrease in survival is due to the comorbidity or less aggressive treatment.

The comorbidities impact on the systemic anticancer treatment is poorly assessed. On this issue there are no good data with a high level of evidence and literature is often limited to experts’ opinion and to case reports [77]. In spite of this there are some studies which provide data concerning inoperable patients. It is proved that chemotherapy and chemoradiation declined with increasing comorbidity and in particular increasing age [24].

In Aarats et al. [43] study older patients with L-SCLC were less likely to be treated with CRT (chemoradiotherapy), intensive chemotherapy, and PCI (prophylactic cranial irradiation). Treatment response and survival rates were lower with advancing age, but this may be attributed to poor performance status and suboptimal treatment rather than age.

in conclusion, comorbidities are frequent in patients with lung cancer and have a great impact on their survival. Obtaining lung cancer comorbidity impact information is difficult as this particular cancer has one of the worst survival outcomes, thus is prognostically less informative [78]. It is impossible to omit comorbidity evaluation in choosing appropriate anticancer therapy. Because comorbidities impact on anticancer treatment is still poorly assessed, there is a strong need for improving our knowledge in that field. Comorbidity information can be added to staging systems or incorporated into decision making programs to aid in patient consultation, improve patient decision making and match more individual therapy.