Submit an article Guide for Authors Ahead Of Print Author statement Editorial Policy and Information for Authors Reviewers 2019
A case of systemic melioidosis: unravelling the etiology of chronic unexplained fever with multiple presentations

A case of systemic melioidosis: unravelling the etiology of chronic unexplained fever with multiple presentations

Melioidosis, caused by the environmental saprophyte, Burkholderia pseudomallei, is an important public health problem in Southeast Asia and Northern Australia. It is being increasingly reported from other parts, including India, China, and North and South America expanding the endemic zone of the disease. We report a case of systemic melioidosis in a 58-year-old diabetic, occupationally-unexposed male patient, who presented with chronic fever, sepsis, pneumonia, pleural effusion and subcutaneous abscess, was undiagnosed for long, misidentified as Pseudomonas aeruginosa infection elsewhere, but was saved due to correct identification of the etiologic agent and timely institution of appropriate therapy at our institute. A strong clinical and microbiological suspicion for melioidosis should be considered in the differential diagnosis of acute pyrexia of unknown origin, acute respiratory distress syndrome and acute onset of sepsis, especially in the tropics.

Melioidosis or “the remarkable imitator”, an acute infectious disease, caused by the environmental Gram-negative bacillus, Burkholderia pseudomallei, is endemic, widespread and an important public health problem in Southeast Asia and Northern Australia [1, 2]. It is being increasingly reported from other parts of the world, including India, China, Sri Lanka, and North and South America expanding the endemic zone of the disease [3, 4].

We report a case of melioidosis in a diabetic, occupationally unexposed male, who presented with chronic fever, sepsis, pneumonia, pleural effusion and subcutaneous abscess, was undiagnosed for long, misidentified as Pseudomonas aeruginosa infection elsewhere, but was saved due to correct identification of the etiologic agent and timely institution of appropriate therapy at our institute.

A-58-year-old male, office employee, was admitted to our hospital in mid-September 2015 with a history of unremittent high-grade fever with intermittent cough and expectoration for 3 months, a progressively increasing swelling on posterior left chest wall for two months, right-sided pleuritic chest pain for one month, and shortness of breath for 2 weeks. He had decreased appetite and progressive loss of weight for the past one month. He was a known diabetic since 20 years managed with oral hypoglycaemic agents. There was no history of travel outside his place of residence in the preceding 6 months of his onset of symptoms. However, when probed, the patient provided a history of renovation of his toilet 15 days prior to the onset of symptoms, for which he was going to open fields for defecation, though with proper footwear.

Prior to his admission at our hospital, he had consulted four different hospitals and received several broad-spectrum antibiotics including carbapenems and antipseudomonal antibiotics based on the culture isolate of Pseudomonas aueroginosa in the diagnostic pus aspirate from the chest wall swelling performed in the hospital he visited last. Empirical antitubercular therapy was also started in one of the hospitals, but was discontinued after a few days owing to gastrointestinal toxicity. Thus, despite a reasonable duration of antimicrobial therapy, he remained febrile with high temperature spikes (> 39°C) and his general condition progressively worsened.

Physical examination revealed a thin-built anemic man, conscious, but too sick and debilitated to take interest in the surrounding. He had weight loss of 7 kg since the start of his symptoms. Admission vital parameters were deranged with heart rate 120/min, blood pressure 108/66 mm Hg, respiratory rate 26/min, oral temperature 40.0°C and oxygen saturation of 96% at room air. Patient had a pyogenic extra-thoracic abscess of 7 × 4 cm at left infra-scapular area. Chest auscultation revealed diminished breath sounds in right basal area with inspiratory crackles. Other systemic findings were normal.

Contrast enhanced computed tomogram (CT) of the thorax showed bilateral pleural effusions (right more than left), and left chest wall abscess without any pleuro-abscess communication (Fig. 1A). Soft-tissue window showed mediastinal lymphadenopathy and bilateral peripheral lung nodules with cavitations consistent with septic pulmonary emboli (Fig. 1B). A diagnosis of septicaemic bronchopneumonia with bilateral pleural effusions was made. Aseptically drained pus along with blood, urine, sputum, and pleural fluid (1.5 ml, right side aspirate) were subjected to microbiological investigations, including culture. The patient was commenced on empiric therapy with parenteral antibiotics (ceftazidime, 2 gm IV 8-hourly, and levofloxacin 750 mg IV once-daily) as these antibiotics were not used earlier. 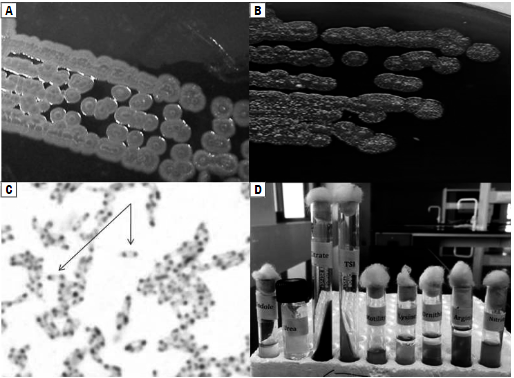 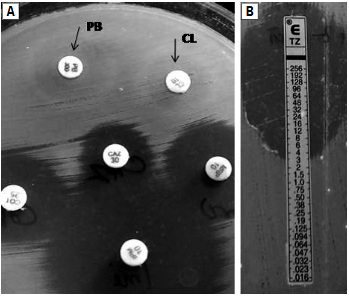 Figure 3. Antibiotic susceptibility of Burkholderia pseudomallei demonstrating (A) resistance to Polymyxin B 300U (PB) and colistin 10µg (CL) disks, and (B) Ceftazidime MIC (3µg/ml ) by Etest

Once the culture report was available, ceftazidime was continued as intensive therapy (2 gm IV 8-hourly) for a prolonged duration of 3 weeks followed by weight-based oral cotrimoxazole (Trimethoprim 240 mg and Sulfamethoxazole 1200 mg) twice daily as maintenance therapy. Glycemic control alongwith correction of anemia and hypoalbuminemia was optimized with insulin therapy and transfusion of packed red blood cells and fresh frozen plasma respectively. Clinical improvement was noted within a week of ceftazidime therapy. A repeat blood culture after seven days of ceftazidime therapy was sterile. The patient was discharged from the hospital on 24th day of admission with advice to continue cotrimoxazole for at least six months. On the last review visit, the patient was totally asymptomatic with complete recovery from the lesion.

Melioidosis was first recognized as a clinical entity in 1911 when Indian Bacteriologist C.S. Krishnaswami, under the guidance of the pathologist Alfred Whitmore described a “Glanders-like disease” among the morphine addicts and vagabonds found dead in the streets of Rangoon (Yangon), Burma (Myanmar) [6]. The first indigenous report of melioidosis from India was by Raghavan et al., from Mumbai in 1991 [7]. Since then, cases of human melioidosis have been reported from several Indian states [8].

Humans acquire the infection by inhalation of contaminated dust or droplets, ingestion of contaminated water, or contact with contaminated soil especially through skin abrasions [1, 2]. People with occupational or recreational exposure to moist soil or surface water such as rice farmers, other agricultural workers, building site labourers, adventure travellers, soldiers and immigrants are at greatest risk [1, 4]. Nearly 75 to 81% of cases occur during the rainy season [4]. The incubation period may range from days to many years; generally symptoms appear 2−4 weeks after exposure [1, 4]. The disease can remain dormant for years and can activate many years after the initial exposure, causing diagnostic confusion [9]. Additionally, the causative agent displays inherent resistance to most of the commonly used antibiotics, penicillin, ampicillin, first-generation and second-generation cephalosporins, gentamicin, tobramycin, streptomycin, and even to polymyxin; limiting the treatment options [4].

Although healthy people may get melioidosis, the major risk factors include diabetes, heavy alcohol use, chronic pulmonary disease, chronic renal disease, thalassemia, glucocorticoid therapy, and cancer [3]. The causative bacterium is widely present in soil up to a depth of 25−45 cms in the endemic regions. Their movement to the surface with the rising water table during the rainy seasons has been proposed responsible for its increased transmission rates [10]. Our patient was diabetic and developed infection in the rainy season, but was without occupational exposure to soil or water. It is possible, however, that he acquired the infection either by percutaneous inoculation by minor trivial trauma or aerosolisation of bacteria during exposure to the ongoing household construction work or use of open field for defecation.

The clinical spectrum of B. pseudomallei infection is extremely broad, ranging from asymptomatic infection, localized skin ulcers or abscesses, chronic pneumonia mimicking tuberculosis, and fulminant septic shock with abscesses in multiple internal organs [2−4]. Acute sepsis is the most serious, accounting for up to 60% of infections. Bacteremic dissemination is frequent and presents as multifocal pneumonia, subcutaneous abscesses, abscesses in solid abdominal visceral organs, septic arthritis, osteomyelitis, and septicaemia. On chest radiographs, diffuse nodular infiltrates often develop throughout both lungs and they coalesce, cavitate, and progress rapidly, to caseous necrosis and multiple metastatic abscess formation [3, 11, 12]. Mortality rate can reach as high as 95% in absence of effective intervention, and 50% even after antibiotic therapy [3, 12].

The remaining 40% patients have localised infections, most frequently in the lung (manifesting as mild bronchitis to severe pneumonia), and abscesses or granulomata in any organ system like cutaneous and subcutaneous abscesses, lymphadenitis, osteomyelitis, septic arthritis, liver and/or splenic abscesses, cystitis, pyelonephritis, prostatic abscesses, epididymo-orchitis, and brain abscesses [3, 8]. As evident, the clinical symptoms of melioidosis mimic those of many other diseases; thus, differentiating between melioidosis and other acute and chronic bacterial infections, including tuberculosis, is often difficult. Many patients presenting with prolonged fever, weight loss, and suspicious chest radiographic findings, are misdiagnosed as tuberculosis and may get anti-tubercular therapy [13] as in the present case. Around 11% of the cases present with chronic melioidosis defined as illness with symptoms for longer than 2 months’ duration on presentation [3, 4]. Fifteen percent of chronic melioidosis cases present with pleural effusion [14]. The present case had acute septicaemic melioidosis, with widespread dissemination to lung (pneumonia) and subcutaneous tissue (abscess), remained undiagnosed for long, and subsequently progressed to chronic pleural involvement with pleural effusion. The CT thorax showing widespread bilateral peripheral lung nodular opacities bears evidence to disseminated ‘blood-borne pneumonia’ in the present case.

In tropics, melioidosis should be considered in the differential diagnosis of acute pyrexia of unknown origin, acute respiratory distress syndrome and acute onset of sepsis, especially if presenting during rainy season, if multiple pustular or necrotic skin or subcutaneous lesions develop, or if there is a radiologic pattern of tuberculosis from which tubercle bacilli cannot be demonstrated. A delay in diagnosis can be fatal, since empirical antibiotic regimens used for suspected bacterial sepsis often do not provide adequate coverage for B. pseudomallei. However, a delay in the identification of B. pseudomallei or a misidentification as another species (most commonly, Pseudomonas species or as a contaminant in culture) is not uncommon in laboratories that are unfamiliar with this organism [15]. It is extremely important to monitor the patients for at least one year after completion of therapy because of the risk of recurrence. Recurrent melioidosis occurs in approximately 1 in 16 patients, often in the first year after the initial presentation. Roughly a quarter of recurrences are due to reinfection, with the remainder due to relapse from a persistent focus of infection [4].

In October 2012, B. pseudomallei was upgraded to a Tier 1 Select Agent by the Centers for Disease Control and Prevention resulting in increased research and understanding of melioidosis [3]. With the expansion of endemic zone of the disease into previously considered non-endemic regions, high degree of suspicion and vigilance on the part of both microbiologists and clinicians is need of the hour for an early and accurate detection of the organism and decreasing case fatality.