The clinical differences of asthma in patients with molds allergy

Introduction: Bronchial asthma is an increasing problem worldwide. The course of bronchial asthma is dependent on the type of inducing allergens. The differences between the clinical features of asthma in patients with monovalent allergies to molds and with other allergies were explored.

Material and methods: Randomly selected 1910 patients (924 women and 986 men) between 18−86 years in age were analyzed according to type of allergy and asthma. The diagnosis of asthma was confirmed on the basis of GINA criteria, physical examination and spirometry. Allergy diagnosis was confirmed on the basis of medical history, a positive skin prick test and the measurement of serum-specific IgE to inhalant allergens, using an extended profile of mold allergens.

Bronchial asthma is an increasing problem in all age groups. According to the WHO, between 100 and 150 million people around the world suffer from asthma, and this number is rising. Worldwide, deaths from this condition have reached over 180,000 annually [1]. There are a number of documents relating to the diagnosis and treatment of bronchial asthma, but our knowledge is incomplete in some fields [2−4]. The natural course of asthma is dependent on many factors, such as the type of inducing allergens. The majority of the available literature is devoted to mites, pollen and professional allergens, while less attention has been paid to animal (except cats) or mold allergens. Molds are extensive source of allergens. Exposure and sensitization to fungal allergens can promote the development and worsening of allergic diseases. Although numerous species of fungi have been associated with allergic diseases in the literature, the significance of fungi from the genera Alternaria, Cladosporium, Penicillium, and Aspergillus has been well documented [5].

The clinical spectrum of hypersensitivity reactions elicited by molds is very broad; in addition to IgE-mediated type I allergies, it includes type II, III and IV reactions, which are defined according to the criteria proposed by Coombs and Gell [6]. Clinically, IgE-mediated sensitization to mold allergens can manifest as allergic rhinitis and rhinosinusitis, atopic dermatitis and allergic asthma [6].

Some information has been published regarding the differences in the nature of asthma in patients with allergies to molds [6, 7]. However, we still lack detailed information on this issue. Additionally, the precise prevalence of fungal sensitivities remains unclear.

The aim of this study was to attempt to assess the differences between the clinical features of asthma in patients with monovalent allergies to molds and those with other allergies. This could be the starting point to draw attention to the special needs of these patients.

32 654 patients from Outpatient Allergological Clinics were prescreened in data bases. 1910 subjects: 924 women and 986 men between 18−86 years were randomly selected. They were analyzed according to their types of allergy and asthma.

The diagnosis of asthma was based on GINA criteria [2], physical examination and spirometry with a positive result on the reversibility test (Lung test 1000). A positive test result was defined in accordance with the criteria of the ATS-ERS [8, 9]. Before testing, the patients did not use short-acting beta2 agonists for 8 hours, ipratropium derivatives or theophylline derivatives for 24 hours, long-acting beta2 agonists for 48 hours, and tiotropium derivatives for 72 hours. Smokers were asked to abstain from smoking for 1 hour before testing. The test was deferred for 4 weeks in cases of respiratory tract infections.

The allergy diagnosis was confirmed on the basis of history, positive skin prick tests (SPT) and measurements of concentrations of serum-specific IgE (sIgE) in response to inhalant allergens.

The response of serum immunoglobulin levels (serum sIgE) to all mentioned allergens were measured using the Phadia Laboratory System (Phadia AB, Uppsala, Sweden), an immunoenzymatic test. The results were assessed as positive when the serum sIgE concentration was > 0.75 IU/ml (class II according to the manufacturer’s brochure) [10]. After the initial analysis, 1475 patients with allergies and/or asthma were classified into four groups:

— Patients with monovalent allergies to pollens (grass and/or trees and/or mugwort), group P.

The monovalent allergy was confirmed as followed: typical clinical symptoms (positive result of original questionnaire), positive skin prick test and/or allergen specific IgE to any allergen mold and negative results to other analyzed, inhalant allergens. Other monovalent allergies were diagnosed in a similar way.

The characteristics of the groups are shown in Table 1.

Table 1. Characteristics of the study groups

Each subject completed the Asthma Control Test (ATC) [11] and an original questionnaire about mold allergies (Table 2).

The study was approved by the local ethics committee (Medical University of Silesia, Katowice, Poland). All patients signed an informed consent form.

Data with a normal distribution, such as participant age, disease duration and spirometric test results were compared using Student’s t-test for independent samples. Odds ratios were calculated to assess the likelihood of asthma in the presence of a particular trait in the subjects. Kruskal-Wallis test was used to compare non-parametric variables between the groups. P < 0.05 was considered statistically significant.

Patients with monovalent allergy to molds represented 4.3% of all respondents with inhalant allergy. The original questionnaire about mold allergies indicated the special importance of patient exposure to damp basements (89% of the patients with allergies to mold answered YES to the second question and the questions about steamy bathrooms; 86% of respondents answered YES to the third question) in describing the symptoms of allergies to mold fungi. The questionnaire results from the control groups without allergies to molds were significantly negative in relation to the study group for all of the targeted questions.

In group M, patients with diagnoses of varying degrees of bronchial asthma had similar profiles to those with mold allergies. However, patients with allergies to Aspergillus fumigatus and Trichophyton mentagrophytes were significantly more likely to suffer from severe asthma. The detailed results are shown in Table 3.

Table 3. Profile of mold allergies in group M (% of patients) according to asthma severity

Additionally, patients with an allergy to Alternaria alternata had an odds ratio of 2.11 (95%CI: 1.86−2.32) of receiving a diagnosis of bronchial asthma.

Furthermore, they had less control over their asthma, which was more severe compared to that of patients with other allergies (Table 4). Patients with both asthma and allergies to mold had significantly more exacerbated asthma requiring systemic corticosteroids and/or hospitalization. The results are shown in Figure 1.

Table 4. Characteristics of bronchial asthma in patients with different types of allergies 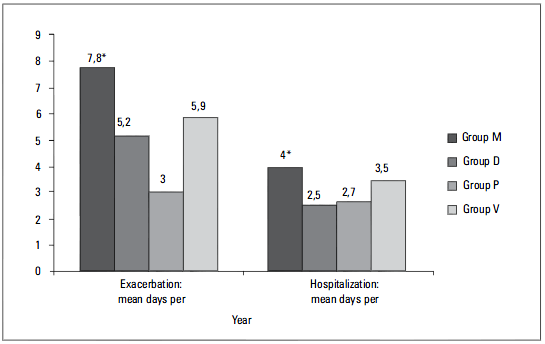 Figure 1. The number of asthma exacerbations per year and hospitalizations caused by asthma in the study groups

The obtained results indicate the important problem of bronchial asthma in patients with allergies to mold. Of the analyzed allergic patients, those with monovalent allergies to mold had significantly more frequent diagnoses of asthma. In this group, patients with allergies to Alternaria were predominant. This finding is consistent with previous observations. Alternaria is a major environmental allergen associated with asthma and allergic rhinitis [12, 13]. Alternaria spp. are generally considered to be outdoor fungi, although they also exist in indoor environments [5, 14]. Airborne outdoor Alternaria spores are detectable from May to November, with the highest levels occurring in cultivated areas containing grasslands and grain [14]. The clinical significance of A. alternata as a respiratory allergen has been well documented. Studies have revealed a strong association between sensitization to Alternaria spp. and the presence of asthma or allergic rhinitis, as well as the severity of asthma [5, 15, 16]. In addition, sensitization and exposure to Alternaria has been associated with epidemics of severe asthma exacerbation, including respiratory arrest [17]. Thunderstorms appear to be a contributing factor to high levels of fungal spores and epidemics of asthma exacerbation [5].

We found that sensitivities to two molds, Aspergillus fumigatus and Trichophyton mentagrophytes, were more common in patients with severe asthma than in others. Aspergillus, Penicillium, Alternaria and Cladosporium, play important roles in the induction of asthma as well as in its intensity patterns [6, 7]. Aspergillus fumigatus can cause allergic bronchopulmonary aspergillosis, which is characterized by its exacerbation of asthma, recurrent transient infiltrates on radiographic images, coughing up of thick mucus plugs, peripheral and pulmonary eosinophilia, and increased total serum IgE and specific IgE levels, especially during exacerbation [18]. In this study, five patients with bronchial asthma, allergy to molds and episode of bronchopulmonary aspergillosis were observed. The importance of Trichophyton mentagrophytes had not been previously confirmed. Fungi in the genus Trichophyton are known to be the causal pathogens of dermatophytosis, a fungal infection of the skin, hair and nails. Trichophyton rubrum and Trichophyton mentagrophytes are the most common pathogens in the genus [5]. However, the route of exposure to Trichophyton allergens in such Trichophyton-infected patients has not been identified. A few reports have suggested the possible role of inhaled Trichophyton in the pathogenesis of asthma or rhinoconjunctivitis among subjects without Trichophyton infections [19, 20]. Occupational exposure to airborne Trichophyton in nail dust has been shown to induce nasal and eye symptoms in chiropodists [21]. There was no such data in our study. Sensitization to Trichophyton is also reported to be a risk factor for more severe disease among the general asthmatic population [22, 23]. However, there is no published information regarding whether a potential correlation exists between Trichophyton and asthma severity.

An important limitation of this study is our testing of IgE-dependent responses only. There is evidence that these species of molds also induce type II, III and IV reactions [6]. Thus, the obtained results about the roles of different types of molds on asthma are not final.

Worse asthma control, a greater number of exacerbations and the need for larger doses of inhaled steroids are the results of the higher prevalence of severe asthma that was observed in this study. The important role of fungi in the exacerbation of asthma has been confirmed in previous literature. TNF-alpha as well as IFN-alpha are secreted by fungi-prestimulated leukocytes from the lower respiratory tract and may be involved in the processes of exacerbation of asthma complicated by fungal infections [24]. However, further details on this role have not been provided [2, 6, 12, 16].