Introduction. Medicinal product Noclaud®, containing cilostazol, was approved in Poland on 19.03.2014 without performing a study on its effectiveness in polish population.

The aim of this study was to evaluate the efficacy of Noclaud® in the therapy of intermittent claudication (the second stage according to Fontaine classification) in patients with peripheral artery disease (PAD), in whom lifestyle modifications and supervised exercise programs did not alleviate the symptoms.

Material and methods. Non-interventional, multi-center, open, post-registration observational study on Noclaud® effectiveness was conducted on 1680 patients with PAD (second stage according to the Fontaine). The assessment of Noclaud® effectiveness included changes in the initial and total claudication distances and changes in ankle-brachial index (ABI). Adverse effects were recorded.

Conclusions. Medicinal product Noclaud® increases claudication distance in patients with second grade peripheral artery disease, according to the Fontaine classification. The administration of this drug has only minor effects on the ankle-brachial index.

Noclaud® (active substance – cilostazol) is a selective phosphodiesterase inhibitor type 3 (PDE3) that increases the production of cyclic adenosine monophosphate (cAMP). The increase in cAMP concentration results in enhanced synthesis of the active protein kinase A (PKA), which is directly associated with inhibition of platelet aggregation. PKA also prevents activation of the myosin light chain kinase, which plays an important role in smooth muscle contraction and thus exerts a vasodilating effect [1].

The effects of cilostazol on blood vessel dilation reported in animal studies were also established in humans. Furthermore, in vitro studies revealed that cilostazol inhibits proliferation of smooth muscle vascular cells in rats and humans, as well as inhibiting excretion of platelet derived growth factor (PDGF) and platelet factor 4 (PF-4) from thrombocytes. Inhibition of platelet aggregation by cilostazol is reversible and effective with respect to a number of pro-aggregation factors such as shear stress, arachidonic acid, collagen, adenosine diphosphate (ADP), and adrenaline [1, 2]. In human studies, it was observed that the anti-aggregation effect of cilostazol is maintained for 12 hours. After discontinuation, platelet aggregation returns to normal within 48–96 hours without excessive rebound aggregation [3, 4]. It has also been found that after 12 weeks the use of cilostazol at the dose of 100 mg twice a day reduced serum triglyceride levels by 15% and increased HDL serum levels by 10% [5].

Results of a meta-analysis of 10 randomized studies, which included 2247 patients, showed that the use of cilostazol improved exercise capacity, as measured by the change in total claudication distance and the initial claudication distance (to the onset of pain), in comparison to placebo [6]. In addition, results of a meta-analysis conducted on 9 studies revealed that administration of cilostazol at the dose of 100 mg twice a day significantly increased the maximum walking distance by 42 meters during 24 weeks of treatment compared to placebo. The observed improvement was less pronounced in diabetic patients [7]. The results of a randomized, double-blinded, placebo-controlled, phase IV study conducted on 1435 patients with intermittent claudication without heart failure showed that during the 18-month (median) follow-up period, mortality rate during the administration of cilostazol accounted to 5.6% (95% CI: 2.8–8.4%), whereas in placebo reached 6.8% (95% CI 1.9–11.5%) [8].

The aim of this study was to evaluate the efficacy of Noclaud® in the therapy of intermittent claudication (the second stage according to Fontaine classification) in patients with peripheral artery disease (PAD), in whom lifestyle modifications and supervised exercise programs did not alleviate the symptoms.

This was an open, non-interventional multi-center post-registration study collecting data on the effectiveness and adverse effects of the medicinal product Noclaud®, administered for 6 months according to the recommendations specified in the Summary of Product Characteristics in adults (above 18 years old) with intermittent claudication without pain at rest or peripheral necrosis (grade 2 according to the Fontaine classification), in whom advised changes in lifestyle (including quitting smoking and supervised exercise program) and other appropriate interventions did not sufficiently reduce the symptoms of intermittent claudication. The inclusion criterion included administration of Noclaud® for at least 14 days, but no longer than 3 months. The exclusion criteria were as given in the Summary of Product Characteristics [4]. Participation in the study did not result in any further diagnostic procedures or additional surveillance. According to the Polish law, a non-interventional post-registration study is not classified as a medical experiment therefore does not require consent of a bioethics committee and informed, written consent for participation in the study.

One-hundred-ten vascular surgeons, angiologists and primary care physicians participated in the study, performing 7–9 months follow-up in 1680 patients receiving Noclaud® as routine treatment. Specified period for evaluation of the effectiveness of this drug, including the period of treatment before the first visit.

The follow-up sheet consisted of three sections that were to be completed during three separate follow-up visits.

During visits 2 and 3, which took place at approximately 3-monthly intervals, data regarding the effectiveness of the treatment administered (initial and total walking distance, ABI) were collected along with data regarding changes in pharmacotherapy for concomitant diseases, and reported adverse effects related to administration of Noclaud®.

The effectiveness of Noclaud® administration was assessed based on an increases in initial (without pain) and total claudication distance on the treadmill, and in the maximal walking distance in 6-minut walking test and increase in ankle-brachial index (ABI) in comparison with the index estimated before treatment.

ABI below 0.9 was classified as indicating ischemia and below 0.4 as critical ischemia.

Statistical analysis was performed using STATISTICA 10.0 PL software. The qualitative data was presented as percentages, whereas quantitative data was presented as means with standard deviations and confidence intervals. Distribution of qualitative variables was compared using the χ2 test and χ2 for the trend. Whereas, the ANOVA test was used to compare variances in quantitative variables, p < 0.05 was considered statistically significant.

Characteristics of the study group

Before the administration of Noclaud®, a treadmill test was performed in 25.1% of the patients, and a six-minute walk test in 41.2% of patients. In addition ABI was measured in 54.5% of patients and critical ischemia was detected in 1.2% of the tested population (Table 2).

Table 2. Changes in blood pressure, heart rate, claudication distance and ankle-brachial index and administration of statins, fibrates and antiplatelet drugs during the use of Noclaud®

*Before initiation therapy with Noclaud®

Lifestyle modifications were implemented before the administration of Noclaud® in 90.8% of patients. These included smoking cessation (44.1%) and increasing physical activity by walking (53.6%). Only 6.5% of patients participated in the supervised exercise programs.

Prior Noclaud® administration 56.3% of patients were receiving pharmacotherapy for PAD, mostly included pentoxifylline (82.9%), acetylsalicylic acid (7.8%) and naftidrofuryl (4.9%) – see Table 1. Statins were prescribed in 91.1% of subjects, often due to concomitant diseased.

Treatment for hypertension, lipid disorders and diabetes was carried out in 71.0%, 67.8% and 24.5% of patients respectively.

Treatment with the Noclaud® preparation

Noclaud® was prescribed at the recommended dose of 2 × 100 mg in 98.6% of patients. At the first visit the drug was used for 25 ± 11 days at mean. During follow-up visits, doses were not modified.

Effectiveness of the treatment with Noclaud® preparation

Table 3. Increase in the claudication distance during the study. Data shown as mean values and 95% CI 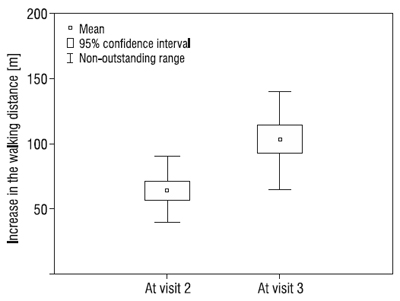 Figure 2. Increases in distances in 6-minute walk test during therapy with Noclaud® after 3 (visit 2) and 6 (visit 3) months 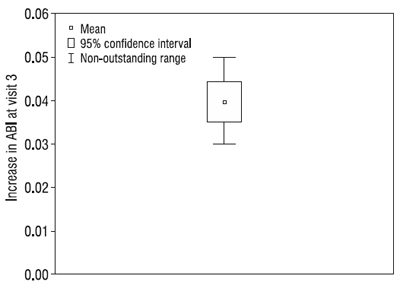 Figure 3. The increase in ankle-brachial index (ABI) during therapy with Noclaud® after and 6 months (visit 3)

There were 126 patients (7.5%) who did not complete the observation. One patient died (no data concerning the cause is available). Eighty patients discontinued treatment, but only in four it was due to adverse drug reactions (0.24% of the study cohort). The most common reason of discontinuation was lack of money to buy the drug (25 patients, 1.5% of the population). One patient discontinued the treatment after revascularization. In addition, 45 patients were lost to follow-up.

Adverse effects related to administration of Noclaud® were reported in 5 patients and included: arrhythmias (n = 4), headaches and dizziness (n = 1), and malaise (n = 1) – the severity of symptoms were not specified.

The results of this study, as well as previous clinical studies performed in patients with symptomatic chronic lower limb ischemia, show that treatment with cilostazol is effective and results in increased claudication distance. Results of a meta-analysis of seven randomized clinical trials (2008) with placebo groups showed that administration of cilostazol at a dose of 100 mg twice a day increased claudication distance by 31 (95% CI: 21–41) and by 41 (27–90) m respectively, at a dose of 50 mg twice a day for 12 to 24 weeks [9]. In this study, not controlled against placebo, the observed increase in the initial claudication distance related to the administration of Noclaud® was by 88 (95% CI: 76–100) m after 3 months, and 125 (106–145) m after 6 months on treadmill testing, and the total claudication distance by 121 (95% CI: 99–142) after 3 months and 148 (119–177) m after 6 months during a six-minute walk test. The observed differences between this study and the average results of seven randomized clinical trials may result from differences in the study cohorts analyzed in terms of symptom severity, concomitant heart diseases (e.g. ischemic heart disease), lung diseases (e.g. COPD), and musculoskeletal disorders.

It should be emphasized that treatment with Noclaud® was generally safe and well tolerated by patients. Adverse drug reactions were reported by only 5 patients (0.3% of the treated population). These included arrhythmias, pain, vertigo, and malaise. No diarrhea or other disturbances in defecation, which were reported in previous studies on the original product [4], were reported in this study.

The limitation of this multicenter study is the lack of standardization of measurement protocol of the initial and total claudication distances.

1. Noclaud® increases the claudication distance in patients with peripheral artery disease grade 2 according to Fontaine classification.

2. The administration of this drug has only minor effects on the ankle-brachial index.

The study was conducted by Europharma M. Rachtan Ltd. as part of a scientific grant from EGIS Polska Ltd.