Occlusion of the intracranial arteries is the cause of up to 80% of ischaemic strokes. Of these, 1% are caused by occlusion of the basilar artery. There are currently two methods for treating the acute phase of ischemic stroke: intravenous thrombolysis and mechanical recanalization of the blood vessel. We present the case of a 59-year-old man with basilar artery occlusion treated endovascularly. Treatment was begun in the second hour after onset of symptoms. First intravenous thrombolysis was performed, followed by mechanical thrombectomy. Complete reperfusion of the blood vessel was achieved and the patient’s neurological condition improved significantly.

The patient was discharged after 10 days of treatment with a diagnosis of paroxysmal atrial fibrillation. Oral anticoagulants were used in secondary prevention.

Occlusion of the basilar artery is a rare cause of ischaemic stroke with a poor prognosis and high mortality rate. About 80–90% of patients die because no successful treatment is available [1]. The incidence rate for first stroke in the United States and Europe ranges from 110 to 190/100,000 in the general population, while in Poland it is estimated at 171/100,000 for men and 93/100,000 for women, or about 60,000 new cases every year [2]. One in every six people will have a stroke at some time in their life. About 8% of patients will have another stroke within a year of the first one [3]. Early recanalization of an occluded blood vessel is the only effective method improving the prognosis. Advances in intracranial techniques and the increase in the number of interventional radiology facilities offer great hope for improving the availability and effectiveness of treatment of embolic ischaemic stroke. A combination of thrombolytic treatment and mechanical thrombectomy yields the highest percentage of successful interventions [4]. A fundamental condition for successful treatment is time. According to the latest guidelines, the therapeutic window is 6 hours in the case of both anterior and posterior circulation [5].

The aim of the paper is to present the case of a patient with acute embolism of the basilar artery, in which a cerebral thrombectomy was performed following prior intravenous thrombolysis.

The patient, aged 59, was brought to the Emergency Department of the John Paul II Autonomous Public Voivodeship Hospital in Zamość at 8:30 a.m. after suddenly losing consciousness at his home at about 7:45 a.m. The patient had smoked cigarettes in the past, but had stopped 10 years ago. Eight years earlier he had suffered an ischaemic stroke of the left cerebral hemisphere in the region of the branches of the middle cerebral artery, after which he had regained nearly complete functionality, with a slight speech impairment in the form of motor dysphasia. The cause of the stroke was not determined at that time. The patient was taking 75 mg of acetylsalicylic acid per day as secondary prevention following an ischaemic stroke 8 years earlier in the region of the right middle cerebral artery. He was not being treated for any other conditions, had noticed no worrisome symptoms, and was actively employed. On admission to the Emergency Department his condition was assessed as severe. He had severe quantitative impairment of consciousness (5 points on the GCS scale), extensor spasticity of the upper and lower limbs, and impaired breathing requiring intubation. Neurological examination showed narrow, symmetrical pupils, flaccid tetraparesis and bilateral Babinski sign. The patient scored 38 points on the NIHSS scale. On the basis of the patient’s clinical condition and a CT scan of the head (Fig. 1), acute brainstem stroke resulting from occlusion of the basilar artery (BA) was suspected, and was confirmed by urgent CT of the head showing the hyperdense BA (a hypodense lesion in the left temporal and parietal lobes was noted as well; Fig. 1). When it had been determined that the patient met the inclusion criteria, rtPA was begun immediately (within the second hour after onset of symptoms). The drug was administered at a dose of 0.9 mg/kg, 10% in a bolus and the remaining 90% by intravenous infusion within 60 min. At the same time a thrombectomy team was informed of the possibility of interventional treatment. After 30 minutes of treatment with rtPA there was no improvement in the patient’s NIHSS score. To avoid a delay in treatment, without interruption of the IV treatment the patient was transported to a hybrid operating room. Angiography confirmed occlusion at the top of the basilar artery (Fig. 2). Treatment by mechanical thrombectomy was begun in the third hour after onset of symptoms. 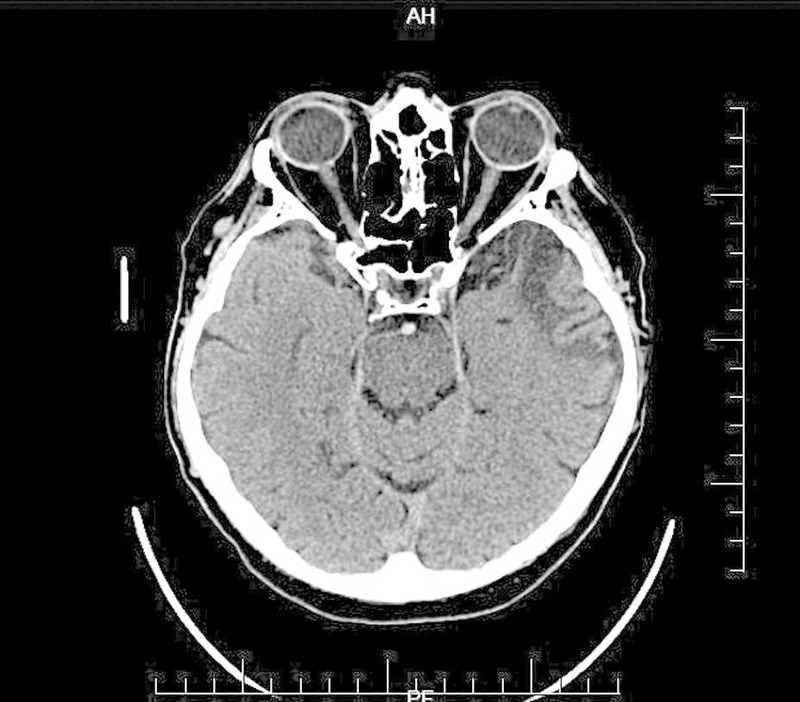 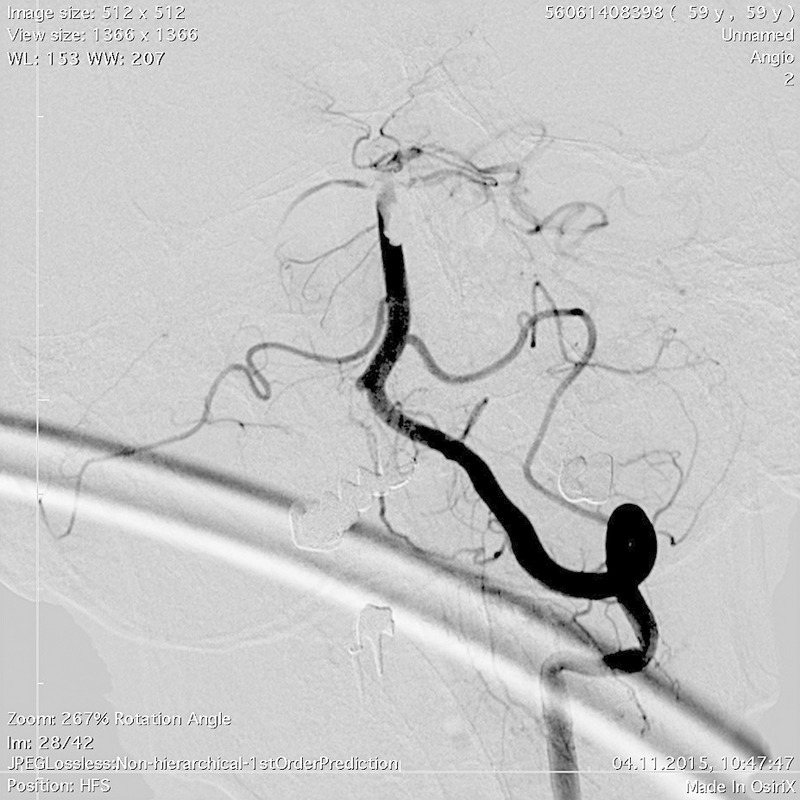 Figure 2. Angiography of the posterior circulation of the brain with a visible thrombus in the distal part of the basilar artery

The patient was given general anaesthesia with an anaesthesiologist in attendance. In the initial period after administration of anaesthesia the patient’s systolic blood pressure decreased from 160 mm Hg to 120 mm Hg.

A sheath was placed in the common right femoral artery by the Seldinger technique. A hydrophilic guidewire and then a VERT diagnostic catheter, 4 French (4F) in diameter, were introduced into the left vertebral artery. When the catheter reached the V3 level, it was replaced with an Envoy XB guiding catheter (Codman©) 6F. Angiography showed an extensive thrombus at the top of the basilar artery with residual flow to the left posterior cerebral artery and occlusion of the right posterior cerebral artery – a score of 1 on the TICI (Thrombolysis in Cerebral Infarction) scale (Fig. 2). Then a Prowler Select Plus (Codman©) microcatheter with a NeuroScout Guidewire (Codman©) was introduced outside the area of the thrombus into the left posterior artery. A ReViveTM SE stent retriever was introduced through the microcatheter and released in the initial segment of the left posterior cerebral artery and the top of the basilar artery. After 2 minutes the stent retriever was removed and the control angiography showed complete reperfusion of the basilar artery and the posterior cerebral arteries – TICI 3 (Fig. 3). The presence of organized thrombi was observed in the stent retriever and in the suctioned material from the guiding catheter (Fig. 4). Following removal of the catheters, the femoral artery was closed with the FemoSealTM vascular closure system. 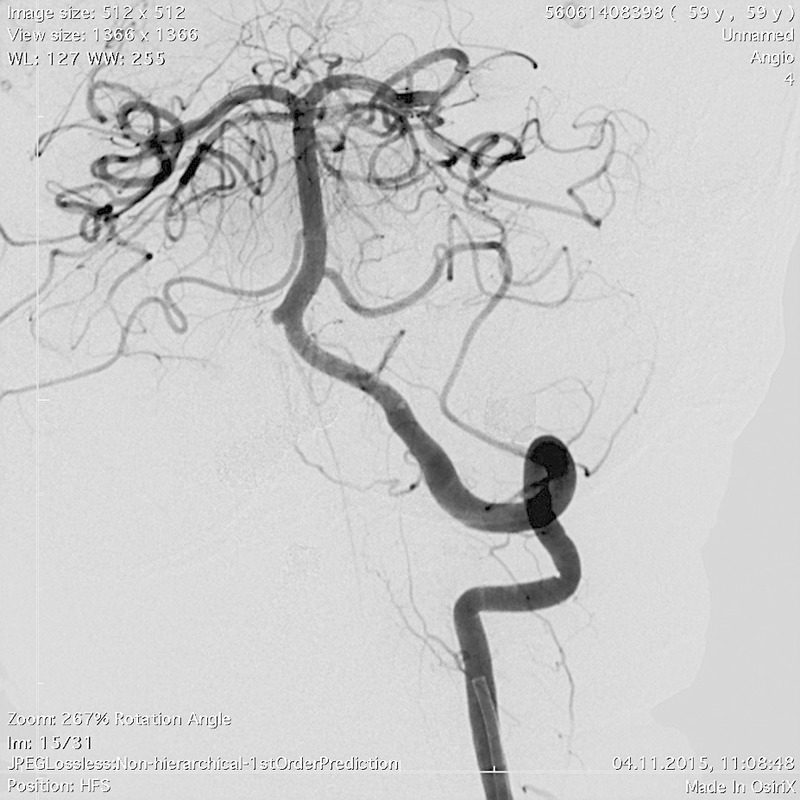 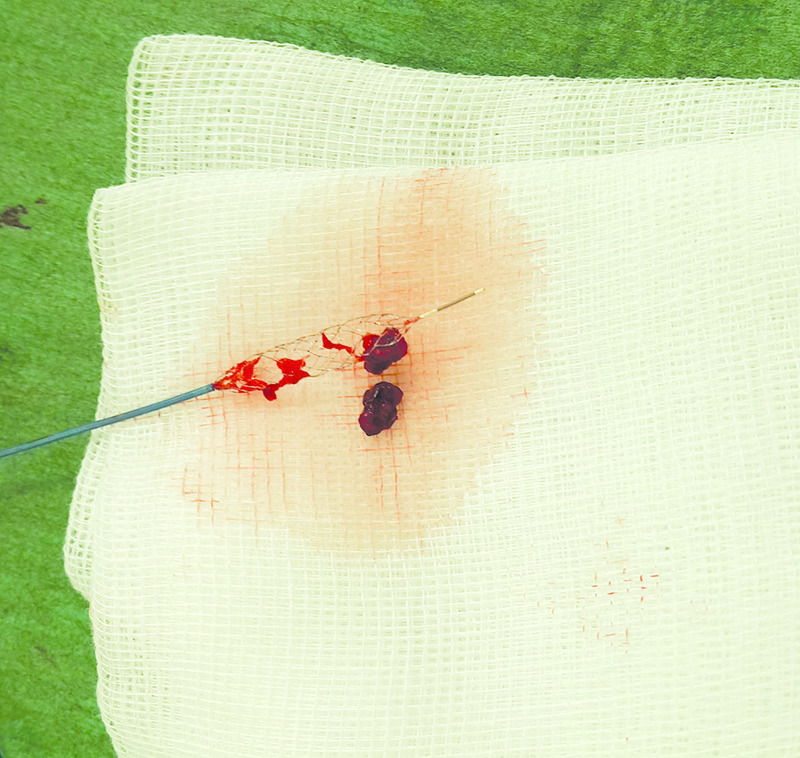 After the procedure the patient was returned to the Neurological Intensive Care Unit on a respirator. His circulation and respiration were stable. After 30 min he slowly began to regain consciousness; after 60 min he was able to breathe on his own and to understand and follow instructions; after 90 min he was extubated. A neurological examination after 120 min showed speech impairment in the form of moderate dysphasia, normal auto- and allopsychic orientation, pupils equal and reactive, normal eye movements, no paresis of the limbs, left lower limb ataxia and bilateral positive Babinski sign – 2 points on the NIHSS scale. Control CT scan of the head 24 hours after treatment showed no signs of acute ischaemic stroke. To diagnose the causes of the BA embolism 48-hour Holter monitoring and echocardiography were performed. The Holter monitor showed long episodes of atrial fibrillation and atrial flutter with a maximum frequency of 180/min, with a tendency towards bradycardia with a frequency of 40/min at night. Echocardiography showed enlarged right (33 × 54 mm) and left (40 × 50 mm) atria, ventricles of normal size, normal systolic function (EF 64%), and insignificant atrioventricular valve incompetence.

Doppler ultrasound of the carotid and vertebral arteries and transcranial Doppler ultrasound showed occlusion of the V3–4 segment of the left vertebral artery. Flow parameters of the other vessels examined were normal, with no atherosclerotic plaques in the carotid and vertebral arteries. Due to the confirmed diagnosis of paroxysmal atrial fibrillation, a beta-blocker and Rivaroxaban were included in the treatment. The patient was discharged from the stroke ward on the 10th day with an ability score of 2 on the mRS scale and a diagnosis of embolism of the basilar artery due to a cardioembolic mechanism.

The first mechanical revascularization device was the MERCI system (Concentric Medical, USA). In a study by Multi-MERCI published in 2008 the procedure had a 57% success rate [7]. The Penumbra System (Penumbra, USA), also developed during this period, was based on a suction mechanism removing embolism material previously broken up with a special separator. The effectiveness of the system was 81% [8]. In 2007 the concept of stent retrievers first appeared – self-expanding stents for mechanical removal of a clot from a cerebral vessel [9, 10]. The first and currently most commonly used device of this type is the Solitaire FR (Covidien, Ireland). The first randomized trials, IMS III, SYNTHESIS Expansion and MR RESCUE, failed to confirm the superiority of these devices over intravenous thrombolysis, but the percentage of use of stent retrievers in all of the transarterial therapy in these trials was marginal [11–13]. The breakthrough came in 2015. The MR CLEAN trial, whose results were published in January 2015, followed by REVASCAT, ESCAPE, SWIFT PRIME, EXTEND IA, THERAPY and THRACE, showed that endovascular treatment had a clear advantage over thrombolysis, with comparable safety [14–18]. A limitation of these trials, however, was the selection of patients, as only patients with blockage of the internal carotid and middle cerebral arteries were included in the trials.

The case described above is one of the first cerebral thrombectomies performed in our hospital. In our opinion the highly satisfactory radiological and clinical outcome was due mainly to the short time elapsed between the stroke and the removal of the embolism, as well as to the previously performed intravenous thrombolysis. The artery was cleared 200 min after the onset of symptoms. In the MR CLEAN and REVASCAT trials, the time required was 332 and 355 min, respectively. Post hoc analysis of IMS III has shown that each 30-minute delay in reperfusion reduces the chance of a successful outcome by 12% [19].

The type of anaesthesia to be used during thrombectomy has recently been widely discussed. General anaesthesia allows greater comfort during the procedure, which is particularly important in case of anxious patients with psychomotor agitation, but carries the risk of an excessive drop in blood pressure before the vessel is cleared, as most anaesthetics reduce blood pressure.

Local anaesthesia, on the other hand, allows for better monitoring of the patient’s condition and also makes it possible to avoid intubation and associated complications.

In acute ischaemic stroke it is important to attempt to restore the blood flow in the affected area as quickly as possible in order to maximally limit the extent of the ischaemia. Intravenous treatment and mechanical thrombectomy are currently available.

When thrombolysis is not effective, mechanical thrombectomy of basilar artery occlusion may in certain cases lead to significant clinical improvement and should be attempted despite the lack of sufficient evidence in randomized trials.