Crohn’s disease and ulcerative colitis are classified as inflammatory bowel diseases (IBD) [1]. Crohn’s disease is characterized by the involvement of the intestinal wall, which leads to the formation of ulcers, fistulas and strictures of the intestine. The disease is more frequently found among Caucasians. Parenteral manifestations are possible in the course of IBD, including osteoarticular and ocular manifestations, affecting the skin or the blood vessels. Only a few cases of the coexistence of Takayasu’s disease and IBD have been reported so far [2–5]. Takayasu’s disease is a chronic inflammation of the large-diameter vessels, which was described for the first time nearly two hundred years ago [6]. The incidence of Takayasu’s disease in the U.S. is estimated at about 2.6 cases per million. This condition, in contrast to IBD, is most common among young women of the Asian origin [7]. 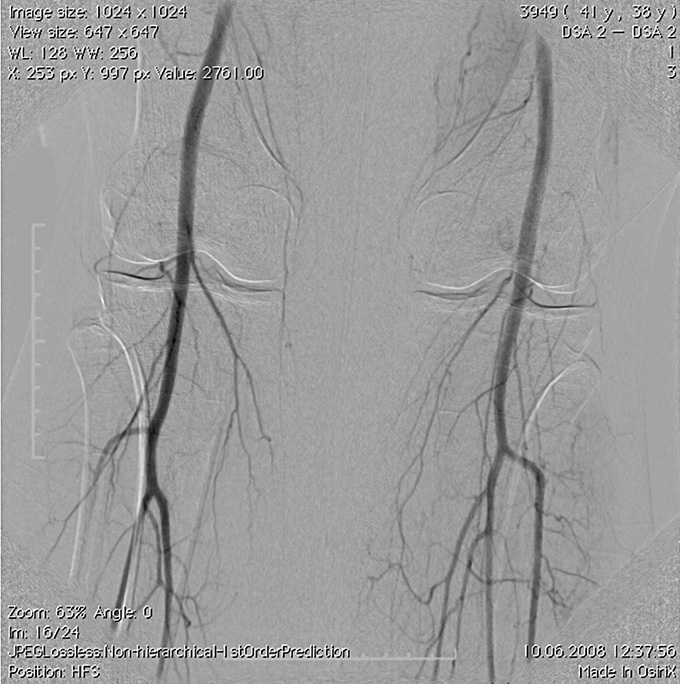 Figure 1. A normal picture of the final part of the aorta, and iliac and lower limb arteries up to the initial parts of the popliteal arteries 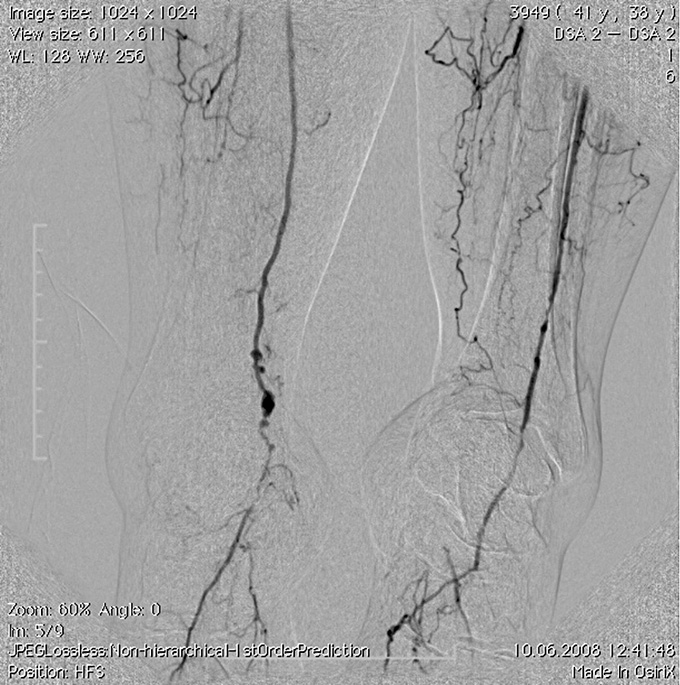 In the years 2005–2007, the patient was diagnosed because of abdominal pain and diarrhoea. Endoscopic examination revealed features of severe gastritis, and there was a negative result in the urease test. In 2007, based on the histopathological examination of specimens from the colon and the distal ileum, Crohn’s disease was diagnosed. Additional laboratory tests revealed anaemia, leucopoenia, elevated total protein concentration, hypergammaglobulinaemia, and erythrocyte sedimentation rate (ESR) increased to 70 mm after 1 hour. A myelogram showed a raised number of lymphocytes and plasma cells, but it did not meet the criteria for the diagnosis of multiple myeloma. The patient began treatment with sulphasalazine.

In August 2008, the woman presented to the Department of Internal Medicine because of intermittent claudication, with a claudication distance of approximately 100 meters. Blood pressure measurements revealed no differences between the two upper limbs and were within normal limits. Carotid ultrasound examination detected no abnormalities; the mean thickness of the complex of the media and the intima of the carotid arteries was 0.6 mm, taken in three measurements. There were no flow disturbances in the brachial and radial arteries of the upper limbs. The laboratory diagnostic tests showed leucopoenia (WBC 3100/mm3), increased percentage of eosinophils up to 7.4% with a total eosinophil count of 230/μL. There were no pANCA or cANCA antibodies. Further examinations for thrombophilia showed as follows: anti-thrombin activity 85.4%, protein C 100% (70–140%), protein S 65.7% (63–121%), APCR V 2.628 (2.180–3.38), factor Leiden absent, anti-cardiolipin antibodies 16.2 μg/mL (0–10 μg/mL). Patient did not agree for arterial biopsy.

In October 2008, due to aggravation of the ischaemic left foot symptoms, the patient was referred for angioplasty of the lower limb arteries. The angiography revealed obstruction of the distal part of the left anterior tibial artery, the dorsal pedal artery, and the lower one-third of the posterior tibial artery and the fibular artery. The peripheral arterial angioplasty of the narrowed blood vessels of the left lower limb led to restoring patency of the anterior and posterior tibial arteries, the plantar artery, and the dorsal pedal artery to the middle of its length. Ankle-brachial index (ABI) for the left lower limb increased from 0.93 to 1.19. The patient was discharged with the recommendation to take low-molecular weight heparin (dalteparinum natricum), anti-platelet agents (aspirin, ticlopidine), lipid lowering drugs (atorvastatin) and pentasalazine. In the control studies, anti-thrombin III activity was 101.8%, factor VIII activity was 92.3%, anti-cardiolipin IgG anti­bodies were 10.8 μg/mL (0–10 μg/mL), IgM 3.19 μg/mL (0–20 μg/mL), Leiden factor was absent.

In December 2008 and March, April and May 2009, despite pharmacotherapy, the patient was subjected to another peripheral arterial angioplasty because of recurrent episodes of left lower limb ischaemia. The control angiography performed in May 2009 revealed no significant changes in the left superficial femoral artery, a changed contour of the left tibial arteries, and stenosis of the distal part of the left posterior tibial artery.

Due to the lack of sustained improvement after coronary angioplasty, and the aggravation of the ischaemic symptoms of the left lower limb despite pharmacological treatment, it was decided to initiate treatment with corticosteroids. Prednisone was given at an initial dose of 40 mg/day, which led to a significant improvement in the patient’s health condition, expressed by the disappearance of foot pain at rest, and gradual extending of the intermittent claudication distance. Even though the prednisone doses were reduced, the patient developed features of hypercortisolism, and therefore prednisone was changed to deflazacort, taken in a daily dose of 30 mg. From June 2009 to June 2015 there was no relapse of the symptoms; the patient has been reporting moderately severe left foot pain after covering a distance > 1 km. PET examination performed in June 2015 revealed hepatic steatosis and increased metabolic activity in spleen, while any signs of inflammatory process were found. At the moment, angiological assessment reveals no need for intravascular intervention, and satisfactory blood flow parameters in the left lower limb. ABI index for the left and right lower extremity is 0.98 and 1.07, respectively. The patient is receiving maintenance treatment at a dose of 6 mg of deflazacort daily.

Takayasu’sdisease, also called the ‘pulseless disease’, is a chronic disorder affecting the aorta and its main branches, particularly the carotid and the subclavian arteries. Neither our patient’s clinical image nor the angiographic picture represents Takayasu’s disease. Also, during the clinical assessment any skin lesions that could suggest leukocytoclastic vasculitis were observed.

The vascular obstructive changes observed in the angiography were located mainly in the distal segments of the lower limb arteries, with normal angiographic and ultrasound pictures of the arteries in the upper body and the iliac and femoral arteries, which could suggest Buerger’s disease. The patient has never smoked tobacco and does not fulfil other diagnostic criteria of Buerger’s disease. Since the early years of her life the patient has had inflammatory markers, such as elevated ESR, hypergammaglobulinaemia, and features of chronic hepatitis. In the literature however, exist the descriptions of a disease mimicking Buerger’s disease. So called Buerger’s disease-like cases were observed in the course of hypereosinophilic syndrome, manifested by necrotic lesions of the distal parts of the hands or feet [10–14]. Many years of observation revealed in our patient leucopoenia and an increase in the percentage of eosinophils to 7.4% during exacerbation of the disease, which corresponded to the absolute number of 230 eosinophils/μL, and it did not meet the criteria for diagnosing hypereosinophilic syndrome (HES) [15].

Parenteral manifestations are often observed in the course of IBD, including osteoarticular or ocular manifestations, or affecting the skin. Cardiovascular complications, such as deep vein thrombosis, may appear in the course of IBD. The immune system plays a key role in the pathogenesis of IBD. The excessive activation of CD4 T-cells and increased secretion of pro-inflammatory cytokines, such as TNF-α, IL-8, IL-12 and IL-1β may be responsible for the systemic inflammatory response manifested by damage to many organs. In some cases the involvement of the arterial part of the vascular system is probably a predominant symptom of the parenteral IBD manifestations.

So far, the literature has not described cases of Crohn’s disease coexisting with angiographic features suggesting the presence of Buerger’s disease. The unusually turbulent course of the disease, with recurrent multilevel arterial narrowing despite invasive treatment, and spectacular improvement after steroid therapy, is clear evidence for the inflammatory aetiology of the disease. According to Revised International Chapel Hill Nomenclature of Vasculitides, our case can be classified as vasculitis associated with systemic disease [16].

The patient that we describe claims that at the time of lower limb ischaemia the severity of gastrointestinal symptoms is reduced. The stage of vascular disease suggests the chronic character of the inflammation of the vessels, which has possibly lasted for many years. It should be assumed that during this period two active processes co-existed – inflammation of the intestines vasculitis. However, the diseases did not manifest clinically at the same time. It seems that in some patients immunological processes at certain times may lead to exacerbation of colitis, while in others vasculitis can dominate, for unexplained reasons. Of course, this involves only a small percentage of patients with IBD. No conclusive evidence for the common aetiopathogenesis of IBD and vasculitis, along with their relatively rare coexistence, do not permit, despite relatively simple methods, such as carotid artery ultrasound or evaluating the ankle-brachial index, the recommendation of them as screening tests of the vascular system in patients with IBD.

Recently, Alkan et al. demonstrated increased risk of subclinical atherosclerosis in patients with IBD [17]. Mean age of studied patients was 38.4 ± 6.5 years and was similar to the age of our patient. It should be emphasized, however, that in cohort examined by Alkan et al. only early signs of atherosclerosis, expressed as intima-media thickness, were present in patients with IBD, while in our patient the degree of vascular involvement was extremely high. Thus, it suggest rather inflammatory than atherosclerotic process, or, what cannot be excluded, primary inflammatory process promoting the development of atherosclerotic changes.

There is no doubt about the importance of the possible coexistence of IBD and vasculitis. The basic clinical evaluation of patients with IBD in terms of vascular pathology, including detailed medical history and checking the pulse on the upper and lower extremities, may allow the selection of patients with IBD who develop pathological processes that can be described as vas-colitis.