We present a case of man with portal vein thrombosis associated with complex inherited thrombophilia. The paper emphasises diagnostic and therapeutic difficulties in patients with visceral vein thrombosis.

A 42-year-old male, previously healthy, active sportsman, with no significant medical history, denying smoking, alcohol consumption and use of other stimulants. First signs of the disease appeared in form of diffuse abdominal pain and nausea. Several days before the patient had done some repair works at home and sustained a minor abdominal injury. Initially mild symptoms had become exacerbated on subsequent days. For that reason the patient reported to the Emergency Room of a local hospital. During a hospitalisation in the Internal Medicine Ward, a slight yellowing of body integument and tenderness to palpation of the abdomen were found, with no pathological resistance or peritoneal signs. Laboratory investigations revealed an increased neutrophil count (78%) in the blood smear, with normal count of leukocytes (10.5 K/µl), increased aminotransferase (ALT 132 U/L, AST 118 U/L), bilirubin (4.6 mg/dL), CRP (120 mg/L) and ESR (52 mm/h) levels; and increased urobilinogen level and the presence of ketone bodies in general urinalysis. Blood and urine amylase levels were normal. HBV, HCV, and CMV infection were ruled out. Stool investigation for presence of parasite eggs and the Giardia intestinalis antigen were negative. Imaging diagnostics was applied: X-ray of the chest, ultrasound examination of the abdomen, gastroscopy and colonoscopy. Besides some enlargement of the spleen (15 cm in the bipolar dimension) and some fine cysts in the right kidney, the investigations revealed no pathologies. Empirical therapy was applied – analgesics, relaxants, proton pump inhibitors, antibiotics (metronidazole, amoxicillin/clavulanic acid), anxiolytics – with no improvement. At that time, a CT of the abdomen and pelvis with a contrast medium was performed, that failed to provide any additional information. Description of the investigation stated: “large vessels of the abdomen appear normal“. With no significant improvement the patient was discharged to home, with a recommendation to report to a higher reference level centre in case of intensification of complaints. Two days later, because of deterioration of the patient’s general condition, he was admitted to the Teaching Department of Gastroenterology, with signs and symptoms of acute abdomen. Laboratory investigations performed there revealed a significant leukocytosis (34 K/µl), thrombocytaemia (994 K/µl), increased D-dimers and fibrinogen level (6.5 g/L). Emergency CT of the abdomen indicated presence of a significant volume of free fluid in the peritoneal cavity, thickening of small intestinal wall (up to 9 mm) with blurring of its internal outline and increased density of mesenteric fatty tissue (signs of venous stasis) and thrombosis of the portal vein, its branches and the superior mesenteric vein (Fig. 1–3). The splenic vein was patent, with maintained outflow via the patent inferior mesenteric vein. Considering the patient’s poor general condition and increasing signs of enteral obstruction, the patient was qualified for laparotomy. The procedure revealed small intestinal wall necrosis over the distance of 70 cm starting 20 cm behind the ligament of Treitz. The remaining part of the small intestine also presented signs of ischaemia, but with no evident signs of necrosis. The necrotic section of the intestine was excised, with externalisation of a single-barrel ileostomy at the proximal end. The distal section was closed completely. The abdominal cavity was left open for further stages of the surgical treatment. Resection of additional 100 cm of the intestine was necessary because of necrosis, and the total resected length of the small intestine was 170 cm. Pharmacotherapy involved low-molecular-weight heparin at therapeutic doses, adjusted for body weight. The surgical treatment was complicated by septic infection of the abdominal cavity and acute respiratory failure, with necessary transfer of the patient to the intensive care unit. Weakness, progressive body weight loss, dehydration, electrolyte balance disorders, hypoalbuminaemia, increased creatinine and urea levels, anaemia in course of short bowel syndrome were observed following the patient’s discharge. Parenteral nutrition had to be implemented. Persistent bilirubin, aminotransferase, GGTP, alkaline phosphatase, lipase and amylase levels observed in laboratory investigations were associated with hepatic injury being a result of past thrombosis of the portal system. Investigations for thrombophilia were carried out in order to determine a reason for visceral thrombosis. Diagnostic procedures revealed a complex haemostasis defect in form of the S protein deficiency, presence of the Leiden factor (heterozygote), polymorphism of the MTHFR gene and increased activity of the factor VIII (Tab. 1). Considering high risk thrombophilia, a long-term antithrombotic treatment was recommended. Coexistence of signs of the short bowel syndrome and hepatic injury limited possible application of oral antithrombotic agents. Therefore, LMW heparin was maintained, at a dose adjusted for body weight. 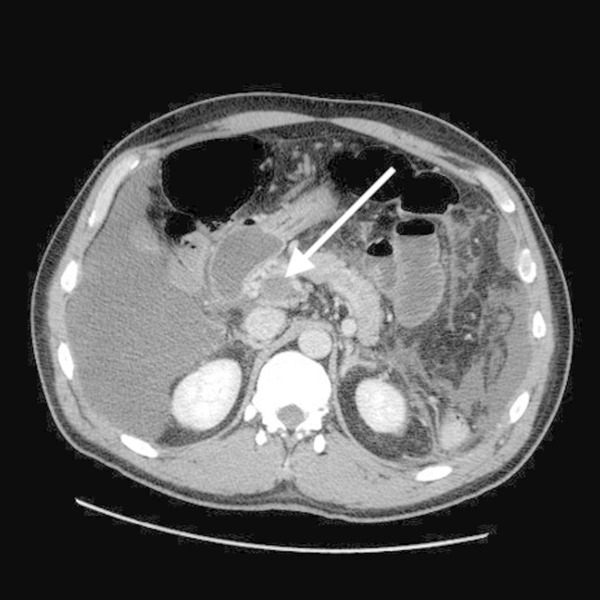 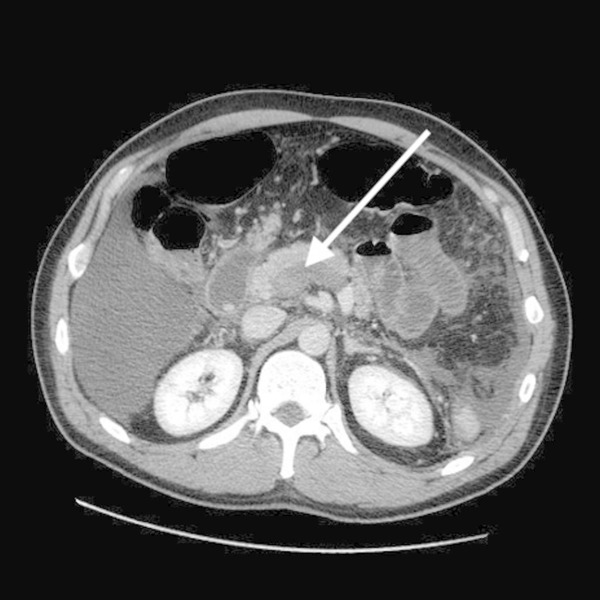 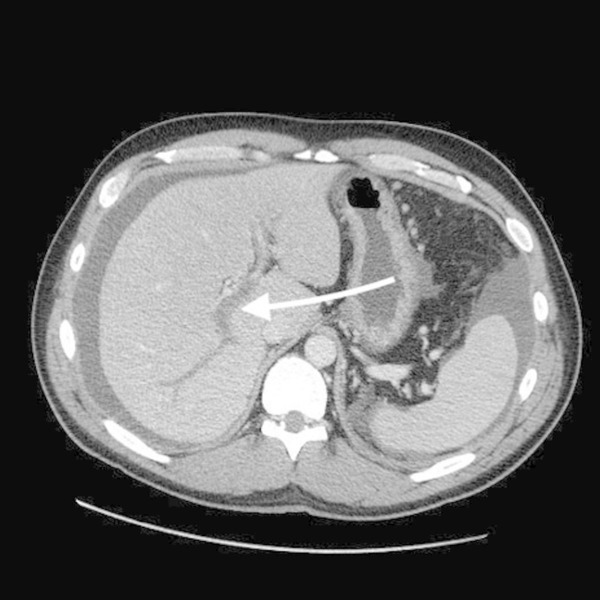 Visceral vein thrombosis is responsible for 10–15% of cases of acute enteral ischaemia [1, 2]. Despite an unquestionable progress in diagnostics and therapy of visceral vein thrombosis observed recently, prognosis in that disease remains very serious, with a mortality rate reaching 30%. It is associated with deceitful onset of the disease, and development of symptoms within several days, which leads to delayed diagnosis reached when necrosis of the whole thickness of the intestinal wall had already developed. The delayed diagnosis is one of the principal reasons for poor prognosis. Direct complications of bowel necrosis (infection) and distant complications in form of the short bowel syndrome, present an additional burden to the unfavourable prognosis. A non-specific clinical presentation and lack of specific changes in laboratory investigations are a reason for the fact that a clear diagnosis is based only on results of imaging diagnostic procedures (CT, MRI).

The following are mentioned as aetiology factors of visceral vein thrombosis: inflammation processes (purulent) of the abdomen, hepatic disorders (cirrhosis), acute pancreatitis, tumours, injuries, surgical procedures and hypercoagulability (myeloproliferative diseases, thrombophilia). In many cases (up to 50%) the aetiology factor could not be established [1–3].

An antithrombotic therapy consistent with general principles is of crucial significance for treatment of visceral vein thrombosis [4, 5]. Surgical treatment is justified in case of presence of peritoneal signs, or in case of suspected bowel wall necrosis, before signs of peritoneal irritation develop. No major randomised clinical trial regarding treatment of visceral vein thrombosis have been conducted so far. Current recommendations are experts’ opinions and are based on observation of small groups of patients. Initiation of heparin treatment is recommended in case of acute visceral vein thrombosis, and a continued medication with a vitamin K antagonist, lasting for not less than 3 months [2]. In justified cases, in presence of a constant prothrombotic factor (e.g. thrombophilia), the antithrombotic treatment should be long-term. In some cases also thrombolytic treatment is attempted, with administration of a fibrinolytic agent via the superior mesenteric artery, or by a direct cannulation of the portal vein. Unfortunately, the thrombolytic treatment is associated with a high incidence of haemorrhagic complications [6].

In the presented case the course of visceral vein thrombosis was (unfortunately) rather typical. Based on the medical history, the time from onset of first symptoms to the final diagnosis and introduction of an appropriate treatment was 4 weeks, including 2 weeks from the first patient’s contact with a medical centre. Late diagnosis has led to enteral wall necrosis with development of septic complications, which significantly extended the time of hospitalisation and the convalescence period, and has also lead to necessary extensive resection of the small intestine and development of the short bowel syndrome. It may be speculated that an earlier diagnosis would allow avoiding severe complications of visceral vein thrombosis. The causal factor of the patient’s venous thrombosis was a complex defect of the clotting system – protein S deficiency, presence of the Leiden factor, MTHFR polymorphism and increased activity of the factor VIII. Undoubtedly, the S protein deficiency played a crucial role in that case. It is considered a very strong risk factor of venous thrombosis, often in a non-typical (organ-based) localisation. In case of the portal vein thrombosis with secondary hepatic injury, the assessment of meaning of the detected low protein S activity may be challenging. A reduced activity of natural anticoagulants (protein C, protein S, antithrombin), observed in those cases, may be a consequence of impairment of the hepatic synthesizing function, thus being a result of thrombosis, and not its cause. The primary, congenital character of the protein S and other anticoagulants deficiency may be indicated by normal levels of plasma clotting factors (e.g. II, X), also being synthesised in the liver. In similar cases, the ratio of protein S and summed activity of the factor II and X multiplied by 0.5 may be applied: [protein S / (f. II + f. X) × 0.5]. If the ratio is < 0.7, it indicates a genetic deficiency of the anticoagulant or its neutralisation by antibodies [2]. In the presented case no signs of hepatic failure were observed, and the clotting time appeared normal, which could indicate a primary character of protein S deficiency. The Leiden factor, particularly its heterozygotic form, is a weak risk factor of thrombosis, and its presence is found also in some percentage of healthy population. Similarly, polymorphisms of the MTHFR gene, causing an increase in homocysteine level, contribute to increased risk of vascular thrombosis. However, their presence is considered a weak risk factor. The increased activity of the factor VIII elevates the risk of venous and arterial thrombosis [7, 8]. It should be noted, however, that the factor VIII is an acute phase protein and its activity rises transiently during the period of activation of an inflammation. In the discussed case the activity of the factor VIII was > 220%, with simultaneously low hsCRP level, which indicates its constitutive character.

Antithrombotic treatment of patients with venous thrombosis of the portal system may pose some significant difficulties. Hepatic injury secondary to the portal vein thrombosis often limits a possibility of application of oral antithrombotic agents (vitamin K antagonists, Rivaroxaban, Dabigatran). Absorption disorders being a consequence of the short bowel syndrome may lead to an unstable blood level of antithrombotic drugs. In the discussed case, a short preserved section of the small intestine, and a highly externalised stomy, have raised doubts about absorption of any oral drugs used by the patient. Will modern antithrombotic drugs offer any alternative in the therapy? Contrary to VKA preparations offering a possibility of monitoring of the antithrombotic effect by assessment of INR, modern drugs, including Rivaroxaban and Dabigatran have no standardised tests allowing assessment of their antithrombotic action. That limits their safe and effective use in case of a coexistent significant alimentary tract absorption disorders or intensified hepatic dysfunctions. Additionally, Dabigatran is a prodrug, transformed into an active form in the liver. It should be also noted that in no clinical trial evaluating efficacy and safety of modern antithrombotic drugs in the therapy of venous thromboembolic disease (RE-COVER, EINSTEIN) patients with organ-based thrombosis were randomised.

In the presented case it seems that the best solution was to carry on the antithrombotic therapy with low-molecular-weight heparin.